WHAT DO YOU MEAN BY RONIN?

We’re not referring to the somewhat forgettable De Niro movie from 1998, “Rōnin” which garnered a Rotten Tomatoes score of 6.3/10. We would use the Wikipedia definition:

A rōnin was a samurai with no lord or master during the feudal period of Japan. A samurai became masterless from the death or fall of his master

So after yesterday, we have a business with no lord (CEO) and no “Masters”. It is a business adrift with a Chairman trying to make decisions that will placate shareholders in the short term, but we feel the board are arguably damaging the long-term interests of those shareholders. Which is an ironic concern coming from someone who is short the stock!

DIDN’T THE STOCK RALLY SHOW ITS PROOF THE SALE GOOD?

We have argued from the start of our blogs on Woolworths (WOW) that Masters was a sideshow to the valuation of the business. The key issues lay in the Food and Liquor division and specifically the true long-term margins for that business. Readers can review our discussion on the topic here. We nominated 2016 as the year they may attempt to sell Masters and assigned at most 10% rally in the share price off the back of it.

Given the stock was up 7% at one stage with the market down 2%, giving 9% relative performance at the high, that forecast seems to be about right!

But let’s just walk through the bulls arguments as to why this was a good thing:

Which all sounds like excellent news. But there is a small catch: What does one pay for a business that is in “de-growth” mode in a highly competitive sector with floorspace growing faster than demand?

One of the reasons WOW traded at such a high multiple of earnings for so long was that it offered a “magic pudding” investment to investors: growing earnings AND a dividend yield AND no resorting to debt financing due to high Returns on Capital. The chart below uses both forecast P/E on a forward-looking basis and realized (as Bloomberg doesn’t have forecasts in for pre-2005). The glory days of this stock saw it regularly trade on a P/E of 20x plus for the reason it was a “magic pudding”.

One of the reasons WOW ended up in Masters was that management was looking for the next growth engine, having largely tapped out Food and Liquor, despite their assertions to the contrary that they could keep growing share.

Because despite what analysts care about – being high Returns on Capital – markets care most about EPS growth, not whether it was funded by debt or free cashflow. 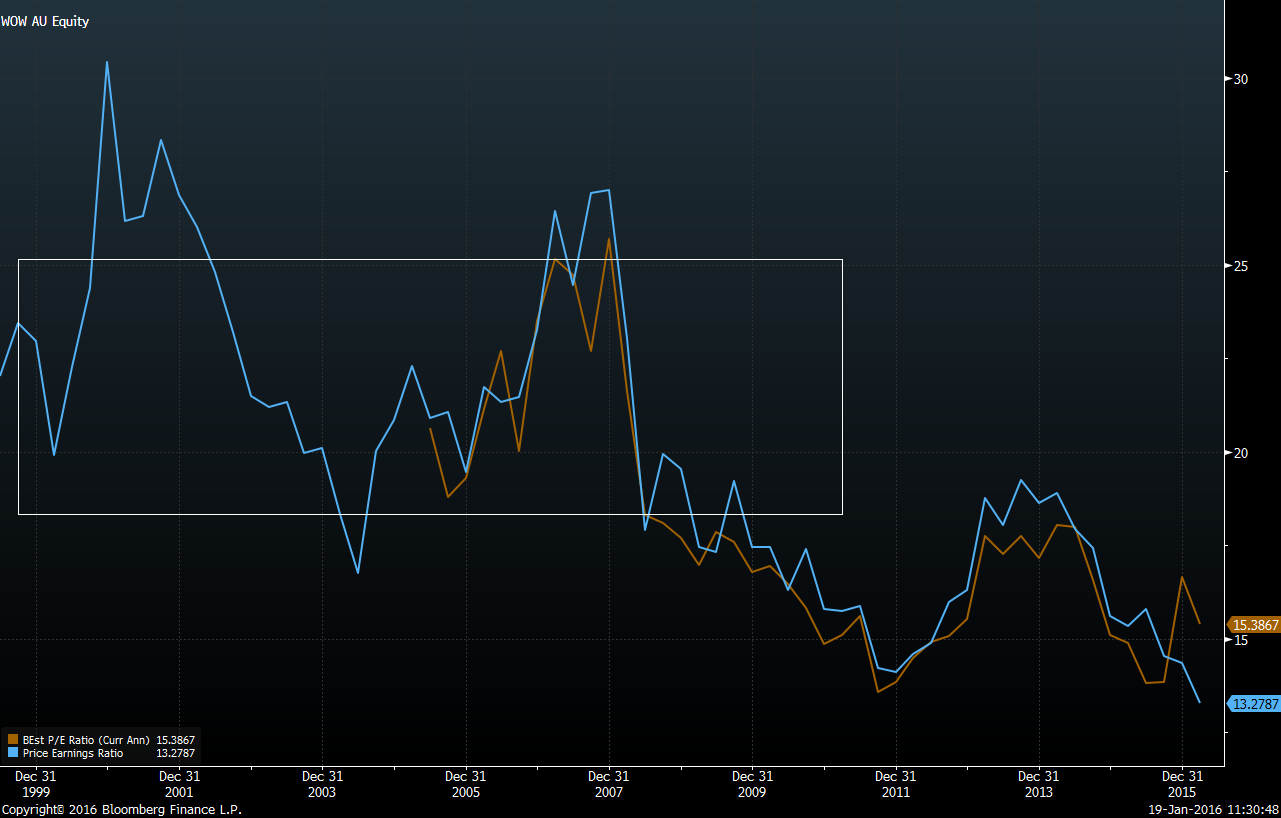 Markets offshore willingly reward stocks for losing money if they believe that the company will generate better earnings longer term. For them, sales are the key focus and Amazon is a prime example of this. As a side note we would say that this is something Australian investors and the marketplace does poorly – a focus on dividends and the “here and now” seems to trump long-term goals. But that’s a story for another day.

For all the troubles encountered in Masters and the issues with execution, the rationale to be there was sound: it is a highly fragmented market that was crying out to be consolidated into a 2 player market (like every other market in Australia!) with few regulatory concerns.  Which is why WOW shareholders may be surprised to learn a stock apart from their one did even better yesterday: Metcash. Because Metcash via Mitre 10 will be able to pick up cheap assets from a forced seller.

Because for all our bearishness on the stock, we are not of the view that this business goes bankrupt, it just needs to realign its earnings expectations with the market growth rates and players. Having walked away from this growth option, no WOW CEO is going to look at going back here for a decade or more, leaving the other players to cut the market up amongst themselves.

SO WHAT IS IT WORTH THEN AND WHERE TO?

One of the Portfolio Managers I started under once said: “there are only 2 types of CEO’s: builders and fixers and companies just rotate between the two”. It looks like WOW is going to be in fixer mode for some time.

So we’d expect once the euphoria passes and attention focus in on what is left, namely a Food & Liquor business that is going backwards and General merchandise business that can’t find a new owner, one has to ask, what P/E does one pay for this?

Well, it turns out we have a guide in the sector, it’s called Metcash. The stock trades on 9x Earnings, compared to 16x for WOW, suggesting that under that scenario the WOW is worth $14 now. I’d argue that’s probably a bit extreme as there is a small cap effect in there, but a general rule of thumb has always been if long term bonds yield 4% and you have a 3-4% Equity Risk Premium, you get an expected equity yield of 8%, which inverted to a P/E 12.5x or for WOW a price of $18.75 using consensus EPS (Which we think is too high anyway, but it doesn’t change the direction of argument as the gap is so large!). With a payout ratio north of 70%, that’s a 5.5% yield. Which all seems about right for a no growth or ex-growth business paying a decent dividend.

And we haven’t even talked about the increased sales Metcash is seeing in Food and that now Coles if they choose, can use profits from Bunnings to fund more discounting in food free from competition concerns. Or that Supermarket food inflation didn’t improve in Q4.