There has been plenty of ink spilled on the rise and fall of Woolworths, particularly following the resignation of their CEO, Grant O’Brien last week. Elizabeth Knight’s article in the Sydney Morning Herald over the weekend provides a good overview of the forays – and the folly of those – post-2008 which led to this current situation.

As global investors, we would hope to provide some international colour for retail investors to help them gauge where to for the stock if they still hold a position in it. We can also provide further background having covered the stock over a decade ago as an analyst. What we won’t do is go into the details of the non-food divisional earnings or the Masters woes – there are plenty of broker reports that can fill in those details.

So firstly, full disclosure and cards on the table – we have been short the stock since early February of this year. We started shorting it around $32-33 only to watch it rise to nearly $35 ahead of its results. At this point, we were questioning our thesis (“someone must know it’s a good number to push the stock this hard ahead of results”) and were forced out of some of the position. We have held the remaining position since then and remain short.

We would disagree with Elizabeth Knight and say the issues at Woolworths actually pre-date Michael Luscombe and extend back to when Roger Corbett was the CEO. She is right in saying the weak nature of Coles under Wesfarmers was the perverse undoing, but Coles even as a public company had higher costs so could not compete on pricing against the more efficient Woolworths.

Often success tends to breed failure through complacency. Woolworths reached 5% EBIT margins in its Food business by 2007, putting it at world-class levels. But a deeper examination showed that if you look at its “Cost of Doing Business” (a measure of efficiency) it was higher than the other top of class peers. Essentially it was getting there by charging higher prices.

Aldi, who is privately owned, recognised this and entered Australia in 2001. Back then, we mistakenly thought it would affect pricing, yet by 2008-10 it still hadn’t. What was happening was it was affecting pricing, just it had not reached critical mass.

So with this running in the background, Woolworths continued to push pricing higher, with Coles for a long time happy for this to happen as they had lower margins to start with.

But the move by Coles with their pricing to be more aggressive, that is to re-invest some of the savings they were making, put Woolworths in the position as Elizabeth describes. By this time the culture of the firm was such that saying you were cutting margins was akin to admitting failure.

The rest is the history in the article.

We had been short Metcash last year on this view that the Australian grocery retail sector was coming under pressure in margins as Aldi reached “critical mass” where it had a real effect on a large enough number of shoppers that price perceptions would be moved and that Metcash would be the first loser from this. By early this year we felt (wrongly in hindsight, given how far it has continued to fall and they were “facing their demons”) that Metcash was pricing a lot of the bad news, but Woolworths wasn’t, so was the obvious choice to move to.

So what does the examples of offshore retailers tell us about the future for retailing in Australia? A lot it turns out – a lot of bad news that is.

If we look at the two major regions of the developed world (Europe and the USA), we can see two trends: 1) There is a “hardline discounter” that operates with good margins. In the USA it is Wal Mart; and in Europe it is Lidl/Aldi (whose margins aren’t published as they are private) and 2) the the rest of the mainline operators have 2-4% operating margins. 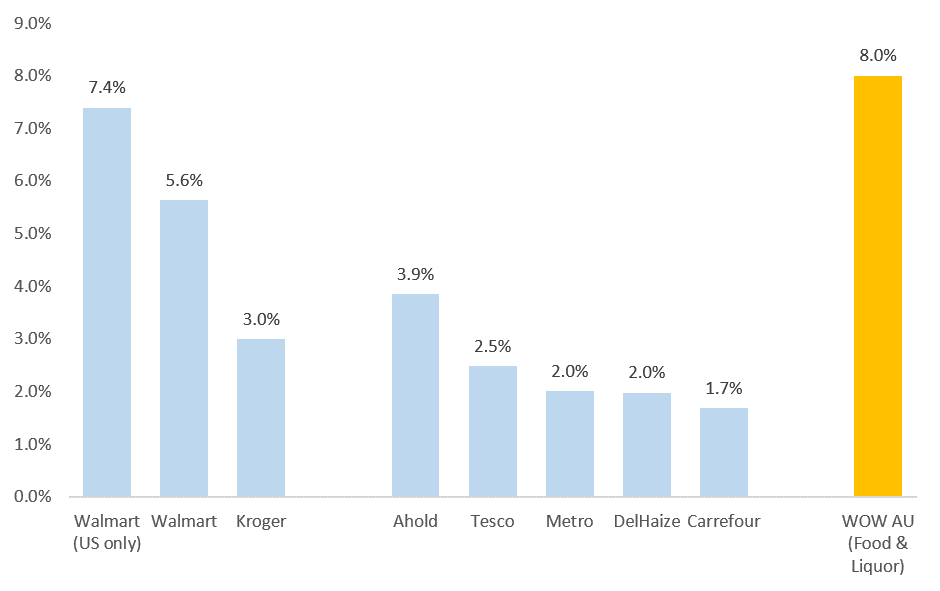 Given what we are seeing and what we know about Aldi’s expansion plans to South Australia and then Western Australia; what we know about the slowing economy (people “shop down” in recessions); and what Woolworths is signalling to us by acknowledging the need to reinvest in pricing – it is hard to escape the conclusion that margins in the Food business need to reset around the 4% level.

If we take these 4% margins and leave everything else the same, the valuation implied in this case would be $18.49. The chart below shows the sensitivity of valuation to different profitability levels.

FIGURE 2 – SENSITIVITY OF VALUATION TO PROFITABILITY

Yet we don’t think Woolworths is mentally ready to take this step, believing that the measures required are much less drastic – a bit more marketing effort; some cards for the kids to drive foot traffic; a bit more promotional activity.

But shoppers are stubborn – once the perception of price competitiveness is lost, it is hard to regain. Customers have seen what Aldi offers and seem to be choosing Coles as their “halfway house” if they do a full shop in one store.

As a worked example we offer Tesco’s in the UK. Now, there are many UK and Tesco specific issues. But there are a number of similarities as well. Both grew rapidly; both were market leaders; and then both suffered more competition and a slowing economy. Tesco’s margins collapsed from 2013 and have yet to recover (they also had accounting issues). 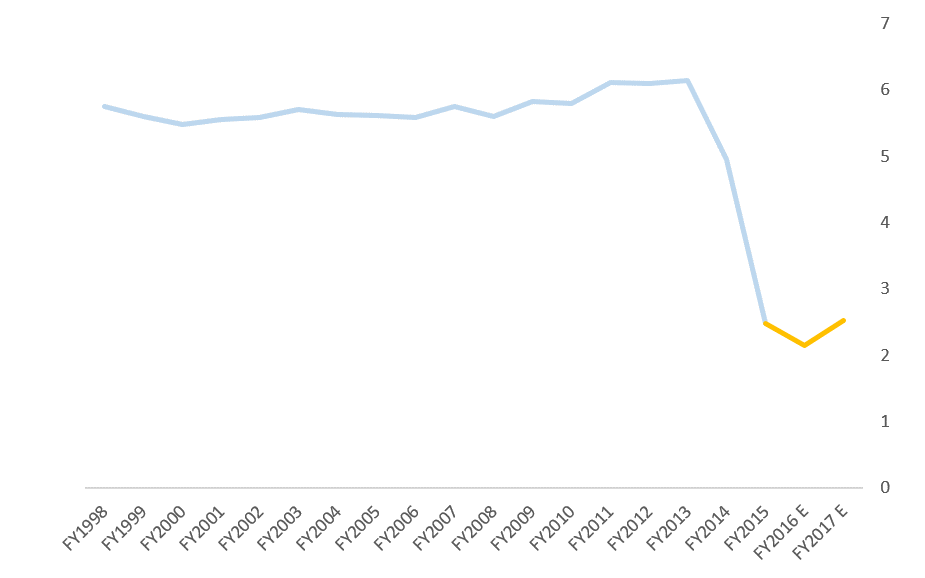 And so let’s have a look at when the share prices of Tesco’s and Woolworths’ versus their local markets are overlaid so start dates are on the same scale.

We will let readers draw their own conclusions:

So for us, we think the large part of the move for now (now being defined as 6 -12 month) is most likely finished on our base case of management’s reaction function. With the stock trading on 14x forward earnings, it is unlikely to de-rate much further and will therefore most likely need more downgrades to fall further.

The path of that future depends largely on how the new management team decides to play things. As we said, we believe they will most likely “kick the can” and hobble together a few short-term strategies, which buys them the time in the red box. But if they do that, they run the risk of following the blue line down.

The other approach is to aggressively confront the issues and rebase earnings and margin expectations. But this may put at risk the dividend or covenants relating to Masters (note we haven’t even discussed Masters here, which is a separate problem).

There are no easy answers to escaping this situation.