What Batting Averages can tell you about Funds Management

What Batting Averages can tell you about Funds Management

Everyone loves a great performing fund, right? The data say they do – money consistently flows into funds that have recently performed well. They are showered with annual awards and often rated highly by the asset consultants who determine what goes into your superannuation portfolio.

But this week, I want to ask: how much is too much? More specifically, focusing on equity funds, what should one realistically expect from a “good” equity fund in terms of performance?

While there are many mathematical models that pull apart returns into components, there is another simple way to look at returns, irrespective of asset class. For a fund’s return for a given period there is a hit rate, gain-to-loss ratio, and weighting. These are like using batting averages and strike rates from sport.

Firstly, one needs to consider the hit rate of the fund. This is the percentage of winners in stock picks. Within equity investing it’s been shown that it is difficult to operate with a win rate much higher than 55 per cent through time. Perhaps why so many of the greats are also very humble! 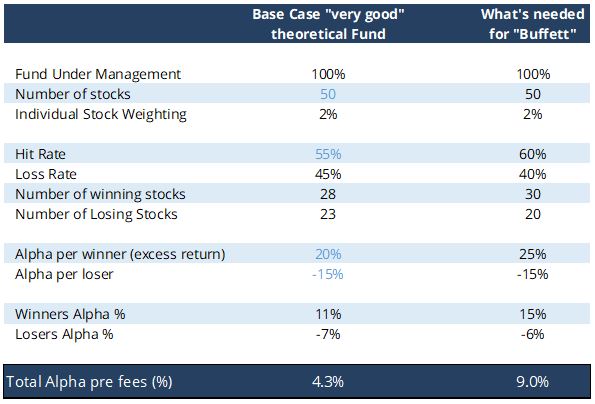 The gain-to-loss ratio is intrinsically linked to the hit rate. This is how much money is made from the winners compared to what is lost on the losers. Think of them as two sides of the same coin. Why? Because a high hit rate often indicates a low gain-to-loss ratio and vice versa.

Selling insurance is a good example to illustrate this. An insurance company could have six years of no disasters, so it’s very profitable. Then in one year, three hurricanes hit and wipe out seven years of profit. This shows a high hit rate (6/7 years profitable) but a very poor gain-to-loss ratio. The point here is that a high hit rate doesn’t tell you much without knowing the gain-to-loss ratios.

In mainstream equity investing, to outperform the index by 15 per cent to 20 per cent per annum, on average, for winning positions would be considered significant (if the market goes up 6 per cent to 8 per cent on average, it implies that your average winning stocks are up 20 per cent to 30 per cent in absolute terms). Conversely, let’s assume on losing ideas the losses are identified early through good risk management and kept to a minimal 15 per cent.

The last input is weighting or position sizing. Generally, funds have more money in their higher conviction investments, the theory being to put the most money in the most likely winners they identified. An alternate strategy is equal-weighted portfolios, which have gained popularity over the last few years and consist in setting all positions to the same size.

Now we can have a go at putting these three variables together. The table shows what a “good” fund could expect. For simplicity, I use an equal-weighted fund here. Take the hit rate, multiply it by the expected pay-off (alpha per winner/loser) and by weighting.

I’m guessing you didn’t think it would be that low (and this is pre-fees). Note that changing stock numbers doesn’t change the outcome. To change the outcome you need to increase the hit rate or the skew (make more on winners than losers) and that shows why concentrated funds are not a panacea unless it improves a manager’s hit rate.

One way to cross-check these numbers is to look at equity market neutral funds (EMN). These are funds that take out the market exposure to leave pure alpha. The return for the US EMN industry averages out around 3.5 per cent per annum (and this includes leverage).

My simple study above has been done on a much larger scale by O’Shaughnessy Asset Management in the US on real managers, as these three variables are easily analysed. What is interesting is that the weakest area for managers is weighting. Fund managers really aren’t great at knowing what their high-conviction calls should be. For readers, this implies that if the pros aren’t good at it with all their resources, then readers should consider just equally weighting their own stock portfolio.

“Hang on,” you say, “I’ve seen lots of funds do better than those numbers you quote above.” The answer is that it isn’t alpha in the stock sense. To quote a cynical colleague, “most alpha ain’t nothing but basis and leverage”.

What they mean is that there are things apart from stock picking leading to a non-apples to apples comparison. It could be using a benchmark that is wrong – for example, a growth investor who only buys growth stocks but compares to a regular benchmark (known as basis risk). Or it could be using highly volatile stocks that create a hidden form of leverage. On the positive side, it could be the use of cash to protect the downside in falling markets. This is one of the tools we use at Morphic to enhance returns on top of stock picking.

So the next time you read about some great stock-picking performance, a dose of  scepticism may help. This is not to say there can’t be outperformance – just beware of fundies bearing (lots of) alpha.

You can find the AFR version of this article in pdf here.