A week of surprises for two dollars (USD and AUD)

A WEEK OF SURPRISES FOR TWO DOLLARS (USD AND AUD)

In the last week, the market has been taken aback by weak economic data in the US, as indeed Geoff Wood, our Head of Macro and Risk suggested it might on Sky Business last week (Morphic has a weekly slot at 6 pm each Wednesday with Helen Dalley on Sky Business which team members rotate through).

The rate of pick-up of economic activity as measured by the Institute of Supply Management Purchase Manager’s Index came in at just 51.5 rather than the 52.5 the market was expected. Meanwhile, non-farm payrolls grew at 126,000 rather than the 245,000 expected. The effect of this has been to push out market expectations of when the US Federal Reserve Bank will start to raise interest rates, from June this year to September, and if you believe Goldman Sachs for example well into next year.

As a result, the US dollar has fallen by about 2.5% from its peak in mid-March against a trade-weighted basket of other major currencies as can be seen below (Figure 1). The exception to this trend has been the Australian dollar which has fallen about 2.5% in the same timeframe, but even it has rallied by about 1% against the US dollar in the last week.

Does this mean it is all over for the USD bull market?

The answer we feel is yes and no…. with a lot also depending on your vantage point.

Looking at the world’s biggest currency trading pair, the US dollar and the Euro, it does look as though for the next few months, things could go the Euro’s way. Historically one of the best indicators of this currency pair has been “surprises” in the relative trends in economic data for Europe and the US. Typically if US data is surprising to the downside, and European data surprising to the upside, this suggests the Euro will rally against the US dollar (Figure 2). At the moment that is the way the data is flowing, but the Euro seems stuck in the doldrums. However it is off its lows, so there could be quite a reasonable rally coming. 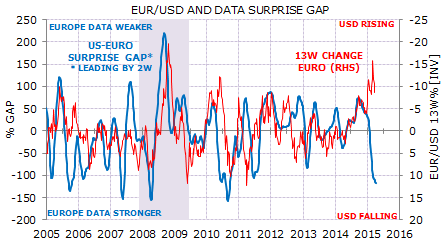 How sustained this is remains to be seen. Last week in some of her commentary, Fed Chairman Janet Yellen still sounded as though she is determined to start the process of ‘normalising’ US short-term rates, even if there isn’t much inflation or wage growth. And it may be that once again US seasonal adjustment factors have not been big enough to offset the effects of an exceptionally poor winter.

One straw pointing this way is US retail sales, which the market expects to bounce by about 1% in March, after falling in February.

A second straw is a very sophisticated non-government controlled survey of inflation in the US prepared by MIT (Massachusetts Institute of Technology) which is suggesting inflation in the US has already started to pick up. The MIT Billion Prices Project uses big data analysis of internet sites to see what is happening in a much broader sample than conventional stats. The Online Index is now showing a sharp lift in inflation that the official data is yet to capture, in one of the sharpest divergences seen since the Project started seven years ago. 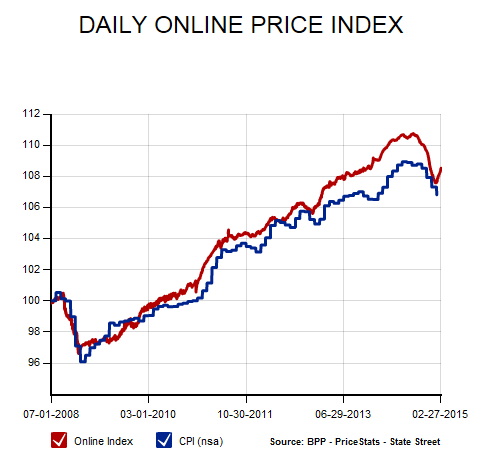 Meanwhile, for the poor old Australian dollar there is little respite, even in the short term, we feel.  The decision by the RBA not to cut rates yesterday has seen the Australian dollar get off its knees, but it has been a fairly feeble rally and the currency has already fallen back from its post-announcement highs above 77 US cents.

The reasons seem to be two-fold: