WHAT COMES AFTER TEXAS?

Having had meetings in Houston, San Antonio, Austin, Nashville, Boston and New York over the first week, the second week was largely based in San Francisco attending Merrill Lynch’s global technology conference. Over two days of presentations many of the large listed technology stocks outlined where they see their markets (and of course why you should buy their stock!). Companies presenting included eBay, Twitter and FitBit from the consumer space through to niche players in software.

San Francisco at the moment is a fascinating place and is a good bookend to Texas at the start of the trip. If the oil and gas players were downbeat and their state adjusting to the change in oil prices, San Francisco is the opposite: bursting at the seams; overpriced real estate and scarce hotels; newly minted millionaires and billionaires; IPOs and start-ups; and complaints about lack of affordable housing for essential service workers. It could have been Perth in 2007! OK, perhaps that flatters Perth too much to be put in the same league as San Francisco, but you get the general idea.

It also reminds you just how many differing business models and sectors there are outside of Australia’s banking and resource driven stock market that investors can diversify their equity risk into. Move some money out of your Australian Equities!

HOW ARE THOSE COMPANIES SEEING THE WORLD?

Moving on from a shameless plug, one has to always keep in mind that these sorts of conferences see something akin to religious zealots come to hear their preachers give a sermon and downbeat isn’t part of the make-up of technology stocks, but some points I’d note are:

1)      The “cloud” is the future of software – dinosaurs versus pure plays: A common thread in presentations was that moving computing to the cloud had only really just begun. Poor old Microsoft seems to have missed this one as well largely and are playing catch-up…again. Why will the cloud continue to be the thing that matters? Because it matches to a business trend of focusing on cost out so businesses are incentivized to move forward in the space from CRM to other areas of their businesses.

The race is being run across different strands with hundreds of names vying to be the leader. The chart below (don’t actually worry about the details – just note there are a lot!) shows all the differing areas players are jostling to be the winner. 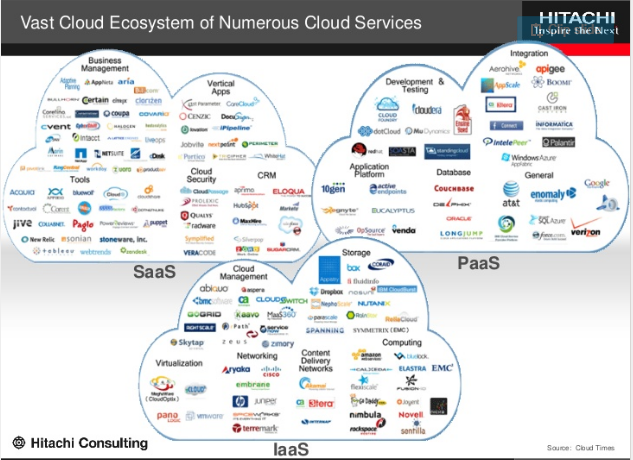 The Venture capitalist panel raised a point that even if the winners of the race are not yet known, the public markets seems to be undervaluing public cloud assets in their opinion. They suggested that Amazon Web services (AWS) could actually be worth more one day than the rest of Amazon as they are the current frontrunner emerging as the dominant player. AWS came up throughout a number of presentations as either partner, or a respected player.

2)      Unicorns live on… just don’t go public: One of the quotes that has garnered over the last few years is that of unicorns, which are privately held stock that is not publically listed, but valued at over $1bn. They’re called unicorns as it is considered mythical/unlikely for a company to be so large and yet not listed. A list compiled by Forbes is here.

After both (public and private markets) running up together in 2012 to 2015, valuations between the two have diverged with public market players (my peers) not willing to pay what they think these stocks were valued at in the private market. By some estimates there is a 50% illiquidity premium now for private companies and valuations 3x higher (those numbers come from Venture capital firms). Some of this is due to higher growth of early stage businesses, but it is clearly excessive as some companies are now unable to raise funds at prior rounds, which is problematic as current investors don’t want to take a write-down. So for those with capital they are trying to wait it out.

The view is that everyone meets in the middle: private numbers come down, but public goes up as evidenced by Oracle spending $600m to buy OPower (cloud-based provider of software to energy sector) that valuations have gotten too low for some of the stocks.

3)      Everyone wants subscriptions: The Holy Grail has become signing up customers onto subscription models. The largest is Apple with their desire to move iPhone customers onto the model for their cloud storage and now Apple Music. But the trend was evident from other players ranging from Pandora (streaming music) through to Autodesk (computer-based architectural design) and Fitbit.

4)      Lock your doors, but don’t forget about the windows: Security was the other big theme. To quote one presenter “someone left a server unsecured in Bangladesh and someone stole $80m that’s why it’s important” . With everything connected, it’s the weakest link that gives access to the whole system. Businesses are rightly very concerned and those companies that can integrate security software well are highly sought after.

Some readers may be old enough to remember the above line from 1984 song by The Cars, but driverless cars and Artificial Intelligence was probably the most interesting of sessions from a general interest perspective. In the short-term there are few pure play ways to invest in the idea, but the form and shape of how cars evolve will affect everything from the obvious (the auto industry) to the less obvious (property developers – after all our cities are built around the idea of us owning cars to drive. Change that and you change a lot of things).

The session was run by Fei-Fei Li, Director of Artificial Intelligence (AI) at Stanford and for those interested they can watch her TED talk here.

I strongly recommend readers to take 20 minutes of their time to watch this video to understand what is perhaps the largest challenge facing AI and driverless cars going forward, that being “visual context”. For those who don’t have the time, the summary is this: a crumpled paper bag and a rock look the same to LIDAR (the radar used by driverless cars). Yet a four year old knows that a paper bag won’t hurt the car or them, but driving over a large rock will. So they are using a neural networks system which are able to develop software that can recognise objects.

She also tempered expectations of seeing driverless cars just yet, but pointed out that Google has driven 1.5mn miles, but Toyota cars do 1trn a year. It’s a long-tailed problem as you just don’t get many incidents of two kids chasing a ball or a broken water pipe.

Also interesting is the differing approaches companies are taking. Google has taken the stance that says just take all humans off the road as they are the ones who make errors. Toyota is going the “guardian angel” approach where the car is there to help the human.

The good news is that neural networks and deep learning, combined with computing power should see these issues overcome in the next five years. That then sets-up the scene for how are our cities and societies set-up for this? And the answer is terribly. A little known statistic is that the number one employee role today is the same as 100 years (3mn people in the US today and 70mn worldwide) – transportation worker. Cities are built around people driving their cars somewhere and parking them. People actually use their cars less than 10% of the time. My view is as worthless as any, but I would simply suggest that a large number of companies are not set-up for this.

San Francisco today represents the race between technologies to get productivity growing again (it has largely evaporated globally and hence the discussions on “secular stagnation”) and our dwindling reserves for the future that we can pull forward to today – also known as increasing debt. Because that is what lowering interest rates and increasing debt relative to income is at a national level: it’s pulling your future growth from the future to today. You experience the returns you would have otherwise had in the future, today.

The hope is we can buy enough time to get productivity growing again.

HOW DOES THIS TRANSLATE INTO INVESTMENTS?

There’s a joke in marketing that “50% of marketing is a waste of time, you just don’t know which 50% it is”. In many respects investing is similar. You follow leads up roads that initially look promising that often end up at a dead-end. On the other hand a new avenue can open when you least expect it.

Since Morphic has a “value bias” as a firm, most of these technology stocks aren’t ones we would own on the long side. The point raised earlier was that all these players are jostling to be the leader, but the experience of the Tech bubble of 2000 was that, yes, a leader does emerge (Google, Amazon, even Yahoo for a time), but 90% of the other players disappear in that process.

Some of these stocks are candidates for shorts when markets lose their enthusiasm for everything unicorn like. I’d nominate one as Box (BOX US). They operate in the cloud providing a content sharing platform for file storage. Which is great, except they don’t make any money. And they have never made any money, losing EBITDA every year and expected to keep losing through to 2018. Patience seems to be running thin in markets with the stock down 50% since floating in 2015. The sharks are circling as well, with the short interest up to 30% of the stock, so clearly others have reached the same conclusion.

On the long side, we would prefer the boring old companies that make things, like Texas Instruments (TXN US). In a world where there is a computer chip in everything, they are a dominant player in those chips that go into industrial usage like cars. On 19x earnings it’s not cheap, but it is OK value for what you get. As a bonus they do something you don’t see a lot in tech stocks (that are actually growing and don’t destroying value, unlike Microsoft) they pay a 2.4% dividend yield.

And finally, if I was to nominate a stock that could overhaul the landscape (other than AWS), it would be Lending Tree (TREE US). Importantly, for those following the saga, it is not Lending Club (who is one of thousands of financial services companies who are on their platform).

Analysts usually cover sectors and sometimes stocks fall between two sectors and this is one of them, as it’s a technology stock that is grouped with Financials. As such it leads to some confusion on the business model.  The easiest way to think of this company is that it is like Expedia but for financial services. They are in the moving business not the storage business.  On TREE, you go on to get quotes on mortgages, car loans, etc. Banks are keen to use them as it lowers the acquisition costs of customers, but longer time, like Expedia, I suspect TREE will come to own the customer instead.

With low single digit market share; little in the way of mortgage penetration; and Millennials preferring not to do face-to-face interactions, it could be the long-shot play at a not overly demanding 10-11x EBITDA.