Thoughts from the road: Texas, Oil and Qantas

Thoughts from the road: Texas, Oil and Qantas

This week’s blog comes to you from deep in the heart of oil country: Texas. I’ve been over in the USA seeing the management of companies that Morphic owns shares in and attending some global conferences whilst here.

The first was the UBS Oil and Gas conference, fittingly held in Texas, though with a twist, in Austin. For those readers not familiar with Texas geography, Austin is the capital of Texas and also in some respects a microcosm of what makes the USA such a dynamic economy. Austin is not known for oil, rather it has always been a university town with the University of Texas campus here teaching 50,000 students (they do everything big in Texas). It also has a reputation as a live music centre (and hipster haven) and hosts the “South by Southwest” (SXSW) festival, which is why it’s a left leaning blue city in a sea of red!

What has happened over the last 15 years is that a large number of Tech companies have set-up here to take advantage of the low taxes; cheap land compared to Silicon Valley and plentiful supply of graduates. The city was the fastest growing metropolis in the USA last year and one has to only look around at the skyline of new office towers to see the evidence.

I mention this because it’s a story that just wouldn’t happen in Australia. The equivalent analogy would be for corporates to relocate from North Sydney to Wagga Wagga or Launceston on lower costs and expand employment. Instead Australian corporates persist in funnelling into Melbourne and Sydney…

How is Texas faring?

As a firm Morphic hasn’t held strong views on the oil sector, with the only investment of note being a short on some Texan banks, which was closed out last month. I met with two of the banks this week – which on one last sidenote, is interesting as despite being a small firm we get great access over here to CEO level meetings as they are just bewildered by the idea someone flew 18 hours to meet them. I’d suggest if we were New York based I’d get investor relations only.

Management meetings confirmed the price action in the stocks. Namely, that energy loans whilst seeing impairments and losses, particularly in the Exploration and Production (E&P) segment, at around 5% of energy loans for one bank and 15% for the other, just isn’t seeing spillover into commercial and residential of note outside of Houston. Our base case had been that “second round effects” of job losses would impact residential and commercial property markets, particularly in Houston.

Even in Houston the effects thus far are localised – there seems to be a clearly defined “East” (hospitals and healthcare) and “west” (oil corridor). We are usually sceptical of “this time is different” statements as that was the case for why Houston would fare better, but a year into it, one has to admit that it does seem to be different to the 1980’s. Below is an excerpt from one of the banks presentations. 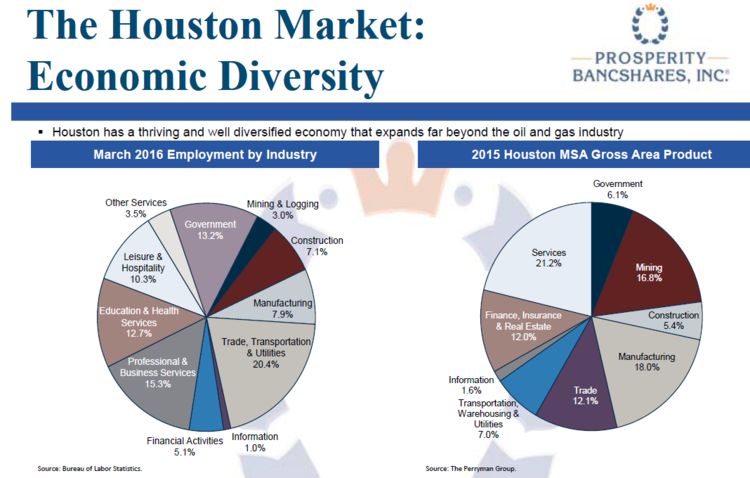 And with loan to deposit ratios of around 50% (no that’s not a typo – compare that to Australia!) they clearly won’t have a funding issue any time soon.

But what has been coming through loud and clear over the two days of company presentations is that oil needs to be sustainably above $50 for a few months before they consider adding any CAPEX back. Take Hess for example. They are a $19bn E&P player with production in the US shale oil region called the Bakken (this accounts for 30% of production). They previously operated 8 rigs to produce that oil. As of this week they are operating 2 rigs. Since there is a decline rate at the shale fields that is much higher than traditional oil fields, they need 4-5 to maintain output. They said they wouldn’t go back to 4 rigs until they saw a quarter above $50 and it would need to be above $60 to make economic sense to get to more than 6 rigs. If nothing changes they will produce less next year than this year, and even if it does, the ramp up time would mean it will be 2017 even if oil goes above $50 and stays there now

This story played out across the other presentations – the oil producers are running CAPEX below replacement level – with the continuous theme of “balance sheet repair” if oil stays in the $45-50 range.

WHY DOES THIS MATTER?

Oceaneering International, which does subsea and offshore installations, had a good slide that summarises the predicament nicely. Globally in 2015 the world needed incremental new barrels of 2.5mn to balance supply and demand. It was well above this at over 3.5mn, so the already large 2014 surplus grew further, precipitating the price declines. Now in 2016, 3mn bbl/d will come from new production of things that were underway last year and couldn’t be stopped and the decline from old projects will increase to 3.2 – so a small deficit but since there is a lot of oil in storage, no problem.

But in 2017 with all the CAPEX cuts (most large players talked CAPEX down 40-50%) new fields will only bring 2m on but old ones will have 3.5m of declines next year.

It is a market that will rapidly shift from surplus to deficit if nothing changes. Now this is quite different say to the Iron Ore market. We have seen that production doesn’t fall much despite large price falls and mines have long lives.

What it says is that unless Saudi Arabia or Iran can bring even more production online the price trajectory is likely to remain upwards. And even if they do production online, it is probably needed to stop the oil price rising. Because despite all the talk of the world going green, oil demand this year is set to be up 3mmbpd (see Figure 3 below for YoY change to end of April) and US Gasoline demand just surpassed the 2007 peak, suggesting that lower oil can still stimulate demand. Shutting off that demand will probably require higher prices.

FIGURE 3 – GLOBAL OIL DEMAND IN MILLIONS OF BARRELS PER DAY

SO WHAT IS THE TRADE?

Oil stock never fully reflected the sub $30 price and whilst this has provided some upside leverage it hasn’t been spectacular. During the protracted sell-off, oil futures were always pricing in recovery – and were much higher than spot prices. For example, if, back in November 2015, you bought a June 2016 contract betting that oil would rally, you are still under water on that trade.

There is one sector that really did benefit – airlines. They were able to keep a portion of the gains and decrease prices somewhat to stimulate demand.

We had been long Qantas in 2014 as a “self-help” story at $1.30. Regrettably we “disembarked too early” before $2, as we never really had the oil price fall as a base case in our investment. Fast forward to 2016 and it has become well loved by the sell-side. But perhaps the ultimate kiss of death came from IATA, the global airline body, with the awarding of their CEO Alan Joyce with the “CEO of Year Award”, cementing the rehabilitation of Qantas!

Yet now we have and Australian economy where wages are growing at less than 2% YoY, so there is no real ability to absorb higher prices; the Australian dollar has fallen and Qantas does better out of outbound traffic than inbound; they have committed to a large CAPEX bill for their 787’s; and Qantas themselves have suggested demand may not be there.

If oil moving above $60 is added to the mix, it is difficult to see the stock doing well. You may say the stock looks cheap and they are buying back shares, but we would counter that you should buy these stocks when they aren’t making money and look expensive – like at $1.30. Companies also generally have a poor track record of timing their buybacks.

So we are short the stock now. Risks are: oil price forecast is wrong (probably via a large Saudi increase); Inbound tourism offsets weaker domestic; or that pricing can pass on costs without a demand effect.