If This is Failure - Give Me More - Morphic Asset Management

If This is Failure – Give Me More

If This is Failure – Give Me More

After a week in Tokyo – the thought arises: “If this is failure – give me more!” A stunning, safe and friendly city. An economy enjoying its best, most consistent growth in a decade and unemployment at previously unimaginable lows.

With a stock market trading at low multiples, despite being at 20 year highs, surely there must be enticing opportunities? Next week we share more detailed thoughts on the dozen companies we visited over the week, where the major focus was housing and construction. But for now we start with some macro reflections.

When we first visited Japan in the 1980s, Japanese politicians and business leaders expected to dominate the world – and many outside Japan feared they were right. The Nikkei stock index rose to nearly 40,000 and families took 100 year mortgages on tiny homes to get into a soaring property market. Over twenty years the yen quadrupled in value against the US dollar. Foreigners winced at submitting their business expenses and taking a vacation in the land of the rising sun was laughable.

In the 1990s every bubble burst – and never in our lifetime had there been such bubbles. Vaunted financial institutions and businesses dating back to Japan’s Meiji Restoration industrialisation of the 1870s went bust. Asset prices collapsed – and kept falling. Wages stagnated. Public debt ballooned. At all turns, the government and the Bank of Japan (BOJ) seemed to do too little, too late. At each hint of a recovery there was a policy error, like a tax hike or premature monetary tightening. 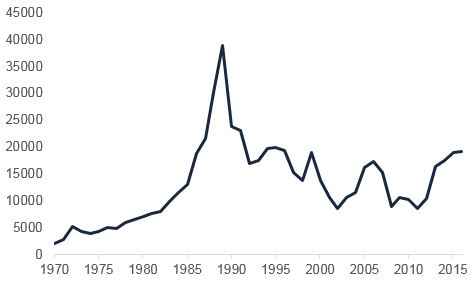 But the scars live on. Tokyo’s gain has been Japan’s pain, as the capital economy and population grew at the expense of the rest of the country.

Pessimism pervades to a perverse degree, sometimes the effects are Monty Pythonesque. Bureaucrats delight in ‘always looking on the dark side of life’. Official gloom about the imminent extinction of the Japanese race is a prime example. Many departments still do forecasts using fertility rate data from the 2005 low of 1.26 children per woman, despite the fact that it had already recovered to 1.43 in 2013 and UN estimates are for it to continue to climb even if not quickly enough to the deemed ‘replacement rate’ of 2.1.

In late 2012, a frustrated populace turned to an unlikely hope: a failed former prime minister, with what many found a disturbing agenda for constitutional change to allow Japanese forces to fight overseas. Shinzo Abe proposed three arrows to break the decline: a big lift in public spending; new BOJ leadership committed to massive money printing to end deflation; and a broad agenda of structural reform, including improved corporate governance and boosting female participation in the economy, both of which badly lag standards in other rich countries.

Five years on the record card of so-called Abenomics probably scores a “B” plus. Some may see even this as generous, perhaps underestimating the scale of the challenge. Nevertheless as this chart from MAM director Gerard Minack makes clear, Japan has been growing above its ‘potential’ ie, non-inflationary, growth for most of this decade. Even the trend rate of real GDP may be picking up. 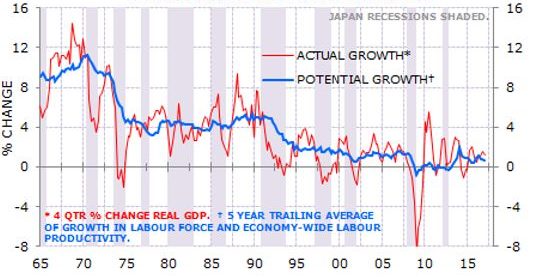 So where is the inflation? With modern Japanese pessimism, most companies we saw feared rising labour costs and stagnating selling prices! In our view the biggest risk is that feeling pressure from a tightening US Federal Reserve, the BOJ turns off the printing press too soon again. This would be a shame as not only are we ‘not there yet’, the money printing and government bond buying has eased anxiety about Japan’s massive public debt, a large part of which is now owned by the BOJ and will inevitably be ‘forgiven’.

Engineering and construction companies (which trade on very low multiples) worry employment conditions will peak once twin tailwinds from the Fukushima nuclear clean up mess and the Olympics start to fade.

Nor do many factor in further home price appreciation after the gentle rally since bottoming a decade ago. This is despite the fact that – unimaginably to Australians – interest costs on a home loan are a third of rental costs, and that even allowing for loan repayments, the full cash cost of ownership is no more than rental payments.

We will discuss the opportunities that this raises next week as well as the risk that a premature fiscal clampdown may abort much needed infrastructure renovation outside Tokyo. Finally we will assess progress on structural reform, focusing on corporate governance and capital management.

However our initial conclusions are two-fold: