The least understood word in finance

The least understood word in finance

One of my favourite quotes used by Gerard Minack, a director of Morphic and Ex-Head of Developed Markets strategy at Morgan Stanley and well-known bear, is that “we’re just all different denominations of the same church”. That being the house of mammon.

Much like a religion, internecine wars often rage between equity investors and bond investors; hedge funds versus long only; value versus growth; etc. Each is adamant that their style is the correct interpretation of how to make money, when in reality, to an outsider, the differences would appear trivial.

Over my career, I have found it instructive to break bread with other denominations regularly to see how their world view differs from mine: the real world isn’t split into nice little silos of asset classes that the finance industry works in. I try to regularly catch up with Vimal Gor – Head of Income & Fixed Interest at BT Investment Management – who is a fantastic investor, to hear how he’s seeing the world (which we have often differed on!).

I mention this because I think the least understood word in finance comes from bonds: duration. Duration is used by bond investors to describe the sensitivity of the price of bonds to changes in interest rates and it’s usually expressed in terms of years. Why is this relevant to an equity investor like me? Well because all assets have duration, it’s just that they aren’t as easily measured as bonds which have fixed lives.

GMO, the esteemed investment house out of Boston, put together a nice chart comparing their “best guesses” of the duration of different assets (Figure 1). Note these moves assume no change in cash flow, which for stocks in particular will be quite relevant (bonds clearly don’t change): 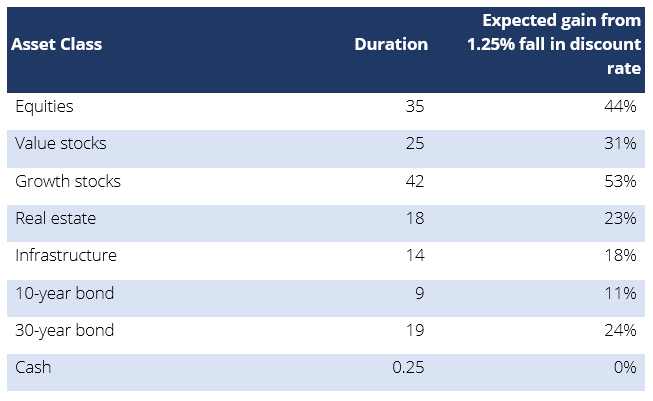 What’s remarkable is how closely the real world has moved to reflect this. Let’s consider Sydney/Melbourne property –that should get everyone’s interest!

In 2011 the RBA cash rate was 4.75% and today it is 1.5%. If we assume the discount rate is the cash rate (a fair assumption given the percentage of variable loans), the expected rise of Sydney house prices is…..more than 60%. Allow for a little inflation over 6 years and you get close to the Sydney and Melbourne growth numbers.  For all the talk of immigration, underbuild etc – a simple duration calculation explains returns quite well.

What if we look in my “backyard” – equities? According to GMO, growth stocks should outperform value stocks, for a 1.25% change in discount rates, by over 50%. If we assume the relevant discount rate here should be US 30-year bonds we see that since 2009 US 30-year bonds have fallen from 4.9% to 2.9%.

Now if we look at the US and compare the Nasdaq tech-heavy Index against the S&P Value Index (Figure 2), you can see the Nasdaq has outperformed its value peer by around 50%, a little worse than the expected duration change effect.

So again, for all the talk of revolutionary new Tech disruption, differences in duration do a pretty good job of explaining the difference in returns. 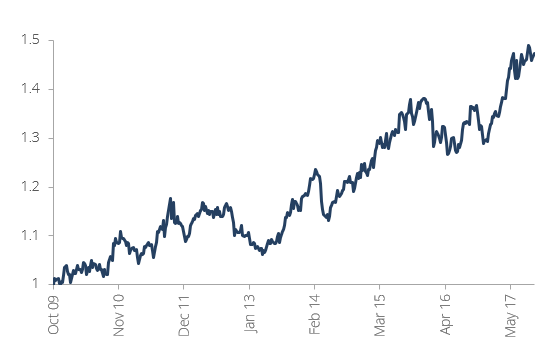 SO WHY DOES THIS MATTER NOW?

It matters so much now because, for the first time this cycle, most parts of the world are experiencing economic growth simultaneously. Not only is the US recovery firmly underway (along with its hiking cycle), but Emerging Markets, China and even Europe are growing. Despite the sluggish wage growth, here in Australia, we have seen a run of jobs creation data that implies we are growing faster than the US on a size comparable basis.

So as 2017 draws to a close and we turn our attention to 2018, it sets the scene for 2018 to be the year that we see sustained withdrawal of monetary stimulus, be it QT or hiking of rates in some countries.

One doesn’t need to call for a calamitous crash to also believe that some of the winners from the cutting of interest rates may be losing bets in 2018. It will come down to which parts of the interest rate curve move and how much.

The long-suffering value managers, who tend to own more cyclical stocks which have a shorter duration, are probably likely to outperform their peers and win awards (though few are likely to thank duration). Growth stocks, such as Facebook or Amazon are likely to be the losers compared to these value stocks.

Looking at Australia, expect the Cochlear type stocks to perform worse compared to something like Macquarie Bank or Caltex.

And what does this mean for Sydney/Melbourne property? Well, it’s not a great asymmetry: even if you believe rates aren’t going up much, that implies a flat year. If you think 25-50bps (current market pricing) that implies an 8-10% fall in prices in 2018 using the same duration assumptions.

This article was first published in the AFR in a column written by Chad Slater.

CHAD SLATER
Joint CIO, Morphic Asset Management
17 years experience in financial markets.
Chad co-founded Morphic Asset Management in 2012. He was previously a Portfolio Manager and Head of Currency and Macroeconomics at Hunter Hall for five years. Prior to this, Chad was an Investment analyst at BT Financial Group including a secondment to Putnam Investments in Boston. He began his career as an Economist at Australian Federal Treasury.