“You can see the computer age everywhere but in the productivity statistics.” – Robert Solow (1987)

“Technological innovation seems to be moving faster than ever, from driverless cars to robot lawyers to 3D-printed human organs. The not-so-good news is that we can see technological breakthroughs everywhere except in the productivity statistics.” Christine Lagarde, IMF (April 2017)

Barely a week goes by without the media reporting breathlessly about a new start-up innovating with a new app of some sort. Our Prime Minister exhorts us to become a “Start-up nation” and Fund Managers present to clients about all the change in the world.

At Morphic we prefer to focus on the numbers rather than the narrative, and the numbers just don’t match the story. Solow’s [1] insight remains as valid as 30 years ago. Trend productivity has fallen from 1% to 0.3% per annum. This may seem small, but over ten years that difference equates to a country the size of Japan “disappearing” from the world economy.

For many readers, this lack of “real numbers” may come as a surprise. Maybe it is on the cusp of occurring but, for now, there is no evidence.

The IMF discussion paper nominates three headwinds which are causing this: an aging population; slowdown in global trade; and aftershocks of the GFC in the global system. There are clearly other suspects (an Austrian economist would add debt), but I’ll nominate two more in particular: Facebook and Silicon Valley. [2]

Isn’t this an odd choice? Surely they are the home of innovation? Matt Stoller recently wrote an interesting piece lamenting the state of Silicon Valley. His main contention is that key players in the valley are now so large, they have become monopolies. And when businesses become monopolies they stop innovating and spend more time defending what they have – through litigation or through buying out competitors:

The great business historian Alfred Chandler, in his book on the electronic century, called antitrust regulators the “Gods” of creation. Antitrust was originally understood as a uniquely American “charter of economic liberty”.

But there hasn’t been a Sherman Act Section 2 anti-monopolization case for 15 years. And the anti-merger Clayton Act is not being enforced.

For large firms, tweaking what they have is much more profitable than ripping up their business model. Hence why the iPhone is largely unchanged in ten years.

One of the paradoxes of capitalism is that it works best with strong regulation. Not over-regulation, but no regulation isn’t great either it turns out.

Which brings us to the title of this blog. Whether you have heard of the Austrian born US economist Joseph Schumpeter or not, there is a high probability you have heard of his concept of “Creative destruction” and the role of entrepreneurs in capitalism. What is lesser known in “Capitalism, Socialism and Democracy” from which the quote comes, is that Schumpeter ultimately finished the book on a bleak note suggesting that capitalism will tend towards “corporatism” which would be the undoing of capitalism. His prediction was that we would evolve into an environment that would become hostile to entrepreneurs through over-regulation. What if he was on the right track, but got the conclusion slightly wrong and it is an emerging set of monopolists who are causing the lack of innovation? The Bureau of Labor Statistics complies data in the USA and you can see a steady trend lower in the percentage of the workforce working for smaller businesses. Again this would seem to be at odds with all this talk of Venture Capital and Start-Ups. 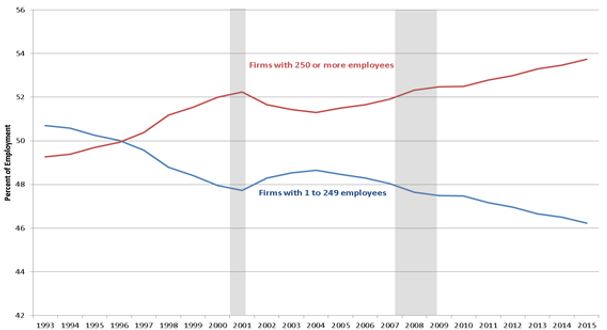 Source: US Bureau of Labor Statistics

So what’s the solution? A Trump administration breaking up Google and Facebook could be the great small job creation process Republicans say they desperately seek. After all, as Matt Stoller notes, it was a Republican administration (!) that set in motion the creation of part of Silicon Valley today.

In 1956, a Republican administration and AT&T signed a consent decree forbidding AT&T from competing in any but common carrier communications services. The decree also forced AT&T to license its patents in a non-discriminatory manner to all comers.

One of those patents was for something called the transistor, which two small companies — Texas Instruments and Motorola — would commercialize.

Sadly I think this is quite unlikely as the administration sees any form of regulation as bad. For equity investors it means that returns stay high in those businesses, paid for with the cost of lower growth across the rest of the economy, which ultimately comes at a high cost to the economy.

NB: this is an obscure topic, but if you do find it interesting and want to read more, we have obtained permission from an external consultant we use, The Macro Strategy Partnership to post a copy of their research on this topic on our website:

The productivity paradox, part I

[2] I will leave for another discussion the merits of whether posting on SnapChat and watching cat videos adds or detracts from productivity.