One thing that sets Morphic apart from many of its peers is our ability to profit from fundamental analysis that suggests that a particular company may be overvalued. Unlike many funds, we are able to short sell when our analysis suggests an attractive probability that the share price may soon fall thus enabling us to buy back the shares more cheaply.

US-based electric automotive and solar cell manufacturer Tesla is one such opportunity that we have been shorting during the last six months. To be clear, we are supportive of allefforts to reduce any of the clearly negative environmental impacts of humankind and we applaud CEO Elon Musk’s aims in this regard. Whilst it is conceivable that Tesla one day produces many 100,000’s of electric vehicles annually, our point is simply that the valuation of Tesla is too high relative to the inherent risks that the business faces currently, particularly in light of its acquisition of Solarcity.

This week our investment case has found unexpected (but welcome) support from a rather surprising source. Morgan Stanley (MS) has been one of the most prominent in helping Tesla in its recent capital raisings. Coincidentally, the MS analyst that covers Tesla has long been supporting their investment case with a price target consistently well in excess of the share price (see Figure 1 below). This enthusiasm has started to wane recently with the analyst’s recommendation reduced from over to equal weight in June. 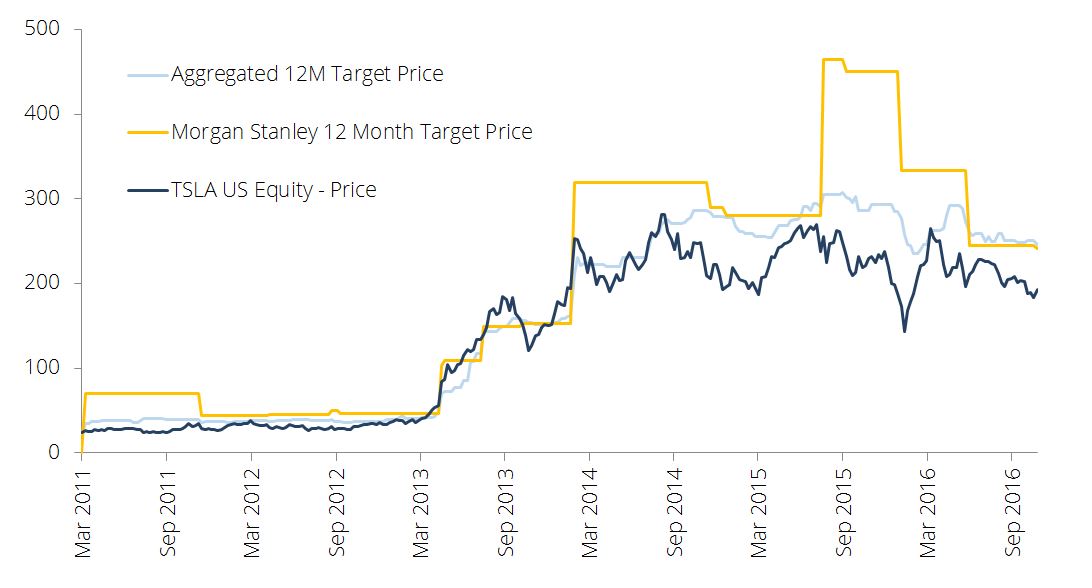 Ordinarily, we would not read so much into a change of opinion from a single analyst of any company. However in this case, where the CEO fights so hard to control an optimistic narrative that is required in the absence of positive fundamentals such as profitability and cash inflows, we argue that the disproportionate media commentary that typically follows any change in analyst opinion has an extraordinary impact on sentiment, in part because of the highly active retail investors.

In this week’s downgrade, the analyst re-iterated his equal weight recommendation and lowered his price target from $245 to $242. Given the marginal reduction and the opportunity of almost 25% upside, why is this “news” worthy of a Morphic blog? That this appeared a non-event to most commentators will have surely been welcomed by Tesla but as is often the case, the devil is in the detail.

HOW TO DETERMINE TESLA’S TARGET PRICE?

Let’s examine exactly how the MS analyst derives his Tesla price target. He values the various components of the company under three scenarios. The following table illustrates how these components have combined to give the recommendation and price target, and their progression since May:

Note that the bear case has consistently attributed only $50 per share of value to the Core automotive business and zero to Energy activities and the conceptual Mobility business.

Four key takeaways from the Figure 2:

So, with Core value down, and Energy, an actual business, only worth a little under the most optimistic scenario, it sounds like the direction of change is bearish.

We find the valuation suddenly attached to Mobility to be a little strange given we have seen no evidence since May that this concept has moved further towards being a real business. The premise of this concept is that a proportion of the future fleet of Tesla’s will generate income for both owners and the Company via on demand ride-sharing. The $76 per share, or circa $13bn valuation comes from a 12 year DCF model and we note that 75% of this value is the terminal value (WACC of 15%). To us this appears at best naïve, at worst reckless.

On the basis of the new found value of the Mobility concept, we also find it odd that the analyst has not returned to his previous overweight recommendation, because, applying his previous methodology, the midpoint between the Base and Bull valuation is now $318.

We would not be surprised if at some point in the future this analyst defends his apparent over optimism (in the face of a significantly lower share price) by referencing his base case valuation of the Core business. And just to keep our cynicism in check, we must remind ourselves that there is categorically no relationship between the analyst’s actions and his fellow investment bankers. He simply must have a higher quality crystal ball than we possess.

As much as we would like to own a Tesla (not a Model X!), this development only serves to increase our conviction that we will not be owning the company at anything other than a much lower valuation.