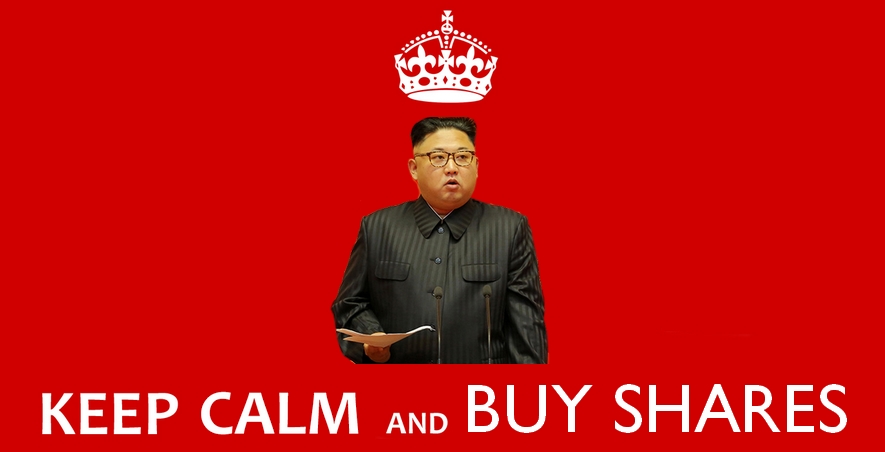 A few weeks ago, US Ambassador Nikki Haley to the UN intoned that “the North Korean can couldn’t be kicked any further down the road because there was no more road”. But a few weeks seems to be a long time in rhetorical road building because the can has just had another boot applied, and is still on terra firma.

Many investors ask us why we don’t tend to get more nervous about potentially catastrophic geopolitical events.

This note is a brief description of why we try to stay calm even in the face of potentially devastating instability on the Korean peninsula, and what might make that wrong. For the record, we used recent jitters to slightly top up our investment in Korea’s largest company Samsung Electronics, which makes it now the largest holding in our portfolios.

I first had to contemplate the implications of tensions on the Korean Peninsula and their potential resolution in 1990. In most regards, nothing has changed. That doesn’t mean it never will – but probably not for some time.

That year, when I was still a journalist at Euromoney magazine, I was sent to Seoul to write about the financial consequences of the Koreans copying Germany and reunifying. It must have looked like a smart idea from the distance of London, where people were still excited about the end of the Cold War and the demolition of the Berlin Wall.

In Seoul, it quickly became apparent the proposition was laughable.

The South, with its population of 45m or so had a per capita income generally estimated at eight times as much as that ‘enjoyed’ by the 25m in the North. Having only just escaped extreme poverty, itself, however it could little afford the cost of investing in the North to bring it up to its level quickly or cope with an influx of starving northerners moving south. So few in the leadership had any real interest in reunification, even if they had to go through the motions of aspiring for it in public.

In North Korea, the ruling elite would lose all their privileges if not their lives if their regime collapsed, so they would never support reunification.

The other four interested parties also had no real interest in demarche. China didn’t want a western-leaning democracy on its doorstep. Russia didn’t want to lose a distracting irritant to the other superpower, the US. The US didn’t want to lose valuable forward bases in Korea and Japan that were nominally justified by a belligerent Pyongyang. And Japan didn’t want to lose a fully engaged US military in the region. Nor did it have much appetite for a larger northeast Asian economic competitor.

Pyongyang has buttressed its position through nuclearisation. “Rocket Man” Kim, as President Trump has undiplomatically dubbed him, would know his chances of preserving power, wealth or indeed his life would be negligible under a united regime.

South Korea could probably afford to integrate the North now, but the challenge from internal migration would be acute, given per capita GDP in the south is now at least 20 times higher than the north.

Japan might worry less about Korean reunification than in the past, given the greater threat the present situation poses than in the past. The increased challenge from China now also justifies the retention of US bases in Japan to both Washington and Tokyo. A resurgent Russia, however, would probably be more opposed.

The Chinese dilemma is exquisite. Many in the Beijing leadership probably hate being held hostage by Rocket Man. But to give him up, would entail a loss of face. There would still be no interest in a country with a western orientation being directly on the border, even if it was agreed US bases would be closed.

Sadly the most likely way this impasse changes is by accident. And it is almost impossible to manage money in preparation for that kind of discontinuous event.

Challenger superpowers like China are highly prone to start wars. Sometimes this is to distract from temporary economic setbacks, like the three wars Germany fought against Denmark, Austria and France between 1860 and 1870. Sometimes, like emerging Japan prior to WW2, wars can happen because a field commander can make a blunder and no one at the capital wants to lose face by bringing him into line.

Pyongyang has too much to lose from deliberately attacking anyone, but what if a rocket veers off target and lands in Japan or South Korea? Or someone in the line of fire erroneously believes a rocket attack is under way?

My old friend Jonathan Allum of SMBC Nikko today drew my attention to the story of Stanislav Petrov who has died at the age of 77. On the 26th September 1983, he was the duty officer at a Soviet military facility that monitored the threat of missile attacks. The following is condensed from the BBC version of what happened that day.

In the early hours of the morning, Soviet early-warning systems detected an incoming missile strike from the United States. The protocol for the Soviet military would have been to retaliate with a nuclear attack of its own. But duty officer Stanislav Petrov decided not to report it to his superiors, and instead dismissed it as a false alarm.

“If I had sent my report up the chain of command, nobody would have said a word against it… The siren howled. All I had to do was to reach for the phone; but I couldn’t move. I felt like I was sitting on a hot frying pan…Twenty-three minutes later I realised that nothing had happened. If there had been a real strike, then I would already know about it. It was such a relief”

A salutary tale. Let’s hope the world stays this fortunate. But these really don’t seem to be risks we can hedge.