For most of 2016, the Morphic Global Opportunities Fund has been steadily re-building its exposure to India.

The market proved a happy hunting ground for us in early 2014, when we predicted that the election of current prime minister Narendra Modi would sharply change perceptions of the country. The enthusiasm was based on Modi’s track record as a long serving chief minister of India’s fastest growing, business friendly and relatively corruption-free state, Gujarat.

This proved true, but after about six months of gains, especially in the infrastructure finance-related stocks we liked, a wave of disillusion swept in, as the realisation dawned that India’s problems of slowing growth, and a lingering bad debt problem were deeper than feared. In addition, Modi had to deal with the challenge of not controlling India’s upper house, the Rajya Sabha. This meant that pushing through any reforms that required legislation needed lengthy negotiation.

Slowly however the economy is turning around and the bank credit cycle is recovering. In addition Modi has finally gotten a number of key reforms through parliament, including India’s first national GST legislation, which should not only improve the country’s budget position, but also dramatically increase interstate commerce.

Our investment credo at Morphic is that “change creates opportunity”. Generally we also try to differentiate between ‘real’ change and ‘hype’. However telling the two apart at any given time is never straightforward, so we also use “stop losses” on all our positions so that if a change we identify does prove to be ‘hype’ we don’t give up too much of our profits, because we always cut our positions when momentum unwinds beyond a certain level.

Such was our experience in India, and by mid-2015 we had eliminated our exposure to the country completely. We now believe we are in the ‘real’ change phase – and we have moved almost 10% of our capital into Indian stocks. We expect to have a large overweight to the continent for some time.

Our working hypothesis is that if India’s sharp rally of 2014 was equivalent to Nasdaq’s dotcom bubble of 1999-2000, we are now in a phase equivalent to the mid-2000s onwards. This was when it became clear that the internet really was going to change the world, but obviously not through buying pets on line as suggested by dotcom bubble peak float Pets.com!

Chart – Not all change is made equal – Hype vs Real Change 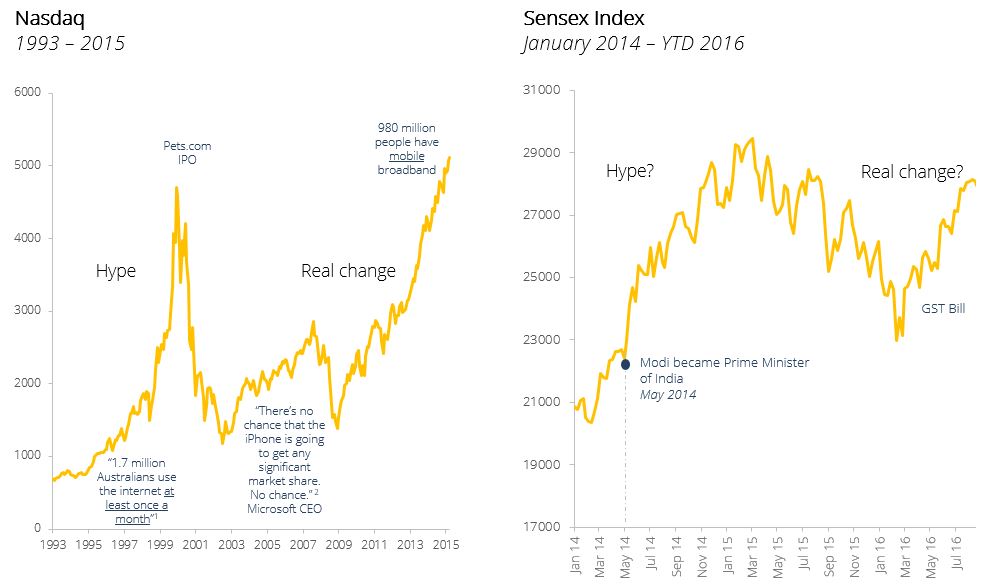 In a country as “exciting” as India, we rarely feel it is necessary to also look for excessively “exciting” stocks!

As a result, the Morphic investments in India tend to be in fairly boring sectors. At present, our major focus is on infrastructure related plays. These include the world’s largest electricity operator (Power Grid Corp); Bombay’s domestic and automotive natural gas retailer (Mahanagar Gas); the country’s largest road builder and toll road operator (IRB Infrastructure), and a specialist lender to power infrastructure (Rural Electrification Corporation).

Incredibly, the weighted average forward price earnings ratio of these four holdings is around 11x, but the weighted average long-term growth should be 15-20%, in our view. These companies also trade on very reasonable valuations of book, given their high returns on equity. The low valuations – and the predictable nature of these businesses give us a margin of safety.
The longer term changes we believe we can see from here include:

This will take it from being a stodgy asset heavy vehicle to an asset light(er) developer, operator and incubator of toll roads. As the revenues on the roads it builds stabilise, IRB will then be able to sell them off for a profit into the trust it will manage, allowing it to recirculate its capital faster, giving it more growth, less debt and a higher return on assets.

If this transformational plan sounds a bit like the so-called ‘Macquarie model’ that is because it is! IRB will go from a company with two business drivers: road building and toll road operator, to also having profit streams from gains on sale of its mature roads, and a (small) management fee for managing the assets after they are sold.

From what we can see, the plans for an initial transfer of a suite of six seasoned toll road assets to the proposed trust will create a gain on sale of about 40% over their current carrying value of IRB’s balance sheet, and boost its overall book value per share by about 30%.

However that should only be the beginning. Rationally, most investors will then look at the remaining roads on IRB’s books and revalue these to partly anticipate future gains on sale. More longsighted investors will also note the implications for IRB’s capacity to bid on more of the huge number of roads India needs to modernise, and its competitive advantage against other toll road companies from its new, lower, cost of capital.

So how much of this is in the price? Indian investors are quick to understand these kind of value drivers, but also tend to wait for factual confirmation before buying heavily. We saw this clearly in the 2014 election, when only after the vote was in, did the market really take off, even though polls and betting markets, had regarded it as a pretty certain outcome for at least a month beforehand.

In this case, the novelty of the concept has Indian investors questioning how much demand there will be for the trust, which involves raising as much as US$850m. Since the company started presentations to float the trust, IRB’s shares are up about 10%. However, so far the global roadshow has been confined to the Asia Pacific region. Next stop is the US and Canada, where investors are more attuned to this kind of financial alchemy, and a float yield of somewhere around 9% should look pretty attractive in this yield starved world.

We need hardly add that if IRB succeeds in this venture, there will be many that will take a similar road (pun intended). We hope we are well positioned in some of these as well. But that will be the subject of another blog for the future.