DIDN’T YOU JUST WRITE ABOUT THIS?

Yes, that’s true, we wrote about the stock in June. The link is here and covers off on a lot of the background material. To be honest, we truly did not expect to write about the stock again this year. We wrote then that we thought a large part of the move for the next 6-12 months was done and that the stock would trade sideways in the same manner Tesco’s did. How wrong we were! The downgrade to the 2016 earnings forecasts of circa 25% shocked the market, sending the stock down 8% on the day. But more worryingly, it shocked us.

WHY WOULD SHOCKING YOU BE MORE WORRYING?

It’s worrying because we weren’t bullish to start with. If one is optimistic about the outlook, a miss like this is bad enough. But if you are already pessimistic like us, it takes a lot more to be shocked. It’s concerning at a number of levels:

We do this because the human brain struggles to adapt to new changes in the outlook and whilst Tesco had its own unique problems, we’d use a variation of the Anna Karenina principle as used by Peter Thiel: “All happy companies are different, all unhappy companies are alike (in that they failed to escape “sameness” or competition)”

So you can see that after the initial downgrade, whilst there was some downwards drift, it wasn’t until 2 years after the first earning miss that the company (and analysts) really started to get their heads around the magnitude of the problem, and that magnitude to came to EBIT being 70% lower than first expected.

What is shocking is that Woolworths has gone from the first downgrade to these ones so swiftly, far more than we expected even, to now having done 50% of Tesco’s move in less than a year. 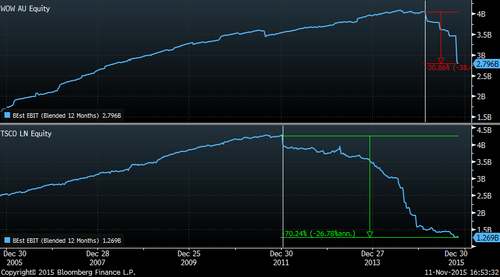 A bullish response may say that this is good that Woolworths has responded swiftly to the issues and addressed the problems, thus ensuring that a Tesco style debacle doesn’t ensure. Indeed this could be the case. It would be odd if this was the case – to go from recognizing the problem to solving it in 12 months in a multi-billion dollar organisation would truly deserve plaudits.

We have another take on it. One we thought may play out in the future but seems to be happening now: the business is full of ‘hidden leverage’.

WHAT IS ‘HIDDEN LEVERAGE’?

Unfortunately for readers, we have to move into some accounting related technical material, but please bear with us, as it is important. Someone who covers markets said “I never read annual reports from front to back, as that’s the order that the company wants you to. I always read them from back to front, as that’s the order in which things are hidden.”

When running a business, an owner has a choice whether to own or lease an asset. The easiest one to think of are airlines and planes. You could run an airline with 100% of aircraft leased (believe it or not, but there are many companies out there who will lease you a fleet of jumbo jets!) or you could own them all. When Virgin Australia first launched they leased nearly all their aircraft for example. It may seem that leasing is better, after all you don’t have to stump up over a $100m for a plane, but there are no free lunches here: it is a tradeoff between flexibility (which comes with owning) and capital costs (which are avoided via leasing). Airlines know first-hand that flexibility is important when recessions hit or growth patterns change. As a result, most mature airlines tend to own a fair portion, but lease some.

OK, now what is interesting about Woolworths, is they have decided to sell and leaseback nearly everything. Note 27 of 2015 annual report outlines what their total lease commitments are, i.e: this is the total amount they are locked into paying in the future. No, that’s not a typo: they are committed to paying $22.9bn worth of leases and CAPEX, with most of this for more than 5 years! 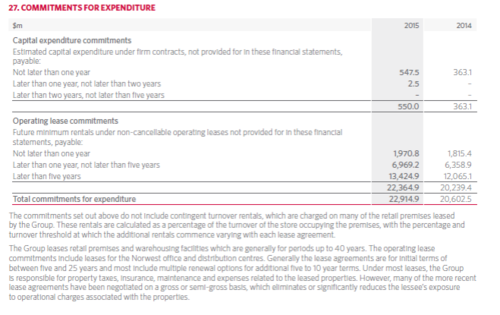 And they are committed to spending just on $2bn a year on leases (Figure 2). To give some perspective here, the company pays only $250m in interest a year on its debt. The operating lease liability bill is 8x the size of the debt servicing line. We used Virgin as an example earlier – they had in 2015 $370m of total operating lease expenses and $160m of cash interest expense (I’ll ignore the capitalised interest here), so it was 2x and this for an airline who often use them!

BUT TELL ME WHY IS THIS RELEVANT TO MY INVESTMENT?

Just to be clear – there is nothing intrinsically right or wrong with using operating leases, that is not what we are alleging. It’s just they have different risk profile to owning an asset. They work best if you have a high degree of certainty on your business; if you are capital constrained; if you believe that the lessor has a lower cost of capital than you; or if it’s not part of your core business.

Woolworths clearly believed that operating a “capital light” business model was the best idea for shareholders: it freed up cash flow to grow the business and enabled management to return cash to shareholders. Given the food business is not as unstable as the airline business, they wouldn’t need to change their mind and sell stores or re-align their business any time soon.

Obviously a price war, falling market share and an aggressive new low-cost entrant (Aldi) wasn’t in the base case. Or any case for that matter.

It matters for those who are long the stock, because if this round of price investment, mooted at $500m, isn’t enough, further competition and price falls or loss of market share will see EBIT eroded very very swiftly.  And we think this is why the downgrade was so large and so soon. This business has huge hidden leverage, as the “debt” sits off balance sheet.

Normally people look at Debt/EBITDA ratios, or those that involve debt, but as we have shown, this isn’t relevant for Woolworths. What is relevant is what is called “Fixed Charge Cover Ratio” as used by Debt rating houses. Woolworth’s management have set a number of more than 3x. On broker numbers, this is now down to 2.5x 2016 forecasts. Without knowing what the debt covenants have in them exactly it is likely to be 1.7-1.9x. Once these numbers are looking like being breached the debtors will ask for a capital raising to assure them.

The point we are trying to raise: this business has a lot less room and ability to perform dramatic maneuvers to re-position itself – hypothetically such as saying shutting down stores where price competition is now not worth staying –  than it looks on the surface.

Whilst forecasting the future is fraught with risk, as investors we are compelled to attempt to understand the future path of events. We now currently see a base case evolving of:

You will note we refer to Masters above. We think Masters is a sideshow. Cutting losses and freeing up cash may help, but it’s worth maybe 10% to the share price on our numbers. Big W, likewise, do they really want to sell the asset at the bottom of the cycle now? It would more likely come across as desperation rather than strategy.

And what does our alternative scenario look like (all investors should keep the counter-factual in mind at all times)?

So there we go. We will no doubt be re-visiting this stock in the next few years in this blog. For those who are long for the dividend stream: you have been warned.