The race that stops a nation and European interest rates

THE RACE THAT STOPS A NATION AND EUROPEAN INTEREST RATES

What horse race are you guys watching?

The first Tuesday in November can only mean one thing for those who are inclined to betting on uncertain outcomes that involve people and data but don’t like horses: a ‘live’ Reserve Bank of Australia (RBA) meeting! Yes, yes, we are rather boring folks who find this stuff interesting, and this blog will attempt to both humour you and torture the horsing analogy, hopefully getting in ahead of the newspapers who will do it early next week – though as always keep an eye out for Terry McCrann and his column. For those unacquainted with him, Terry is to RBA betting what Fine Cotton was to horse racing: a dead set certainty.

But the release of the ABS inflation data this morning has thrown a cat amongst the pigeons and seen the odds come in dramatically to 50/50 this afternoon after a late plunge. Inflation missed market expectations substantially coming in at 2.1% YoY vs the 2.4% expected by the market. This miss makes it likely that the year-end RBA target they believe the economy will be running at is going to be missed.

So what does this mean for the economy and interest rates?

Whilst this inflation data isn’t definitive for next week it has made one prediction easier (if making predictions can be said to be easy): If we step back the easier question to answer is ‘will there be another cut?’ The market has come to this conclusion as well: the chart below is the yield on interest rate futures compared to last week. The biggest change has been on the November to February space, where they have move to pricing now more than a 100% chance of a cut by February and we agree with the market because: 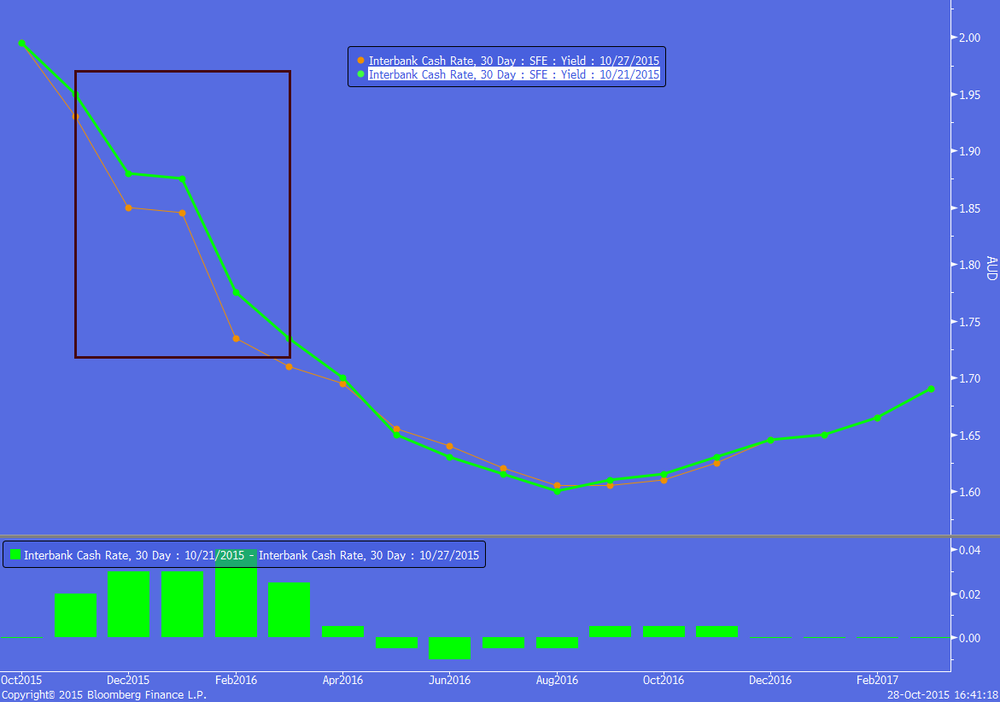 OK, so since Tuesday is the national day of betting, what is Morphic’s bet?

Betting on month to month RBA calls is notoriously difficult and we think we have better odds on the horses this time as it will largely come down to the Governor and what he decides this weekend! However, we will go for a No cut but would expect it to come sooner or later. And always go with the smart money – follow the McCrann dollar if there is a late plunge.

And lastly, you said something interesting is happening in Europe (apart from the Wallabies)?

Mr. Draghi at the ECB seems to have felt the limelight had drifted away from Europe and the ECB and decided to shake things up. Last week was expected to be a non-event at the ECB press conference, but Draghi, however, all but pre-announced some more easing most likely to come in December. An interesting twist was he went out of his way to back down on the idea that they are at the lower bound with the deposit rate at -0.2%! He has clearly been looking at their neighbours in Switzerland who are sat at -0.75% and decided that the ECB is looking tame. The Chart below is the 1-year yield on Swiss rates…and no that’s not a typo…people are lining up to lend money where there is a guarantee of ‘default’, in the sense they don’t get their principal back!

It is a ‘through the looking glass’ world we live in where people are happy to lend money and be certain they are not going to get it back, thus making a mockery of the so-called zero bound – but get ready for hearing about even more negative rates in Europe in the coming months.