Populism arrives to the emoji generation, and they like it - Morphic Asset Management

Populism arrives to the emoji generation, and they like it

Populism arrives to the emoji generation, and they like it

Finally. One of the odd things after the Global Financial Crisis (GFC) is that the left of politics never seemed to be able to find a voice. I had (incorrectly) thought that if the narrative was that globalisation and lower taxes were seen as the cause of the GFC, then this would be fertile ground for the left.

Instead, remarkably, we returned to more of the same laisse faire economics in the years after 2008 and it was the right wing populists who emerged first to grab power with Trump as their cheerleader in 2016.

Which brings me to the UK elections held just over a week ago. The result has been a disaster for the Tory party (the UK equivalent of the Liberals here), who ran under a dour leader in Mrs. May, on a platform of more austerity, a “hard” Brexit and anti-immigration. The idea was it would sweep them to power capturing the disaffected working class voters and consigning the UK labour party and their Marxist dinosaur leader, the apparently unelectable Jeremy Corbyn, to decades in opposition.

Instead they lost their majority and went backwards. Oops.

FIGURES 1 & 2 – AGE, NOT CLASS NOW DETERMINES WHO YOU VOTE FOR IN THE UK 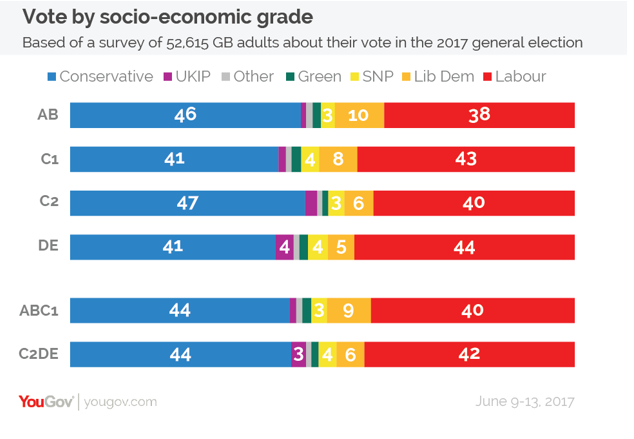 The Tory’s did take a high share of votes and won a few new working class seats, but they lost more urban liberal seats to labor, leading to a hung parliament. And they lost because the youth vote turned out at a level that has not been seen in many years. Exit surveys suggest turnout rose from approximately 43% to over 59% (Figure 3) for the under 24 category.

The snowflake generation it turns out does have a “pain point” and watching the boomers and pensioners take them out of the EU would appear to have jolted them into action. 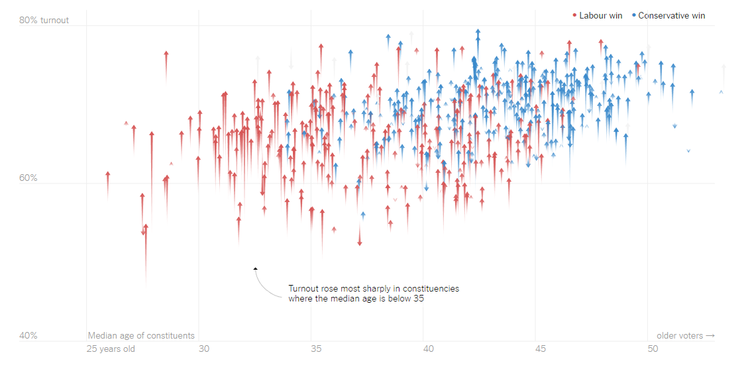 The years after the GFC have been a “war on the young” globally. Monetary policy with low to negative interest rates is meant to stimulate the economy through cheaper loans. One outcome of lower interest rates is to increase the value of long duration assets and housing is a long duration asset. This phenomena is global, and so London and Sydney have seen the same effect – booming house prices. With homes generally being tax free, there has been an entrenching of wealth/class like never before.

On the other side fiscal policies have hurt the young as well. University fees have soared in the UK, whilst austerity has seen the removal of a lot of family assistance. On the other hand pensions have been protected. Governments have been able to do this because older people vote, the young don’t, or if they did there wasn’t enough to justify policies to win those votes.

That is up until now. Corbyn’s policies were ludicrous in so many respects (he is a fan of Venezuela), but as a columnist in the Sunday Times said, “these votes were a cry for help”.

If we look at Australia, whilst not identical, there are some similarities: soaring house prices, higher university fees, yet no higher taxes on capital (superannuation is basically tax free as is housing). The coalition here tried to kill off Labor’s changes to negative gearing and super as “against working Australians”. Yet with less and less people owning a house, the politics of whether that wins votes or not is changing.

What surprises me is that Labor in Australia still hasn’t figured out the difference between wealth and income (i.e. the really wealthy don’t work for a salary). The “millionaire’s tax cut” doesn’t play so well with younger professionals who can see themselves earning over $180k in their career. What they can’t see themselves doing is owning a $4mn house anytime.

Tax capital more heavily, put in an inheritance tax (nearly every economist likes the tax as it doesn’t create many distortions) and use the proceeds to fund Medicare and lower HECS or lower income taxes and Shorten could probably go a step further to winning what Corbyn failed at.

If we are to look at the rise of the left again and what may be the winners and losers, they are somewhat different to the populists of the right, though ultimately they share similar characteristics: bad for the readers of this blog.

Housing and the wealthy would be clear losers. If Trump is promising unfunded tax cuts, this type of populism promises a lot more “tax and spend”. Some of Corbyn’s policies included writing off student debt; funded by lowering the top tax rate on income to £80,000 ($136,000 AUD); and massive increases in spending on health.

Tax rates on corporates would go up (unlike Trump) along with higher minimum wages (shared with Trump). These are bad for earnings of corporates. It’s old style socialism and if the banks in Australia thought the levy was bad, they ain’t seen nothing yet. Wait until “directed lending comes”.

Because disaffection can turn to anger swiftly, and in the end it’s taken without compensation: the UK at one point in history acquired private houses compulsorily to build affordable housing. Losing capital gains relief and some inheritance tax would seem to me the better concession to make now.