Looking ahead: First Half 2015 Outlook

“For most of the post-war period, economic expansions did not die of old age. They were murdered by the Federal Reserve in the name of fighting inflation.”

Observant readers will have picked up that for the third Half Yearly Report in a row, we have used the same quotation for the start of this section.

This is not solely because we lack imagination. It’s because last year at many stages, particularly in February and October, we were questioned as to why we were still bullish and indeed at often questioned our own views on this matter.

As we start 2015, the landscape is starting to change. Barring a large external shock, the US Federal Reserve will almost certainly raise interest rates this year. Market pricing currently suggests the first hike will occur in September, though we remain of the view that it is more likely to occur in June (1). 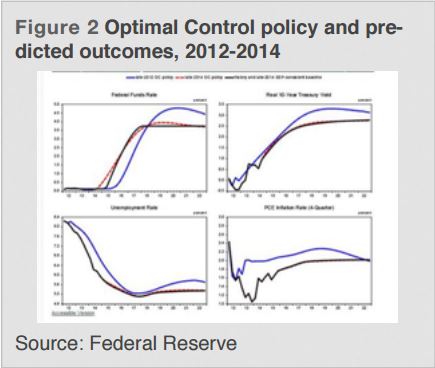 The worry to us is that the Bond market remains stubbornly of the view rate rises will be slow and measured (as per Fed Funds Target chart above) and is forecasting rates well below the Federal Reserve’s now infamous “dot plot”. 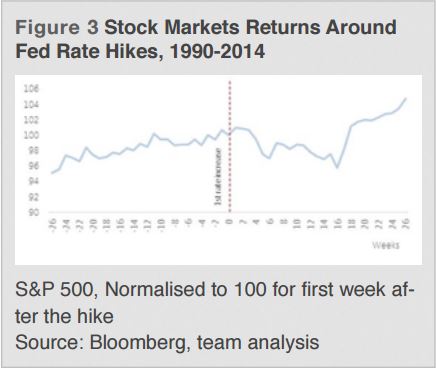 This introduces the risk of a surprise in rates markets. We think the Federal Reserve is committed to its path and it will take a large shock to derail it. Bond bulls point to the deflationary shock coming from lower oil prices along with increased global risks, but Yellen’s speeches consistently show she is more focused on spare capacity in the US system and the effect this will have on wages, than the transitory impacts of cheaper oil, or developments elsewhere in the world.

Historically equity markets have struggled to push higher at the start of rate rise cycle (see chart below.) Our view is that if the money market gets a shock from rates rising faster and quicker than it expects the impacts could be even nastier on equity markets, which don’t generally look at this kind of issue all day.

So if “good” news is indeed “bad news” and we expect plenty of good economic data from the US in early 2015, are we in fact bearish? The answer is not yet. As can also be seen in the chart above, after a period of uncertainty that lasts six to nine months after the first rate move, the market has resumed an upwards trend. Historically, this is because EPS growth post the rate hikes beginning has more than offset the contractionary effects on P/E multiples after the rate cycle began.

The unanswered question is just how many rate hikes are needed in this cycle? Here we agree with the bond market – rates are likely to peak out lower and affect the US and the rest of the world from a lower level. The other characteristic is that this cycle is likely to see the US as the only G7 economy in a hiking cycle, putting upward pressure on the US Dollars and continuing to put pressure on markets and economies which have funded their debt in the currency.

Lastly on rates, there is also another (rather technical, but potentially important) point: this is the first cycle of rate increases post one of the Fed’s Quantitative Easing (money printing) exercises. Indeed, no Central Bank has ever embarked on a rate increase cycle after conducting QE. The issue is highly technical (6) but conducting monetary policy in “a world awash with liquidity” (7) so that your target rate actually moves, is a non-trivial issue and requires different tools that may introduce new risks.

Offsetting these issues, there are pockets in the world where liquidity is ample and where rates are not rising – most notably China and India. Both will soon be in rate cut cycles and are beneficiaries from lower energy costs. India as a capital importer is somewhat at risk from faster and higher rate increases, but China with its closed capital account is more immune to this. Both are markets where we believe there are opportunities from the long side on stocks and the Fund is already overweight.

Overall our stance is probably more cautious than at any time since we launched the Fund. In 2015 we aim to extract more value from an expanded gross book including more outright shorts and pairs trades, designed to profit from picking better returning stocks without taking on pure market risk.

But we are also cognizant of the peril of getting too bearish too early: this may make market pundits sound “wise” but often costs investors, for whom they work, a great deal of money.

And of course for potential bears who are truly superstitious or believers in cycles, we should point out that this the 3rd year of the presidential cycle and has a 5 in it! (8)

(1) Based on commentary and the December 2014 meeting minutes

(4) Mentioned in the last half yearly

(6) Readers can read find more information about it here and may also wish to look here for a very wonky piece.

(7) We have our own view that there may not be as much liquidity out there particularly in US Dollars and high quality collateral, as some think.

(8) One of the oddities of US market performance is that the 3rd year of Presidential cycles has resulted in an uncannily high hit rate of good years. More can be read on this historic pattern here. 2015 of course is also a year that ends in a “5”. For what it’s worth, going back to 1905, the stock market (as measured by the Dow until 1925, and then the S&P 500 thereafter) has never been down in a year ending in “5”; with the average return a whopping 32% (and only two years without double-digit returns).