Why was the market fall of February so different to January? - Morphic Asset Management

Why was the market fall of February so different to January?

WHY WAS THE MARKET FALL OF FEBRUARY SO DIFFERENT TO JANUARY?

Equity markets fell heavily over January and most of February. But what was happening under the surface was in many respects more interesting.

A BIT OF RADIO SILENCE FROM TEAM MORPHIC?

Apologies for the lack of a blog, but in case anyone missed it, late January and early February were just a little hectic in markets. Being a small team the burden of blogging falls on one member, in particular, more often than not.

The second reason being that member was then away at a wedding in Tasmania. If you haven’t been, I’d encourage you to visit this part of Australia, with the particular incentive of a low Australian dollar. I’ll do a blog about the other part of the trip that surprised – the number of tourists, particularly Chinese… I found myself asking how did they even know that St Helens on the East Coast of Tasmania existed? Most Australians don’t!

Maybe, just maybe, Australia could engineer a soft landing after its terms of trade boom. Unlikely still our mind here, but something worth considering.

THAT’S GREAT – BUT WHAT ABOUT THESE MARKETS?

One would have to have been very disconnected from markets to not have seen the worst start of the year for many many years in global markets. Various reasons have been ascribed to it ranging from Chinese slowdown (this would seem to be the default fallback position globally if a reporter is unsure why something is happening); a looming US recession from the Federal Reserve’s “policy error”; falling oil prices and rising default risks from oil-producing countries and companies; and then more recently in February negative rates affecting banks’ ability to lend and in particularly some European banks having their balance sheet questioned.

Like most things in life, it’s probably a bit of all of them put together, but today I think it’s worth focusing on what unfolded in the January fall and how it was substantially different to the falls experienced in February.

SO WHAT HAPPENED IN JANUARY?

Readers would be familiar with our view held at the start of the year that 2016 would be at best a choppy year, as markets have tended to not do well into rate increases, irrespective of how many there are in the cycle. Morphic did not, however, subscribe to the view that it was enough for a full-blown bear market this year as a base case.

What took place in January we would describe as “we’re going to have a global recession!” price action in markets. Now whether this is true or not (markets after all have predicted 8 of the last 5 recessions), we won’t know for many months yet, but the price action was consistent and “made sense” because what do you do if you think global GDP is going to slow (be it US led or Chinese)?

So far, so good really. There are a few other charts, but I think readers get the picture here. A few things stand out when looking through these. Firstly, January was more a continuation and acceleration of a trend that was in place, particularly at the sub-sector level such as Industrials ETF and the Small Cap index. We at Morphic were aware of these trends, as they are consistent with the narrowing at the end of the bull market that we discussed in our half yearly report, but were more of the opinion that for the broad index to fall substantially the leaders would need to give up their gains.

Secondly, the last two charts of the US dollar and oil/commodities and their changes in the middle of the month give a hint of what was about to take place in February…

SO WHAT IS DIFFERENT ABOUT FEBRUARY THEN – DIDN’T MARKETS JUST KEEP FALLING FOR MOST OF THE MONTH?

Whilst stories of recession and growth fears still swirled around this month, the new narrative focused on European banks, with a particular focus on “CoCos” or Contingent Convertible bonds (a good overview of them can be found here) falling and fears about Deutsche Bank.

But a funny thing happened on the way to pricing a recession…a lot of stocks and sectors that were “working” stopped working.

US Industrials ETF squeezed a lot higher, outperforming the broader index by 3% this month:

The previously high flying Growth Index – which has tended to do well when interest rates fall as markets price lower GDP hurting cyclicals – has underperformed the Value index (SGX vs SVX) by 1.5% this month.

And importantly, the US Dollar has come to realisation that the long US story on the back of rate increases is not compatible with pricing no more rate increases, with the DXY Dollar index falling nearly 5% in February.

WELL, THAT WASN’T WHAT I THOUGHT WOULD HAVE HAPPENED… 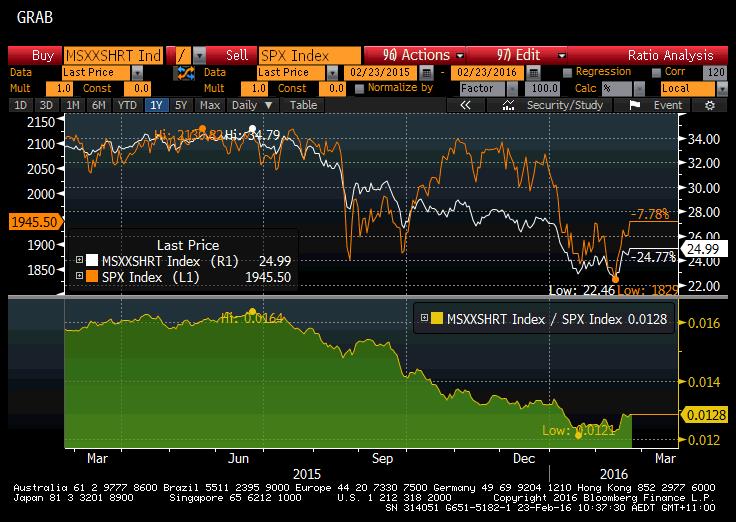 “Momentum” is what stocks have the best upwards price momentum and currently has a lot of these previous winners in the long part…it has unwound  all  of January’s gains.

Below is a chart of the Hedge Fund Index of Market Neutral Funds. These funds have no net market exposure and one can see they did well in January to largely reverse a lot of this performance in February.

So this is all consistent with what we have heard anecdotally over the last few weeks: hedge fund managers have been forced to reduce overall sizing of their long/short book (called the Gross exposure).

Indeed there are rumors that one of the best of the best in the Hedge Fund Long short space, Citadel, has underperformed by 6.5% already this year leading to job cuts and we would expect the shutting down of positions (the hedge fund community in the US is ruthless with losses..) http://www.cnbc.com/2016/02/18/citadel-cuts-employees-after-losses-report.html

Not that we at Morphic are gloating in any way: one of our largest positions in the Fund is the long “Quality US Banks”. These stocks tend to be have more growth to them and as such have been caught up in this reversal as well, thus dragging on our performance, along with some of our winners from January giving back some performance.

The last word in this section should go to the Morgan Stanley strategists (Adam Parker) who got us thinking about it:

Are we on a cube-shaped planet? Should “Us do opposite of all Earthly things?” Everything seems backwards. Sell winners, buy losers, own staples in both up and down markets. Just do the opposite of what makes sense. Bizzaro World.

Martin Marietta reported last week, and they and a couple of other materials companies have blamed their poor quarters on the rain. Even Milli Vanilli’s success with this line turned out to be fake. The rain? Oh, the stock went up a lot that day. Bizarro World. The credit card companies are discounting a consumer recession. The banks are discounting an industrials recession. But, Visa said volumes were good in January, and jobs, housing, delinquencies, confidence, and other metrics appear to belie the market price action. Bizarro World. Companies with good results are being hammered. Companies with bad results have stopped going down, with freight, WMT, and other prior losers outperforming. Bizarro World.

Our portfolio advice has been pretty horrendous lately. As my 90-year old Latin teacher used to tell the class in 1985, “son, you are in left field, without a glove, with the sun in your eyes”.

….As an investor recently said to us at a conference, “I am doing a lot of things, just nothing with confidence”. Doing the opposite of what we recommended would have been better. Bizarro World. Or at least hopefully not the real world.

SO WHERE TO THEN?

The easy answer is that this is just another bear market rally that has taken place for these stocks and it is a good opportunity to short more, or if you are long, sell out at a good price.

The course of action there is fairly self-explanatory.

The more complex and nuanced idea is to contemplate ‘what if these price signals are something bigger?’ I remember being very dismissive in 2009 of talk that markets like China had stopped going down. It often pays to focus more on the “Things that shouldn’t be there” rather than the things that should be.

I must admit, I struggle to have a strong upside bull case, given where we are in the rates cycle and what’s happening in credit markets; and earnings revisions globally being very poor, all of which suggest a sideways to down market, but if I was to try and look forward to a “imagine a world where markets are higher rather than lower in 3 months”, I’d say there are some things that would need to happen in the real world:

We will be watching to see if any of these signals eventuate. If they don’t then the reversals we have seen this month will fade swiftly in the coming weeks and markets will look to return to their downwards trend..