Having spent the last few blogs looking at everything from risk management through to the performance of different styles and then looking into market risks in January and February, I thought it would be quite fitting for the Anzac day weekend to return to stocks this week and focus on the gambling sector – namely Macau gambling.

SO WHAT IS INTERESTING AT THE MOMENT?

Readers of the blogs from last month and earlier may remember that we have been interested in the idea that emerging markets may be ending their 5 years of underperformance (Figure 1) that have seen them decline by 50% relative to MSCI World (which represents developed markets only). 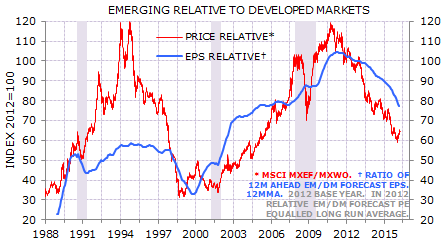 Part of this underperformance is the currency effect of a stronger US Dollar (the above chart is done in constant USD terms), with the other part being the poorer relative earnings performance from emerging markets over the last 5 years which has seen earnings consistently revised down.

We are however somewhat cautious still at this stage. Readers will be able to see from the chart above that the “false dawns” of emerging market recoveries have seen rallies of at least this size occur in 2012 and 2014, only to fizzle out and resume the downwards trend.

What may be different this time is that a lot of the bad news is in the price, with relative earnings forecasts now converging: the chart below shows the gap between Return on Assets in Emerging markets versus developed markets (Figure 2, courtesy of our Executive Director, Gerard Minack). 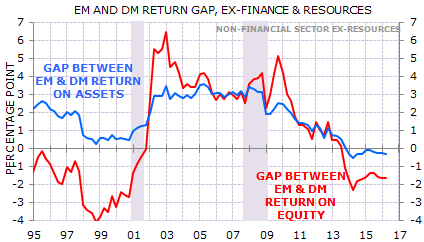 The blue line in Figure 2 shows how, post the Asian crisis investors earnt premium returns at discount prices, which was an explosive mix for equity investors. As capital flooded and valuations rose, capitalism worked its magic, with returns falling, yet with high valuations. Figure 3 also shows these markets are now priced to reflect lower returns. 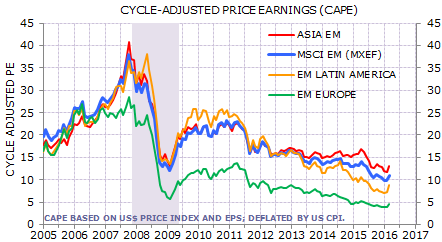 Now as Gerard points out, it still needs emerging markets to have earnings stabilize from here and if the dollar starts rallying again and commodities fall, it could prove to be another false dawn, but with the region under-owned globally after five years, it is an interesting place to start looking.

SO WHERE DOES MACAU FIT INTO THIS?

At Morphic, we like stories where the macro backdrop aligns with our bottom stock ideas. This does not have to always be the case, but generally, it is better to “run with the wind at your back, rather than into it”. Morphic had been invested in Macau gaming stocks through the strong run-up in 2013. Despite some aborted re-entry attempts (where risk rules pulled us out), we have largely been on the sidelines through the corruption crackdown and resultant earnings falls of 2014 and 2015.

So we think that the emerging market story is supportive, but what is really interesting in Macau gaming stocks is that things are not only getting less bad (a slowing rate of fall), they have stopped falling and at the margin have turned positive for analyst expectations.

WHY ARE YOU LOOKING AT THIS ‘QUANT’ STUFF?

As a principle, Morphic prefers to buy stock with positive momentum in both earnings and price, with a supportive valuation backdrop. If you just have positive price momentum, valuation multiples will expand swiftly (if price is rising but earnings are not, the P/E will rise) until a point where the market either sees earnings upgraded, or not – and you get what looks like the “false dawns” that you see on the charts. On the other hand, if you have valuation but not price support you are at risk of a “falling knife” where the valuation part turns out to be the “false dawn”

Let’s return to Macau and focus on the stock that we like currently, Sands China, and walk through the last few years on this stock on the chart below (Figure 4 – I do apologise: it’s a bit of a spaghetti and meatballs chart as there is a lot going on in here, but bear with me). 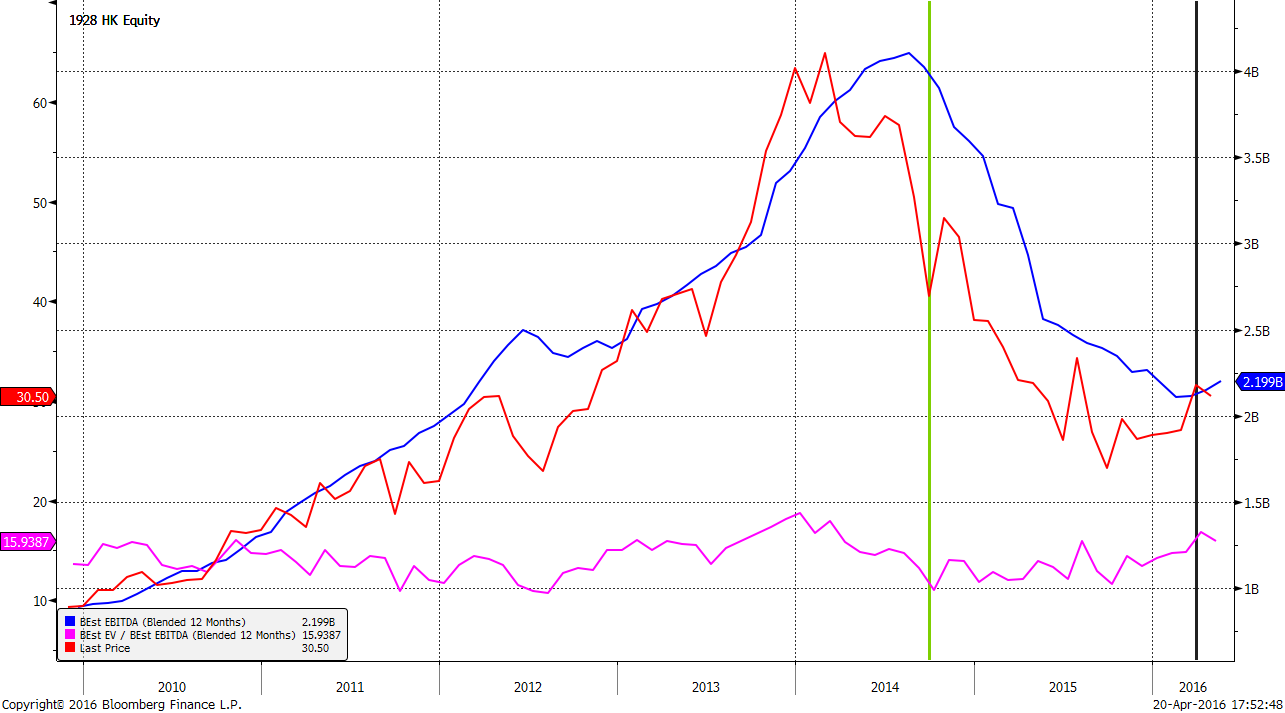 The blue line is the rolling forward EBITDA forecasts; the red line is the share price; and the pink line is the EV/EBITDA multiple for the stock (this sector tends to trade off this multiple rather than P/E).

Firstly, what it shows is that over the medium term, earnings drive the stock price. Whilst the two may diverge at times (which is represented via the expansion or compression in the multiple), the divergences are temporary. Simple, just get earnings forecasts right…

The green line I have drawn shows the period after the EBITDA forecasts had just started to fall, by which point the stock was already down 33%, but it looked cheap on EV/EBITDA, but was a value trap. On the other hand, the fall in 2012 turned out to be a false sell signal…which is why investing is such an inexact science!

Now if we look at 2016 and the black line, the multiple has expanded ahead of earnings, as price has run up faster than earnings expectations, but with the blue line turning upwards for the first time since 2014 it is promising that this rally has more support than the other false rallies. The risk, of course, is that we are in the inverse position to 2012 – whereby this change in earnings is short lived and the stock falls swiftly back to where it was.

Which is why one turns to fundamental analysis at this point to try and ascertain just how sustainable an uplift in earnings may be.

HOTEL ROOMS AND GAMBLING FOR THE MASSES

For the sake of brevity for tiring readers, I won’t go into a deep dive on the background of the differing markets and issues the sector has faced (of VIP gamblers; junkets; visas; smoking bans; corruption and Mr James Packer) – there are plenty of broker notes interested readers can go to, and instead I’ll focus on:

1) The corruption crackdown: One can never know what portion of earnings from the VIP segments for each of the listed stocks was money of questionable provenance, though we do know the fall-off in earnings coincided with Xi Jinping’s clampdown. The good news is that the share of earnings from that area has shrunken dramatically. Below is the chart (Figure 5) of all the major players in Macau and looks at the changes since 2011. Sands always had a larger exposure to Mass market, but all players have increased from the 30—40% level to north of 70% on average. It all suggests that further weakness from the corruption clampdown is likely to be limited.

Sands China is the least exposed to VIP, with it representing less than 10% now and gaming overall down from 68% of profit to 61% in 12 months. But what is really interesting is the amount of revenue that is coming from mall and hotel segments

2) The hotel ramp-up: It’s no secret that casinos are highly cash generative, but in the case of Macau, the cash has been recycled into building out their resort called “Parisian”. This is largely finished and will come online later this year, adding 3,000 rooms to its existing 11,000 rooms. Further, its location at the heart of the Cotai strip cluster, should enhance its attractiveness to conventioneers and mass market further (the margin on hotel rooms is running at a 75-80% profit margin). 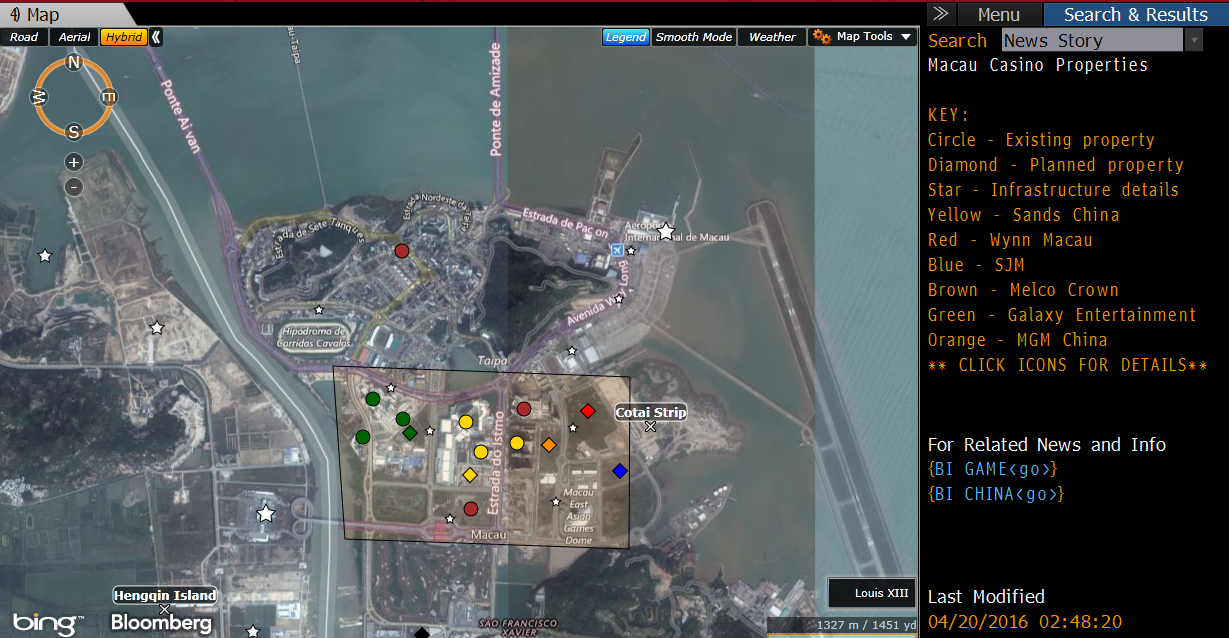 WHAT DOES IT MEAN FOR EARNINGS?

Bringing this together, if we look at the cashflow statement for Sands China, I’ve highlighted a few things that are relevant: 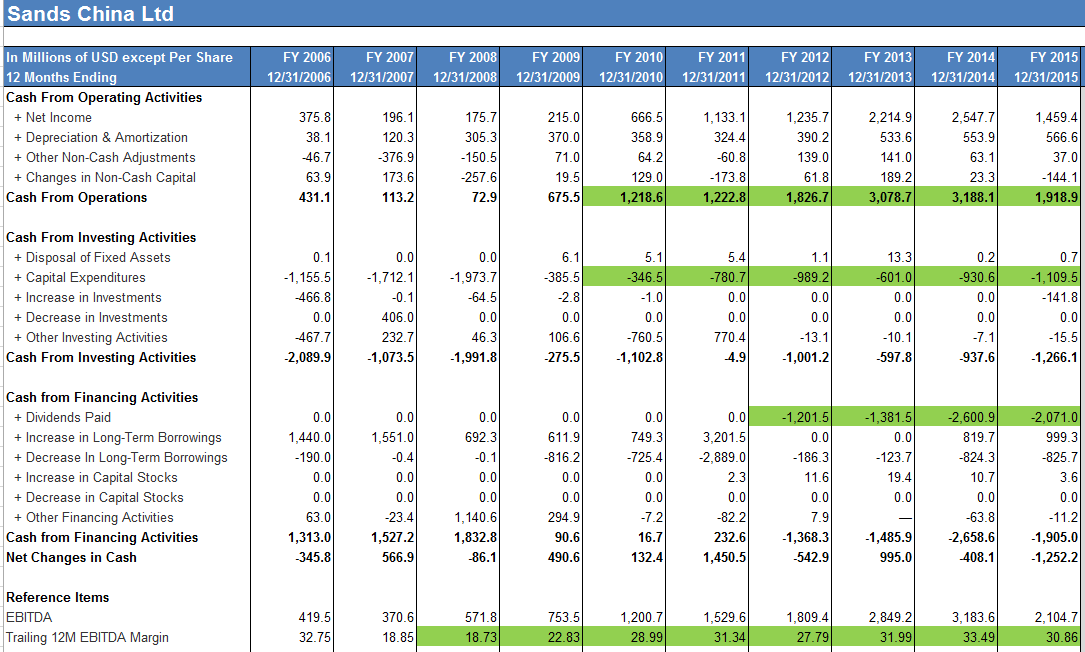 We see EBITDA as having the potential to move towards $3bn USD again as the hotel comes online and tables are filled. Given management has a propensity to pay this out, this equates to a running dividend yield on the stock at current prices of 10% if this was to occur.

WHAT COULD GO WRONG?

The first quarter results released by Las Vegas Sands (the parent company) shows why one should be cautious still here despite our more optimistic outlook. EBITDA slipped in the first quarter along with margins, though bad debts seem to account for a good chunk of the miss.

The biggest risk is that with all the major players now re-aligning to focus on the mass market and away from the VIP segment, the large number of hotels being launched sees the capacity struggle to be absorbed and that the players discount amongst themselves.

Medium term, this isn’t so much of a problem, it would more suggest that 2016 just isn’t the bottom and that this was a “false dawn”.

Emerging markets as a whole, are at an interesting point where things may be improving, or at the very least, getting less bad. Stocks such as Sands China, which we believe will benefit from improving profitability over the next 12-18 months as the bad news backdrop lessens, are the stocks which we believe offer a good risk/reward trade.

And for those looking for a bad risk/reward trade, but some fun nonetheless: good luck at two-up on Anzac day!