Looking back (and forward!)

LOOKING BACK (AND FORWARD!)

The biggest thing that happened this year from an Australian perspective was the substantial outperformance of overseas shares compared to local shares. 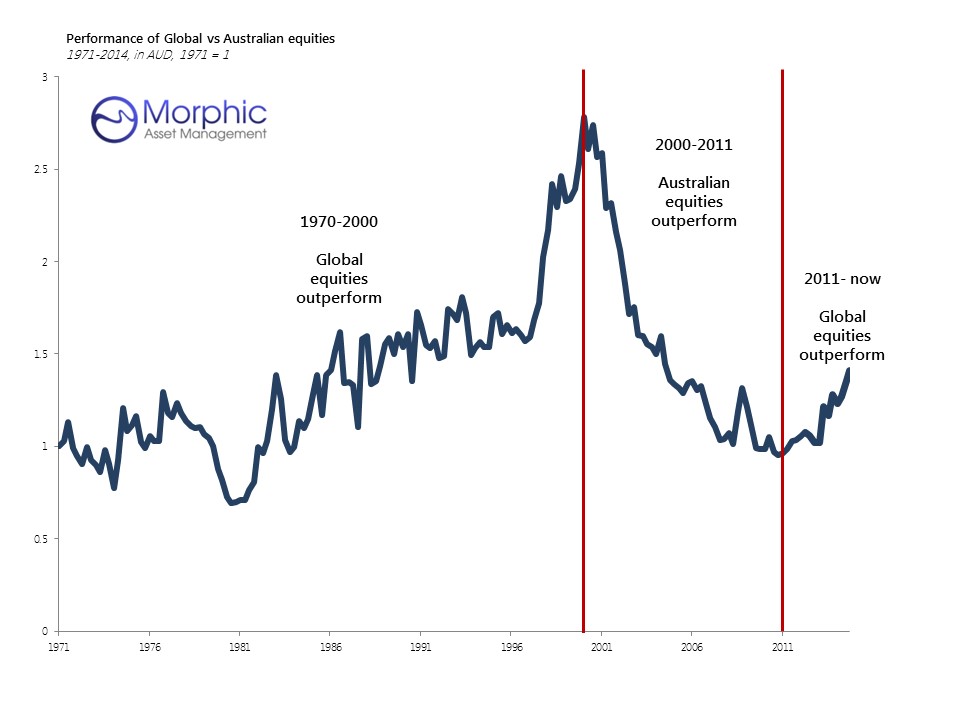 This seems to mark confirmation of the decisive break in the reversal of the 12 year period from 2000 to 2012 when Australian stocks out-performed massively following the collapse of the US dot-com bubble, and the start of Australia’s “China-boom”.

We feel we are now only two years in to what is likely to be decade long trade – and in fact the last major period in which Australia underperformed global markets on a trend basis lasted 30 years! Like then we expect this to be driven by a the combination of a relatively weak local market, and an absolutely weak Australian dollar. Like today this was partly associated with the decelerating capital intensive growth phase of a major trading partner, Japan, which lead to an over-build in Australia’s commodity export sector.

Since Australian investors, especially SMSF funds are still so massively underweight global equities, this is a very serious issue. What we find frightening is that when we visit financial planners, a surprisingly large number who are still to switch their clients to global equities. are “waiting” for the Australian dollar to get back to 85 US cents. Quite a few even among those who have switched their clients, are getting worried about mean reversion, and already talking about rebalancing back to Australian shares…

Our view is that the upwards momentum in the US economy will continue apace, and that the US dollar will continue to be among the world’s strongest. However although the US stock market might again be among the best performers, we do suspect that it might not do quite as well as the coincident economic data suggest it should be.

The 2015 year could also be the one when more people realise the folly of acronyms like BRICs as an investing concept, with even the idea of “Emerging Markets” as coherent asset to allocate to goes out of vogue. The truth is emerging markets economies are too varied for them to be usefully grouped, other than in the sense they are generally (though not all of them) poorer than so-called “Developed Markets”, and mostly have weaker shareholder protections.

In 2015 this is going to come home to roost. We expect two markets in particular to out-perform: India and China. What these have in common is that both are beneficiaries of what we expect to be a lower new-normal oil price, even if that new normal ends up being 10-20% above recent lows. The other thing they have in common is that they can both cut interest rates even as the US is raising them. Both can also ease credit conditions and improve commercial bank profitability by cutting requirements for their banks to hold as much of their balance sheet in government bonds, which means they will be able to lend more even if their deposit bases don’t grow too much.

By contrast, the resource dependent emerging markets, especially Brazil and Russia, but also large part of Asia and Latin America will struggle. They will not be able to cut interest rates without seeing their currencies weaken – perhaps precipitately. And their economies will struggle amidst a sharp drop in their terms of trade, which in this case will lead to second round problems for their stock markets, we feel.

The sharp bounce in the oil price on Friday, and the recovery in a number of ‘oil-related” sub-assets like, junk bonds and large-cap energy stocks, highlights how over-sold the market had become by the time West Texas   oil was threatening to drop towards US$50 a barrel a few days earlier.

The sustainability of the recovery now will depend on the extent to which the market believes production will tail-off from here. Based on the sharp drop in the number of rigs in operation already, we see oil bouncing back to the mid $70s by mid-year. That is probably the sweet spot for the price to settle. Below $70 a barrel, very few of the new US unconventional oil fields makes much money. At $75 quite a lot of it will be worthwhile, especially with the continuing spate of technological improvements we are seeing among the operators, which is cutting operating costs – and improving production recoveries.