THE BEGINNING OF THE END? LAST WEEK’S ROUT IN GLOBAL BOND MARKETS

After many previous ‘false bottoms’, is it possible we are finally seeing the point where global government bond yields can go no lower, and with this, the end to one of the longest, but least talked about bull markets in history? The table below shows peak yields in different countries, their lows and current yields. As you can see – over 30 years or longer government bonds yields have fallen from the handsome, when admittedly inflation was much higher, and government finances globally generally shakier, to the barely perceptible. The fall has even seen shorter-term bonds yields in Switzerland and Germany go negative, meaning investors were effectively paying these governments to hold their cash for them!

Translating this into returns to understand what this means for someone who would have invested in a bond fund (rather than the better known equities indices such as the ASX 200 or All Ordinaries), Bloomberg construct a Total return index that takes into account the coupon or interest paid as well as the appreciation in the price of the bond. For investors who bought and held these bonds, they have seen $100 turn into $723 from 1992 to now, down from $770 at the end of March, but impressive nonetheless! All done with much lower volatility than equities (What GFC on the chart?). In the long path towards zero there have been countless counter-sell-offs when bond yields briefly picked up again, only for the downward trend in yield to reassert itself.

So it is hardly surprising that money has flooded into the asset class, looking for some of the returns that others before them have experienced. Since the GFC, there has been an astonishing $1 trillion dollars invested in Bond funds, versus a mere $400bn in equities. People used to talk about the “cult of equities” whereby over 60 years from 1950 to 2007, it had become accepted that equities were the best way to accumulate wealth, particularly in America. Bill Gross, the former PIMCO Bond Fund Manager talks it from his perspective here. We’d point out that he was “talking his book” in the sense that as a bond manager he directly benefits from those flows into bonds. 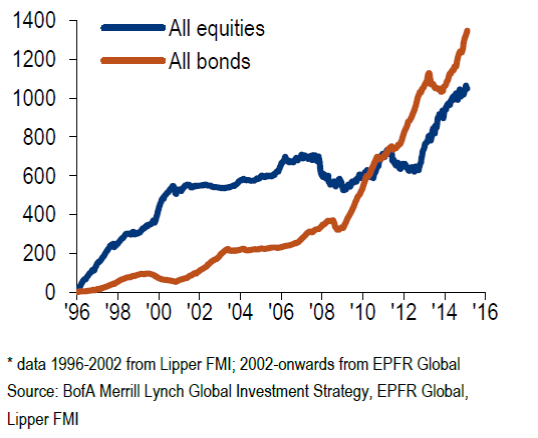 Indeed, among many traders and a popular in-joke among macro hedge fund managers was that you weren’t a real member of the club until you had lost money shorting Japanese government bonds, which until the recent plunge in German bonds had the record for the lowest sustained level of yield.

So what happened in the last week? It really began in Germany in their Bond markets (nicknamed Bunds). Some recent history here: Europe recently launched its own version of Quantitative Easing (the impacts of which were discussed in a prior blog), which was to involve their central bank, the ECB buying bonds. This was just another buyer on top of all the other private market buyers and a belief that deflation was going to set in (which we didn’t believe, as we blogged about here). This drove these bonds down to a record low of 0.07% yield for 10 years (and no that’s not a typo).

Then suddenly in the middle of last week, yields started to rise (meaning prices fall) and, well, they haven’t looked back since and reversed all the move since QE began in March. These moves then flowed into the US Bond market; the UK; and Australia.

The case varies from country to country, but here is a rough set of reasons, and where they apply:

What does this mean for equities?

We remain of the view that the very low level of the rise in bond yields for at least the next few years is unlikely to in itself demolish the case for equities. In most developed countries, equity yields are likely to be higher than yields on government bonds, substantially so in Japan and Germany for example. But what we are expecting is some very big rotations in sectors and maybe countries.

At the sector level, we are seeing under-performance, which we expect to be maintained in the frothier end of biotech and more out there internet stocks with sky high valuations and unproven business models like Twitter.

Taking over the leadership, especially in the US are banks, which benefit from a steepening yield curve brought on by bond yields rising faster than short-term yields will go this year even if the US Federal Reserve raises rates in September, as we and about half the market still believes. European banks on the other hand are being pummelled because they hold so many bonds on their balance sheets, which are falling in value. This brings with it the risk that they will become more reluctant to lend to business, perhaps stalling the nascent European recovery, although we still believe the biggest problem in Europe is demand for credit, not supply.

On the other hand, Australian banking stocks, which behave more like utilities or yield stocks, tend to come under pressure, as they behave like the bonds (that’s on top of the Australian Banking stock specific issues).

So are we calling the end of the Bond bull market? A week of selling isn’t really enough to call the end of a 35-year bull market. But we would note the speed at which this occurred on what was nominally not much “new news” this week. The most likely outcome is this abates at some point as bond markets adjust to realising growth and inflation this year aren’t as bad as first feared. Japan has shown us how hard escaping debt deflation is.

But what was most concerning, was just how quickly the market fell away last week. What news marked the top of the Tech bubble in March 2000? Nothing. It was an otherwise boring week. It had been overvalued for years and some of the greats had gone bust trying to short it. No, we’re not saying the bond market is that egregiously overvalued, but we return to the prior point that rates had gone negative in many places, where people were handing over money with the guarantee of losing some of it!

Finally, one last risk is that the bond sell-off gets disorderly, even if it doesn’t mark the end of the bull market, making it something more like the Bond sell off in 2003, or even the “taper tantrum” of 2013. Bond volatility as implied by the prices set by options traders has soared. But even more worryingly realised volatility, as demonstrated by actual trading has gone even higher. The real fear which would undermine our still bullish view on equities is that the world’s biggest and most liquid markets prove to be rather less liquid and transparent than generally believed. Now that would keep the central bankers awake – and many are already writing papers about how this might happen and what to do about it.