How is your Investment Manager looking after risk? - Morphic Asset Management

How is your Investment Manager looking after risk?

HOW IS YOUR INVESTMENT MANAGER LOOKING AFTER RISK?

It ain’t what you don’t know that gets you into trouble. It’s what you know for sure that just ain’t so.

Warning: this is a geek alert. This is not a blog about the state of markets nor about stocks. It is a blog in response to a number of questions we have fielded in meetings about risk.

WHY DO YOU GO ON ABOUT RISK MANAGEMENT? WHAT IS RISK?

One of the key distinguishing features of Morphic is the central role that risk plays in our investment process. Now of course lots of funds say this, but we’d argue that many of these confuse compliance with risk.

Risk is a hard thing to describe. A cliché is that it is like describing beauty – it’s in the eye of the beholder – but one thing we emphasize is that it can’t be separated from return. After all, who takes a risk for no return?

At the simplest level, gambling has pre-defined risks and pre-defined returns. The risk/return trade isn’t great (that’s why the house makes money), but some people prefer the fun of it, say at a craps table – the dice throwing game – famous in movies such as Indecent Proposal (unforgettable Demi?) or if you prefer ‘old school’, Roger Moore in ‘Diamonds are Forever’.

In markets, without set odds and pay offs, it becomes a little harder. Volatility is often used as a descriptor for risk and can be thought of as possessing a number of characteristics that can be mutually agreed on as possessing beauty, to labor the cliché. Further, it has the handy characteristic of being readily measurable, which again helps define it as “risk” instead of uncertainty.

The issue is that volatility isn’t a great measure of risk. Consider Bernie Madoff’s returns – great, no volatility, so no-one question them. Or a fund that writes put options, making a steady return until one day a GFC happens, the markets collapse, and investors lose all their money. Low volatility…until it wasn’t.

SO WHAT WOULD YOU SAY RISK WAS?

Allowing for the fact that it is largely ethereal, our shorthand version would be a process for interpreting the wisdom in the Rumsfeld quote about the importance of distinguishing between:

All investments involve making a judgement about those three “silos” of the risk of the investment. The more there is of the latter two, the higher return one should demand to enter the investment (indeed an argument could be made that too much of the latter results in an investment with no longer defined risk/return parameters and hence is just uncertainty).

Since ‘unknown unknowns’ are by definition unknowable, we use price as a mechanism to help manage risk.

A member of Team Morphic was watching an interview with a seasoned hedge fund who commented along the following lines:

“People ask me what the difference between active investing and buy-and-forget investing is? I say there isn’t one in the sense you still have to decide on the appropriate returns to risk.

The difference between a good investor and a bad investor though is the former has an escape plan.”

WHAT DO OTHER INVESTMENT MANAGERS SAY?

Most investment presentations by fund managers will have a slide on risk and nearly all will say “we do not believe volatility is risk” and then proceed to give a few common answers as to why risks are things such as “permanent loss of capital” (so “temporary loss of capital” isn’t risky?).

Below is an excerpt from the most recent presentation from US fund manager Pershing Square, which is living through an experience of risk management in action.

Pershing Square for those who haven’t been following the financial news is a $14bn USD (as of December 2015 – though it was $22bn earlier) long/short US hedge fund run by Bill Ackman. It has been in the news over its largest holding, Valeant Pharmaceuticals, in which it held shares worth $3.8bn, until recent controversy over Valeant’s accounting practices sent its share price down 90%. 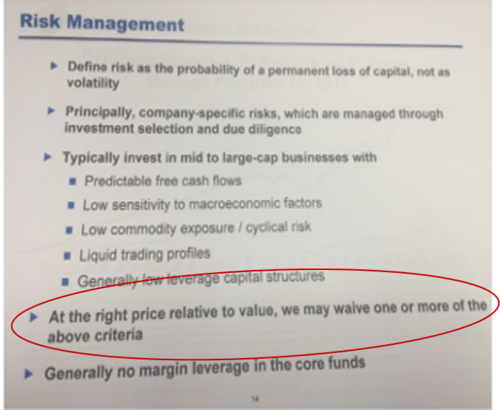 The questions we have are not related to Pershing Square’s large investment in Valeant (bet big, win big, all that stuff), but concern the apparent lack of an escape plan in its risk management philosophy. How does Pershing Square recognise when it is wrong? What does it do when it encounters an unknown unknown (though arguably this wasn’t even a case of that)?

THEN HOW DO YOU MANAGE RISKS?

You should be humbled by markets – the wisdom of crowds is a powerful force. So, humility is a good starting place. It is expressed predominately via stop losses: there has to be a point at which you walk away – your escape plan.

We have other more technical measures such as Value at Risk; size limits; stress testing and scenario testing. But these are tools at the end of the day.  A lack of humility will negate all the tools in the world.

All together they are designed to answer the question we are not asked enough: how do you blow yourself up? Never say never, but it is hard to envision Morphic owning a stock all the way down at 90% and joining their Board as our risk management plan.

Perhaps the investors in Pershing Square may have been better served starting on the blow-up (risk) side of the equation rather than just focusing on the returns.

As experienced golfers say: “The woods are full of long drivers…”