“It’s supposed to be hard. If it were easy, everyone would do it.”

Tom Hanks, A League of Their Own

This outlook was part of our latest Half Year Report which was published earlier this month.

In January 2014, over five years ago, we wrote in our Half Year Report:

“As a nervous January in the markets comes to an end, we still believe the ending of active monetary printing is unlikely to derail the economic recovery in the US”.

“[…] the consistency of our view that markets are more than ever driven by the monetary cycle. It has been this protracted low interest rate environment and the endless pushback in expectations as to when it would end that has prompted us to stay so fully invested since the Fund was launched – and if anything, our failing has been in not having a more aggressive risk appetite.”

“Either course starts with the same question: how many hikes will there be in this cycle? The secondary questions are: has the US erred by hiking at all? How can you justify raising rates with so little inflation?”

In July 2017, after the Federal Reserve had begun the hiking cycle:

“it never looks like higher rates are having an effect, until it is too late. The hard part as an investor is how to position yourself in this phase of the cycle… Selling early and carrying a lot of cash isn’t just somewhat costly for investors, it’s extremely costly. Markets charge a high fee to claim intellectual bragging rights.”

We repeat the above for a few reasons. Firstly, directionally the firm was right: the cycle will be longer than expected – so stay invested – yet capitalising on this has been incredibly difficult as per the opening quote, with the large drawdowns of 2016 and late 2018.

Secondly, we now have answers to a few of the questions posed over the years. Q: How many hikes in this cycle? A: With the markets implying close to 100% probability of a rate cut in July, nine hikes was what the Quantitative Easing (QE) post-GFC system could bear (Figure 1). Substantially more than the bears thought, but also much less than prior cycles.

As we have noted through the year in our monthly reports, history shows that the Federal Reserve moving from a hiking bias to a pause often sees equity markets look through the weak economic data and rally. This supported our generally positive outlook through the period keeping us fully invested for the majority of the period. However, portfolio hedges applied particularly in May when the tariff issue escalated heavily detracted from performance.

The 1995 analogue in particular is playing out very closely. In 1995, the economic data weakened significantly (top box), which caused the Federal Reserve to move from hiking to a pause, to cutting. Notably, equity markets rally despite this weakness in data (Figure 2).

In 2019, the playbook appears to be similar with weakening data about to translate into Fed cutting and equities rallied through all of this (Figure 3).

As can be seen above, this is not unusual as equities usually rally under most scenarios, until the data goes heavily against the market, forcing it down (circa 2008 and 2000) (Figure 4). In January 2016, we questioned how the Fed would justify raising rates with so little inflation. Now, this has turned into a live question at the Federal Reserve. The persistent inability for inflation to rise above their mandated levels, even with unemployment this low, has clearly worried some at the Federal Reserve. This is why we are looking at the unprecedented actions of cutting interest rates with economic data at levels where cuts have never been done before.

Figure 4 – S&P500 around the end of Fed tightening 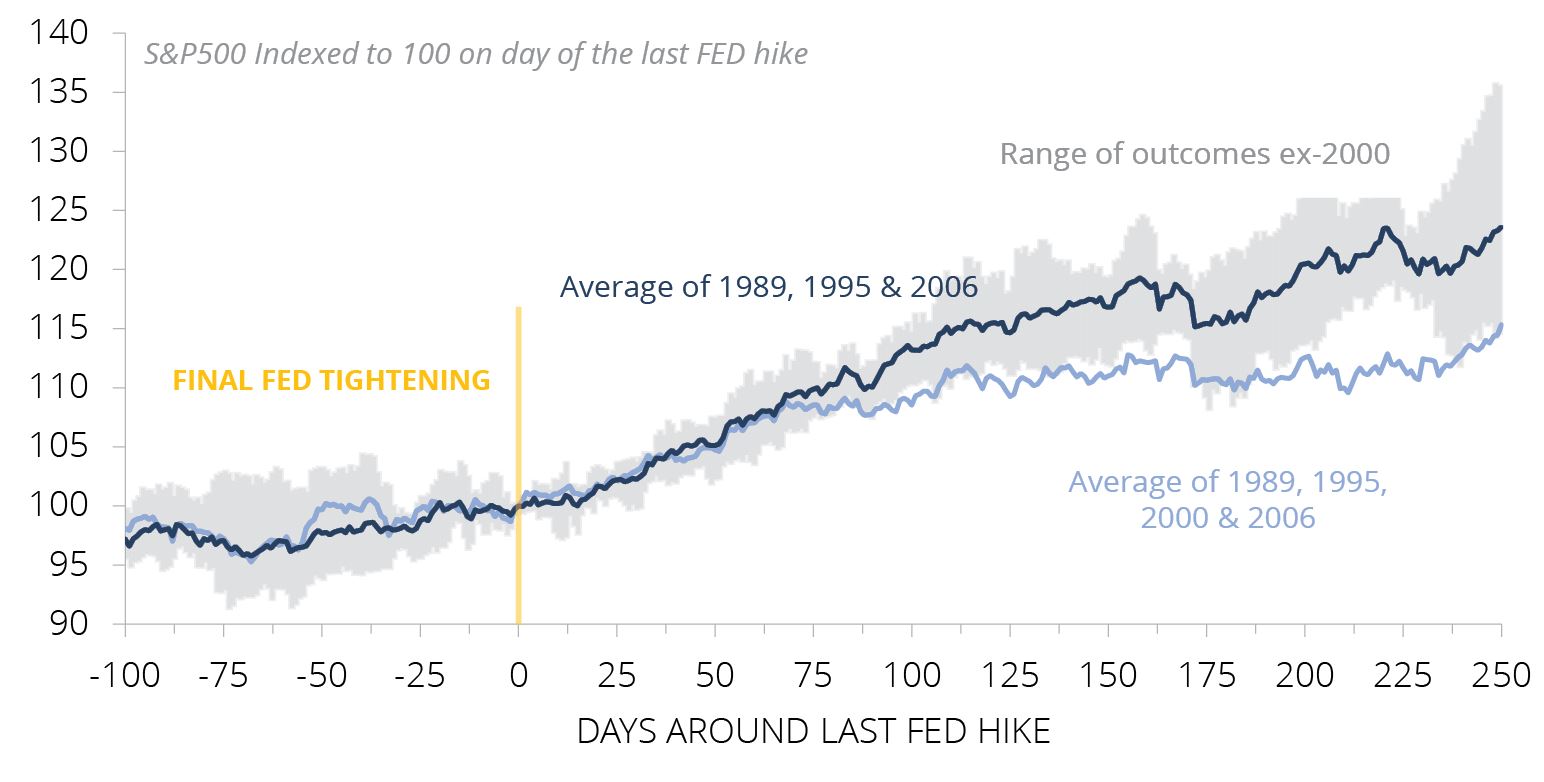 If no recession appears on the horizon, we see lower costs of funding and the return of “TINA” (“There Is No Alternative”) sending stocks higher over the coming half. One way to view the upside from TINA is to look at the implied Equity Risk Premia (ERP). This is the premium equity investors get paid for the risk and volatility of equities versus bonds. Despite markets at highs, it is only at the middle of the 5-year range (Figure 5). 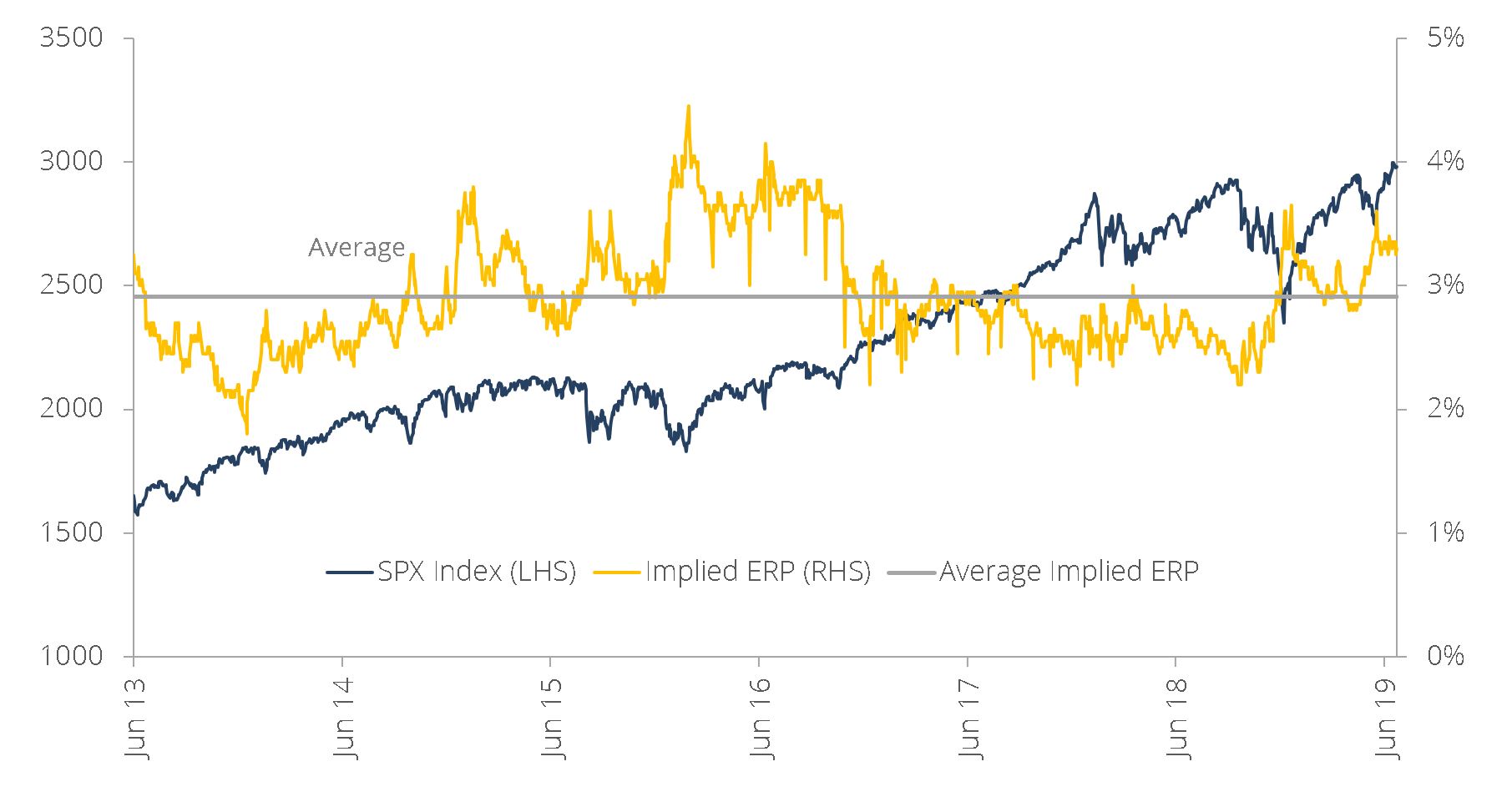 In summary, we don’t see bond yields rising much, but the “mid-cycle slowdown” will see equities trade higher anyway. Later in 2019, if data is still strong, then higher interest rates are likely to cap the move (this will narrow the ERP), or worsening data leads to downgrades (lower EPS can also narrow the ERP).

Any weakening in the US dollar could provide relief for beleaguered Emerging Markets, which have been a side-show to global markets for some time, though we are cautious on this view, having been burnt on this call before! 1998 certainly doesn’t provide comfort to the view (hello LTCM and Russian default).

So what will we be watching in the second half of 2019? Firstly, that the weakness in regional survey data of manufacturing doesn’t affect services, the larger part of the economy.

Secondly, the trends in some underlying metrics of employment data are not great, as we can see in Figure 6 below. 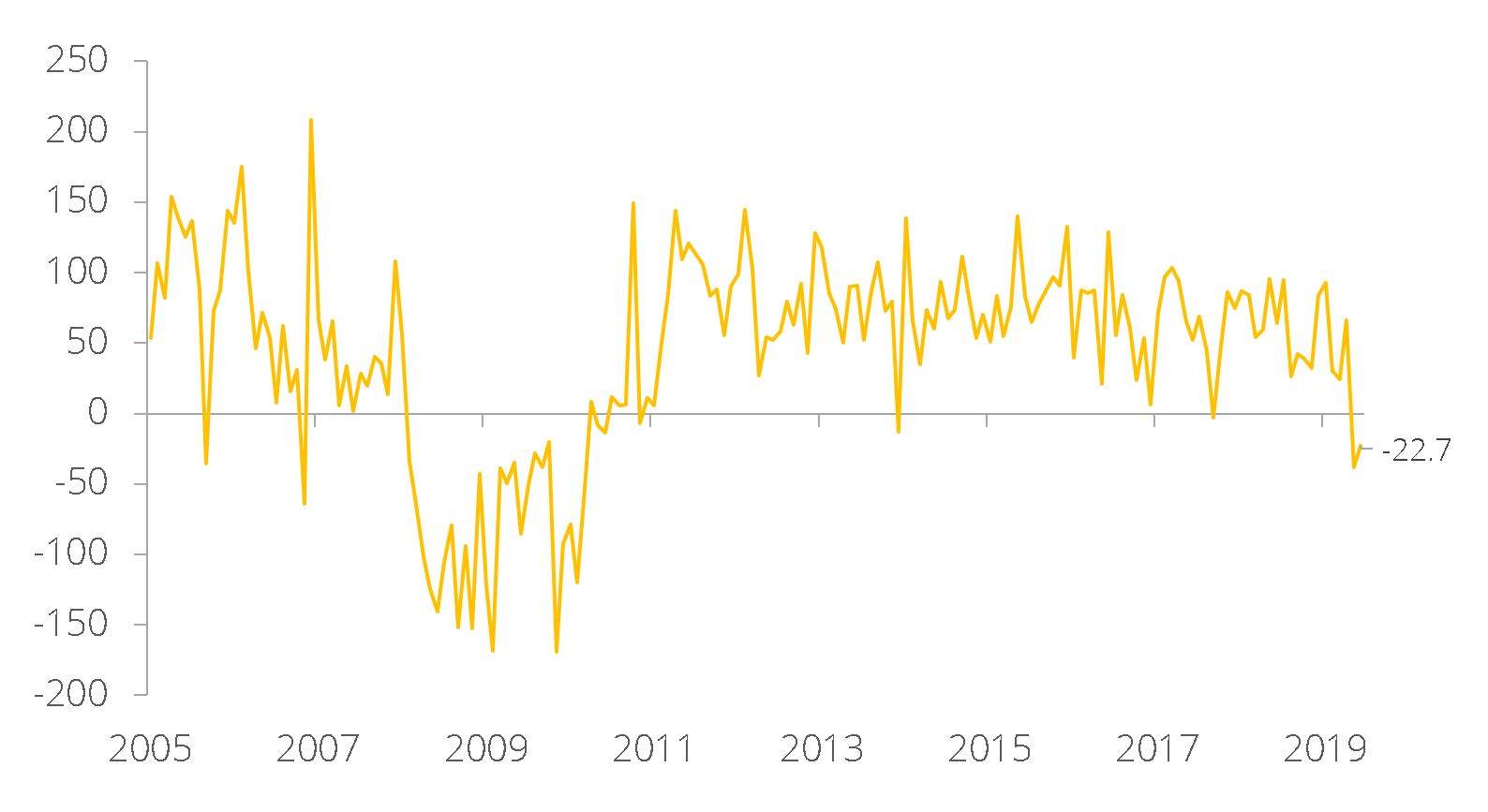 Now any economic data is going to have some areas of weakness (note the “false alerts” of the rises in job losses in 2012 and 2016), but then we would want to see these areas stabilise.

We would describe our playbook here as: keep an open mind rather than be dogmatic. Table pounding isn’t a great trait at the best of times as the world is rarely as straightforward as you think, but the range of outcomes here is larger than usual.

We conclude this Outlook by taking a step back from the upcoming half year to peer over the horizon. It appears the world has reached the end of what monetary policy can do. With Europe and Japan interest rates below zero, and even Australia at the verge of QE, the 40-year era of central banks as the maestros of the economy appears to be drawing to a close.

The era of acceptance of neo-liberal market ideas is also closing: two-thirds of Millennials agreed that “capitalism has failed and governments should exercise more control over the economy”. This has serious ramifications for economies and markets for the coming decades, as policy is reflective of the moods of the populace.

A phrase we think you will be hearing more of in the not too distant future is “MMT” or Modern Monetary Theory. The crux of MMT is the idea that in a fiat currency (like most in the Western world where it is paper backed solely by a governments word), governments cannot default on debt denominated in its own currency and as such, Central Banks can perform “People’s QE” where instead of buying just financial assets, they “fund” governments social needs. It is the passing of the baton of controlling the economy and fiscal policy from independent monetary policy run by unelected central bankers back to governments.

If there is one common mood globally, it is a reaction against the inequalities that globalisation and disinflationary monetary policy have wrought on the Western World. The populism of Trump on the right and the hardening of the views on the left are symptomatic of this.

What would be the ramifications of MMT becoming the new standard? Profound and wide-reaching, tearing up every consensus. Which is, by the way, usually what markets do. Secular stagnation – aka Japanification – is no longer the base case. Deflation and lower bond yields are less of a concern, rather higher rates and yields. Infrastructure type assets are poor investments. Equities will probably fare poorly. Assets like gold can once again become a hedge against rampant profligate government. The standing world order is overturned.

Now before you go and sell everything, these are issues for the next downturn and are not necessarily what economies and populaces will choose. But we feel it’s important to think ahead of emerging issues, rather than simply reacting naively when we get there. It is an area we will be watching closely. 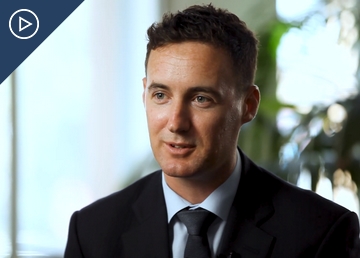 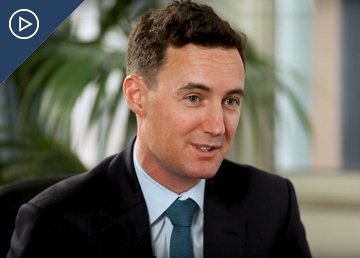