GCP Applied Technologies: when it pays to be Active rather than Passive - Morphic Asset Management

GCP Applied Technologies: when it pays to be Active rather than Passive

GCP APPLIED TECHNOLOGIES: WHEN IT PAYS TO BE ACTIVE RATHER THAN PASSIVE

For this week’s blog we switch gears from a macroeconomic focus, and instead we focus on one of our stocks: GCP Applied Technologies Inc. In a world where passive investment options have grown rapidly to be nearly 35% of the US market, opportunities like this will become more frequent.

At this point I’ll throw over the blog to another member of “Team Morphic” whose stock it is, to explain to readers why we have been so enamored with this little company out of Boston.

HOW DID GCP COME TO BE HERE AND HOW DOES THIS RELATE TO PASSIVE INVESTING?

GCP is a new and relatively small ($2bn USD market capitalisation) company which was spun-out of its parent WR Grace & Co. (Grace), a larger chemicals and materials company, at the beginning of February this year. Grace shareholders received shares in GCP pro-rated according to their shareholding. Prior to the spin-off, the Parent company published a prospectus much like that accompanying an initial public offering and which contained information to educate investors as to the key characteristics of the Company as well as recent financial performance (three years of income, balance sheet and cash flow statements). This information, in combination with relevant information from the Parents’ past financial reporting, suggested that GCP had many of the attributes that we would expect to see in a high quality business.

The spin-out of GCP did not happen at a prescribed price, rather it was simply up to the market and therefore the balance of buyers and sellers on the first trading day to determine the price. It was at this point that the impact of passive investors’ predictable behaviour provided active investors an opportunity. Parent company Grace had a market capitalisation of USD 7bn and was a constituent of various indices. At its point of independence GCP being a smaller company (USD 1.4bn) was not a member of many of these indices and therefore the passive managers of the funds that follow these indices naturally sold their inherited GCP stock.

The first sixteen trading days witnessed more than 25% of GCP’s shares changing ownership and it is likely that selling by passive shareholders accounted for a significant proportion of this volume. It is also likely that some shareholders considered their inherited holding to be too small to be meaningful in a portfolio context, or simply were not interested in the business or simply too lazy, and therefore sold without considering its individual prospects. During this time GCP’s share price fell from USD 20 to as low as USD 14.50 even though no aspect of the business had fundamentally changed (Figure 1). 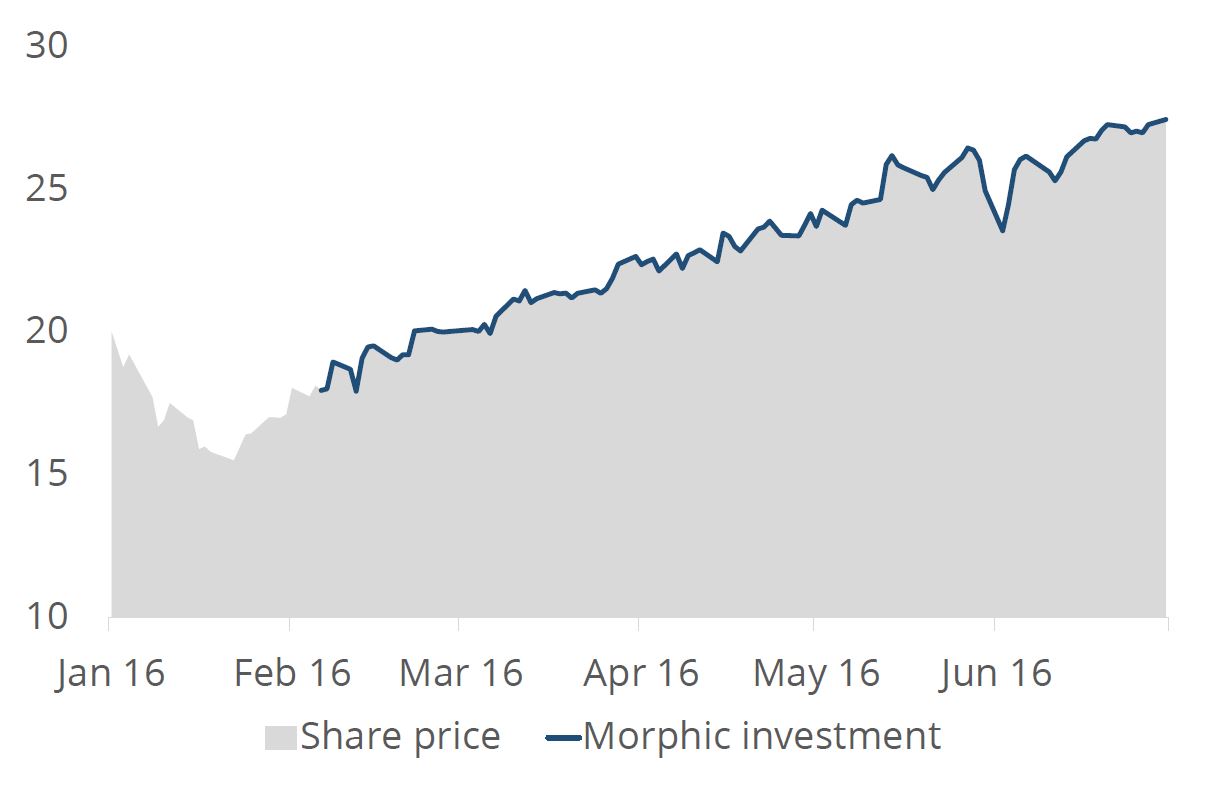 OK, SO THAT SAYS IT FELL, BUT WHY IS GCP INTERESTING AND WHAT EXACTLY DO THEY DO?

GCP is a long-established and leading global provider of products and technology solutions for customers in three operating segments:

The figure below tries to give you an idea of where their products are used. 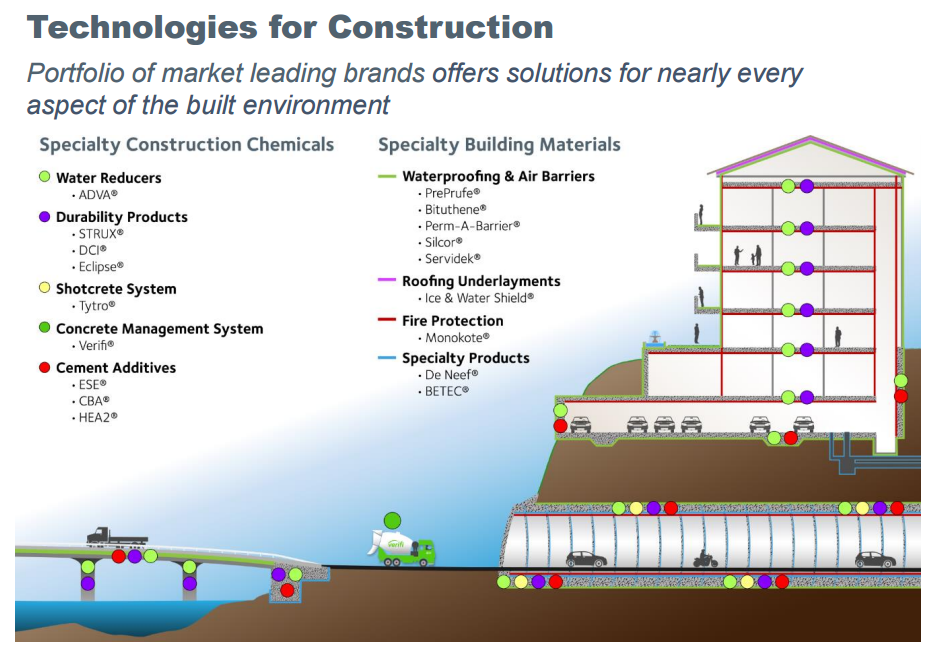 BUT WHY ARE THEY A QUALITY BUSINESS RATHER THAN SIMPLY CONCRETERS?

Whilst the end products which contain GCP’s technologies such as cement and drinks cans are clearly commoditised, the Company’s products contribute significant value-added to the end product. For instance, their additives can tailor the setting speed of concrete down to the hour. This is illustrated (Figure 3) by the fact that they earn high gross margins relative to other peers such as Australian company Boral Ltd.

This value-added is also demonstrated by the Company’s consistent pricing power with many of their products contractually passing on input price inflation regardless of the cyclicality of end markets. High gross margins flow in to high operating margins which have been growing steadily as a result of this pricing power as well as economies of scale in manufacturing and marketing. Pricing power is also a likely consequence of GCP’s strong market positions across all of its businesses with two thirds of the Company’s total revenue coming from products that are first or second in terms of market share.

GCP’s business model is reasonably capital-light with an emphasis on its research and development (R&D) activities which have produced a strong portfolio of intellectual property in the form of patented products and processes, and leading brands and trademarks. That the Company is headquartered in Boston, in close proximity to various leading academic institutions, is no coincidence and gives access to scientific talent. We suspect that the replacement cost of the Company’s R&D-focused asset base is multiples of its book value (not to mention the intangible assets).

GCP’s businesses historically generated high un-levered returns on equity within its Parent and going forward these returns should be enhanced by a more efficient balance sheet funded by moderate financial leverage.

SO WHAT IS IT WORTH?

Clearly over the last six months’ investors have come to understand the business much better and have moved to value it in line with its European peers. Shorter term, it’s worth $26-30 according to our estimates. Longer term, we suspect the business will get bought out by a large global player looking to grow its name in their higher margin space, though that can’t happen for the first two years of independence.

In the meantime, we expect GCP to generate strong cash flows and grow earnings by 7-10% a year which in a world of low growth, is what we call a nice “steady compounder”.