First anti-forecast and US manufacturing data

FIRST ANTI-FORECAST AND US MANUFACTURING DATA

MORPHIC MADE SOME PREDICTIONS BACK IN JULY – HOW ARE HAVE THEY WORKED OUT?

Ahh, yes those. Is it really the end of the year already? After an excellent round of picks back in January, our year-end calls have been more a mixed bag, which is somewhat reflective of the “topsy-turvy” period of the last 6 months. Given it looks like a few of them will go down to the wire of Dec 31st, we start by reviewing one that at this stage looks fairly clear cut (famous last words!): our call on the Euro Crisis not coming back this year.

Back in July, we nominated as one of our calls: “European Periphery will NOT be tested again in 2015, as measured by Spanish bond spreads”. Our view was that the combination of further Quantitative Easing and improving local data, coupled with Greece having been taken to the brink and deciding it wouldn’t go over, suggested the fears would subside over the half.

If we look at an updated version of the chart from July, we can see that this thesis has played out over the half (dark blue line since our last prediction). 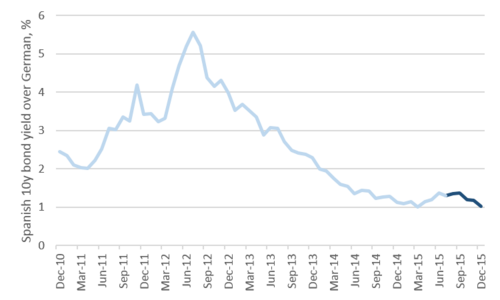 In an interesting side note on the Greek situation, two members of the Morphic team attended a presentation given by the prior Greek Finance Minister, Varoufakis, who managed most of the negotiations with Europe and the IMF, who even managed to pose for a few pictures.  Who thought economists could be elevated to such celebrity status!

We learned a fascinating fact that Varoufakis had assigned a team of global economists to privately develop a ‘Plan B’ to leave the Eurozone. What his team found out was the more they looked into it the more impossible it looked. The Eurozone was designed to not be left.

Why is that important for markets? If even someone as smart and determined as Varoufakis cannot develop a plan to leave then who can! It means future events that may occur in other countries, such as Portugal, will encounter the same roadblocks.

So we will chalk that up as a win. Next week we’ll look at the other Euro related anti forecast that focused on the currency.

I THOUGHT THE DATA WAS GOOD IN THE USA – ISN’T THAT WHY THEY ARE HIKING RATES? WHAT’S WRONG IN MANUFACTURING?

This week we got the main monthly manufacturing survey results for November across the United States and they were not pretty. We saw the worst print since 2009 recession in the most commonly followed one, the ISM survey.

Why are these surveys so important? Despite manufacturing becoming much less important in terms of share of the economy, it is still viewed as a good lead indicator due to its cyclical nature. Indeed, it still has a very correlation with the growth prospects of the overall US market in terms of GDP growth rates and both overall employment. The chart below shows how good of a lead this series has historically provided for future levels of job growth, 6-12 months from today. 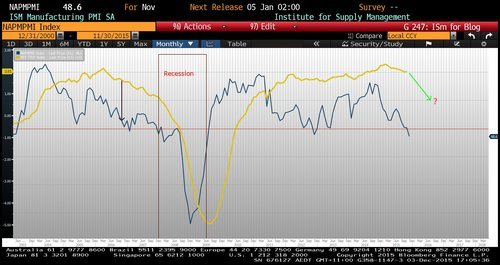 As can be seen in the chart above, manufacturing has been slowing for the last 12 months as US industries has been buffeted by a rising US dollar; lower Capex demand due to falling Oil prices; and a weakening global demand profile as China and other countries slow down. This data contraction was however much worse than expected.

On the other hand, employment growth has remained strong, as the services related part of the US economy employs a lot more people and is less reliant on exports and global growth. So you are seeing a divergence between the two, one that is quite rare, and larger than what we have seen before.

IF THIS IS BAD, HOW DID THE MARKET REACT?

“Bad news was good news” and we saw the market price what is being coined “A dovish Hike” by the Fed, i.e. we get a December hike still, but the pace of future hikes will be very slow. There is also the school of thought that this trend of divergence has been in place for some time, thus giving support to the argument that this data series has outlived its useful life in predicting what is a vastly different US economy to 30 or 40 years ago.

WILL THE FED HIKE INTO THIS?

Historically the Fed has hiked when the survey has comfortably been in expansion so to hike now would be uncharted waters. Time and time again we hear the Fed say they are “data dependent” but it appears the Federal Reserve’s priority appears to be to just get the first hike done to remove the volatility that this uncertainty has been creating.

AREN’T YOU GUYS CONTRADICTING YOURSELF ABOUT HIGHER WAGES WITH JOB GROWTH BEING A RISK NEXT YEAR THEN?

Unfortunately, this line of work provides very little in the way certainty, apart from the certainty that one will be wrong often! What we are saying is that job growth and a tight labour market could see a risk that a Fed that wants to go, is forced to do more than they first thought. But jobs data is a lagging indicator in many respects. These surveys provide something more of an “over the horizon” view and this suggests that jobs growth, if the prior relationship holds, is going to slow through next year and perhaps slow swiftly.

This needs to be kept in mind as we try to put the jigsaw together of what 2016 may look like for markets and the economy.