Fed Rates – Where are we now? - Morphic Asset Management

Fed Rates – Where are we now?

FED RATES – WHERE ARE WE NOW?

There was a brief period when “Faded (Where are we now)” topped the charts recently and we thought it would be an apt title to this week’s blog.

Late last year, our Head of Macro and Risk did an excellent piece looking at how markets behave once the Federal Reserve goes on pause after a rate hiking cycle. The key findings being the equity market usually rallies, interest rates fall, and economic data slows. 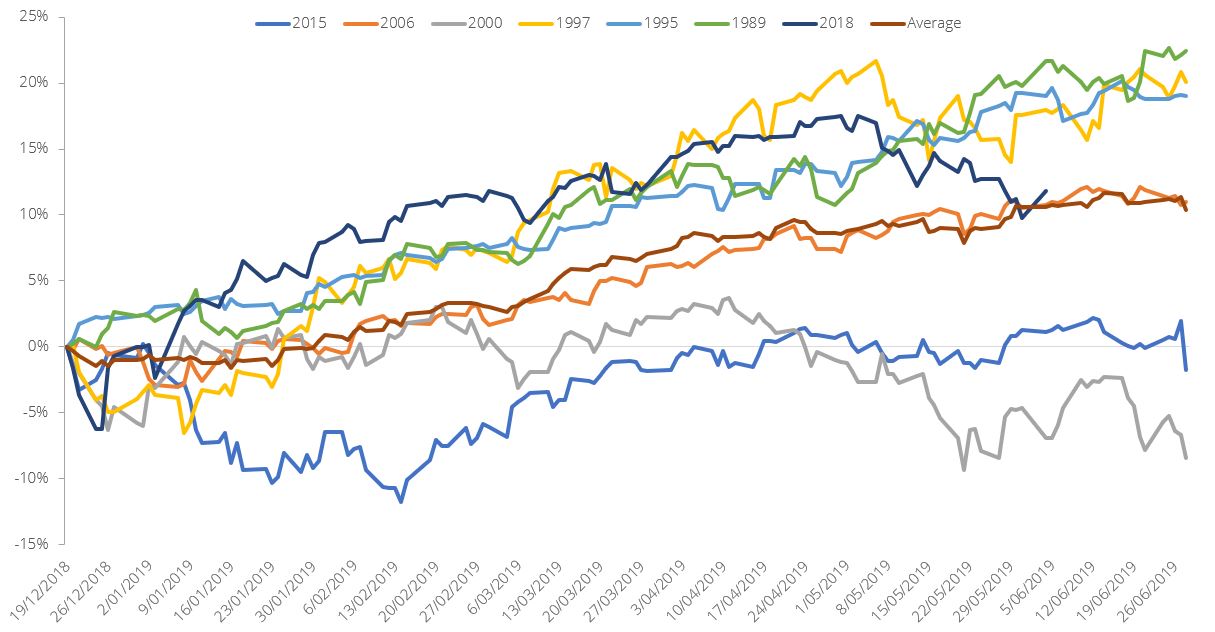 So far, about right.. that is up to about late-April. That playbook worked – indeed it worked far better than we even thought it would, with Morphic throwing in its bullishness earlier than we should have.

But May has seen a marked change of sentiment. US 10-year yields have plunged to lows and markets are now pricing in a rate cut by year end, with a 30-40% chance of two cuts (Figure 2) or more.

Emerging Markets have started to underperform dramatically, having largely tracked developed markets during the first quarter.

The other somewhat alarming anomaly of note is the persistent strength of the US dollar. With the US being the only strong economy last year raising rates, USD strength could be explained by interest rate differentials. The “Fed Pivot” and removal of rate hikes to be replaced by cuts has done nothing to slow “King Dollar”. A strong dollar makes it harder for liquidity conditions outside the US putting pressure on everything from industrial commodities to equities.

So what to make out of all this?

Returning to last year’s playbook, the weakness in data was to be expected to some degree. What is disconcerting, is that forward indicators such as the Purchasing Managers Index (PMI) for May continues to decelerate. 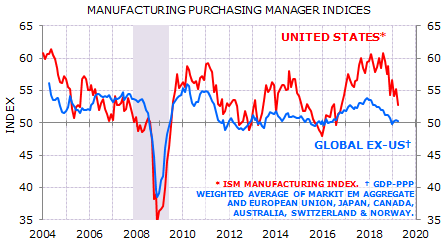 How much is due to tariffs impacting confidence is hard to know because at the moment there is a spread between what companies are saying – the PMI – and what they are doing – jobs data, as they continue to hire staff, pay more and with no job layoffs.

Secondly, Non-Executive Director of Morphic and strategist Gerard Minack, points out that the US has never been pulled into a recession by falling exports since the US usually runs a trade deficit (they import more than they export) and also a relatively small portion of the economy is based on external trade compared to other countries. 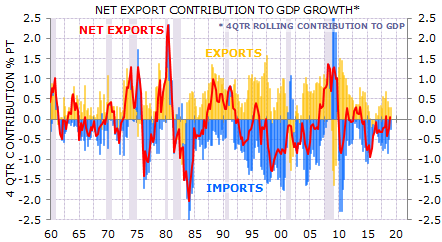 As such, with people getting jobs and pay increases, it is hard for the US economy to “spontaneously combust”.

From here we see two playbooks:

So, if we assume the market is correct and the Federal Reserve does cut rates this year or early next year, that is a pretty large range of outcomes.

What should we watch to know which way things go? We would nominate three things:

These are all conditions to watch – but having said that, early 2016 had a lot in common with the above and the markets recovered.

For now, Morphic has been building individual short positions in stocks to the point where we have more short stocks than longs for the first time since we launched, rather than a dramatic raising of cash levels which were raised modestly over the month.