Yesterday’s PNG court ruling that declared Broadspectrum’s Manus Island detention camp illegal should end any doubts for the company’s shareholders about taking Ferrovial’s $1.50 a share offer, which closes on May 2nd.

Maybe it will also give the Broadspectrum board an opportunity to climb down from its increasingly untenable position that the Ferrovial bid isn’t in shareholders’ best interests.

That position was already looking shaky when shareholders saw the value of their shares slump 10% yesterday to $1.11 after Ferrovial refused to extend its May 2nd deadline. The fall occurred because the bid’s success now looks bleak with just 16% of shareholders accepting so far against the 50.1% minimum required for everyone who wants $1.50 to get paid. Ferrovial is clearly not bluffing as it can now no longer increase the bid (which it has already raised from $1.35), or extend the deadline, or waive the minimum acceptance level.

Morphic is predominantly an investor in global shares, but we do keep a watchful eye on opportunities at home as well.

One theme we keep a tight focus on is takeover bids that involve a local target and a foreign bidder.

Recently the Morphic Global Opportunities Fund did very well from misunderstandings of regulatory risks associated with the takeover of Australian listed document storage company Recall, by its US counterpart Iron Mountain, which ultimately went ahead, as we expected, despite most in the market expecting it to fail.

Currently the Fund has a small position in Australian services firm Broadspectrum (stock code BRS, and better known as the former Transfield), which is in the last days of a takeover bid from its much larger Spanish counterpart Ferrovial.

BRS now appears to be a highly cash generative company, and we purchased the shares in the belief there would be upside even if the bid failed, and the shares fell back in price in the short term. However there is a time value to money, and we believe the company would have struggled to get its share price to $1.50 for at least a year, even in the absence of yesterday’s PNG court ruling.

That is why we believe shareholders should ignore the advice of its board and take the Ferrovial offer.

BRS has one of the highest paid boards in Australia, especially when adjusted for its tiny market cap:

It also has a track record of error when it comes to takeover bids, having summarily rejected an initial approach at $2 a share from the current bidder Ferrovial more than a year ago.

Arguably it did a better job in rebuffing Ferrovial’s initial $1.35 bid in the current round, and deserves credit for extracting an increased bid of $1.50 price earlier in April.

However we think shareholders should be wary about taking its new advice to reject this as well.

In doing so it appears to be relying on a revised Independent Expert’s Report (IER) from Ernst and Young (E&Y) that we think makes little sense.

Kudos to the board for getting an IER, and initially E&Y did support the board in rejecting Ferrovial, with a plausible calculation the company was worth somewhere beneath $1.71 to $1.98.

However following disappointing news BRS has had during the bid on its contract to manage the Manus and Nauru detention camps, we feel E&Y had to really torture the data to keep its valuation above the $1.50 bid price at a range of $1.60 to $1.85.

The reduction came because although BRS got an extension of its current contract, it has been told to bid on a reduced scope for the rollover contract, where it has one (undisclosed) competitor.

The change in terms resulted in E&Y reducing its estimate of the sustainable EBITDA for BRS’s largest division (Defence, Social and Property) from $175m a year to $135m a year. However oddly, it also raised its assessed EBITDA multiple range from 4.25x to 4.50x to 5.25x to 5.50x.

As the tables below show, had the same methodology been applied in the revised bid as the initial bid, the company would have been valued in the range of $1.38 and $1.63, with a mid-point of…. Wait for it….$1.50! …. which is exactly what Ferrovial has offered.

No wonder the bidder is frustrated.

The problem is that about a third of the share register is retail, and retail investors tend to follow the board’s recommendations on takeover bids closely.

But if this bid fails and the share price stays around these levels, the board is going to have to tell a pretty good story at the next AGM not to get its remuneration report voted down, we suggest. 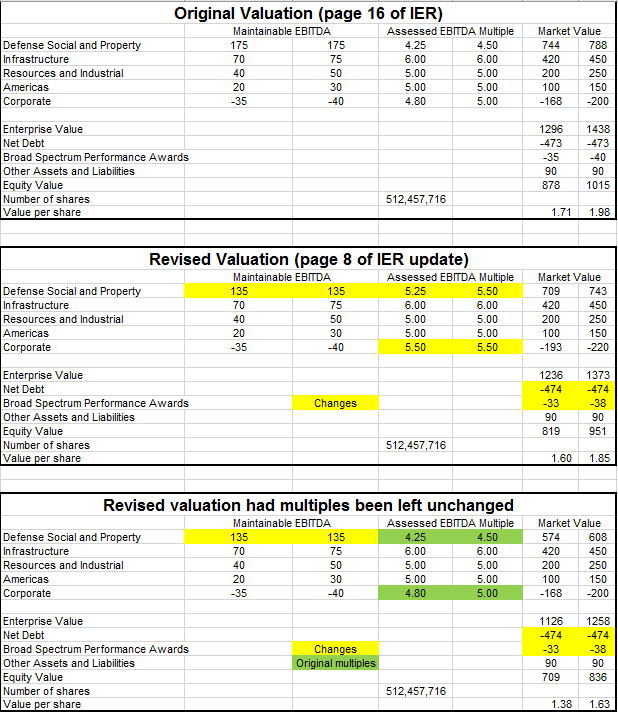