This is Big(ly)* Part II: Outlook for Assets in a Trump World - Morphic Asset Management

This is Big(ly)* Part II: Outlook for Assets in a Trump World

This is Big(ly)* Part II: Outlook for Assets in a Trump World

Last week we gave a review of the Trump victory and what we got right and wrong. This week we look forward into what different markets may (or may not) do in response to a Trump presidency.

WHAT ARE YOUR VIEWS ACROSS MARKETS?

This would appear to be another area in which the much derided “experts” failed again. Nearly all the sell-side research and consensus on the buy-side was that equity markets would fall on the news of a Trump victory. Most of the buyside predicting (or fearing) a Trump victory had purchased puts or other downside protection such as carrying more cash.

And this was correct. For 8 hours. Why did this happen?

It would seem to be a confluence of reasons. Firstly, for all those with put protection, unwinding that creates a natural “bid” in markets.

Secondly, Fund Manager surveys have consistently shown that the buyside was as heavily positioned in cash as they have been since the GFC (see Figure 1 below). So when stocks fell heavily in the first few hours in Asia, buyers emerged to use their cash to buy stocks they liked at cheaper prices. 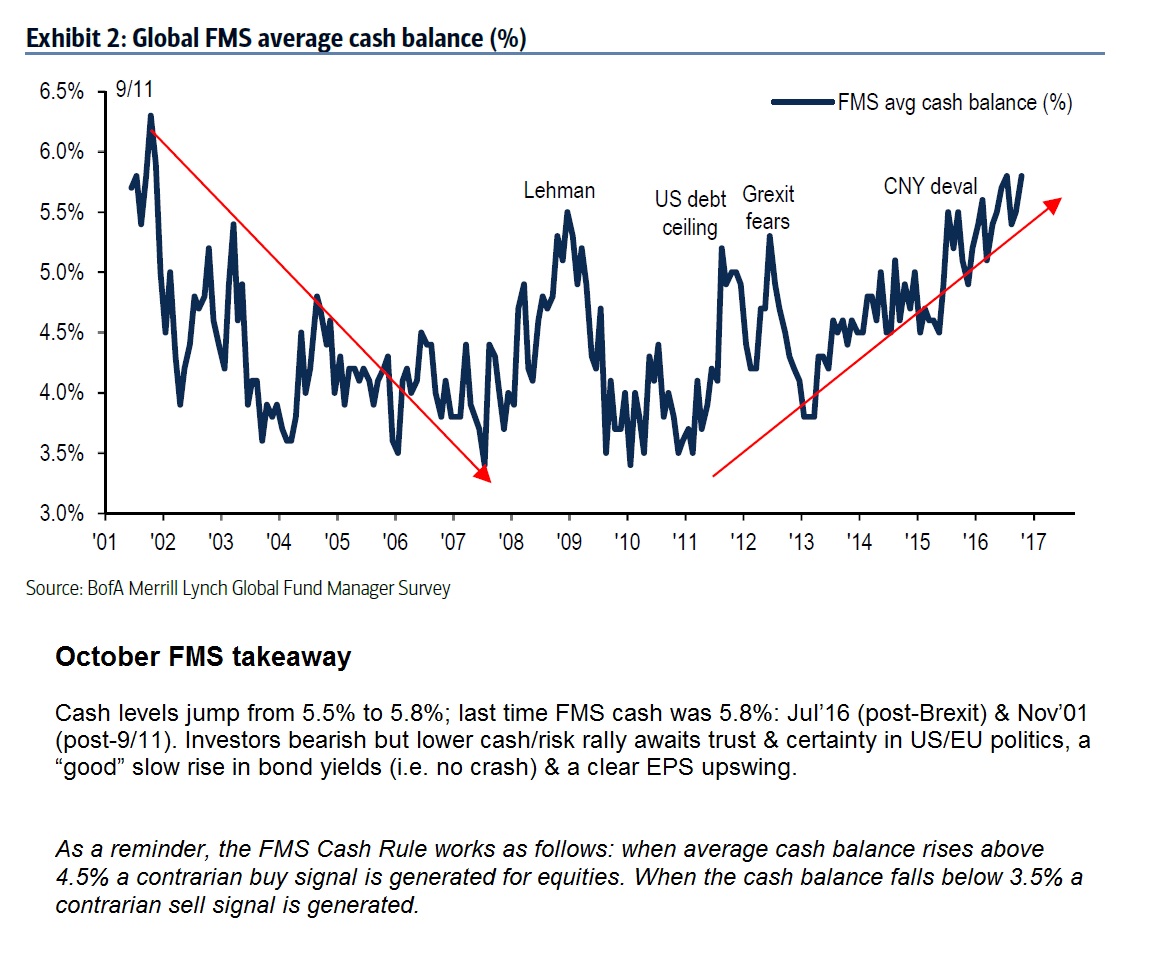 Thirdly, there had been a growing view that monetary policy had reached the end of its ability to work and that “fiscal policy” or expenditure by governments was needed. In America this couldn’t happen with a Democrat President and a house that is Republican and led by the Tea party. What became apparent over the course of the election day was that not only would Trump win but the senate would fall to the Republicans. As such, Trump has the ability to push through large infrastructure expenditure (traditionally the preserve of Democrats) as well as tax cuts, assuming the Republican party supports them. Yet perversely, the Democrats could end up supporting the infrastructure bill even if the tea party arm doesn’t!

Welcome to the new world of “post party populism”.

WHAT HAPPENS TO ASSET CLASSES?

Let’s go through asset classes in the order of confidence we have in the predictions:

1. Bonds: Bad
If Brexit saw bonds go bid as people went to safety, this time around there has been selling in bonds. Why? Because all the above will, if implemented, be both inflationary (as the US economy is already near full employment) and increase the supply of bonds via increasing the budget deficits. More supply, same demand, equals lower prices.

This is a world away from the world of June where asset managers were buying “negative yielding bonds for capital growth and equities for yield”.

Bond yields were already rising in the background as it became clear that the deflationary fears of earlier this year were receding (yellow line). This just accelerated the move (red box). 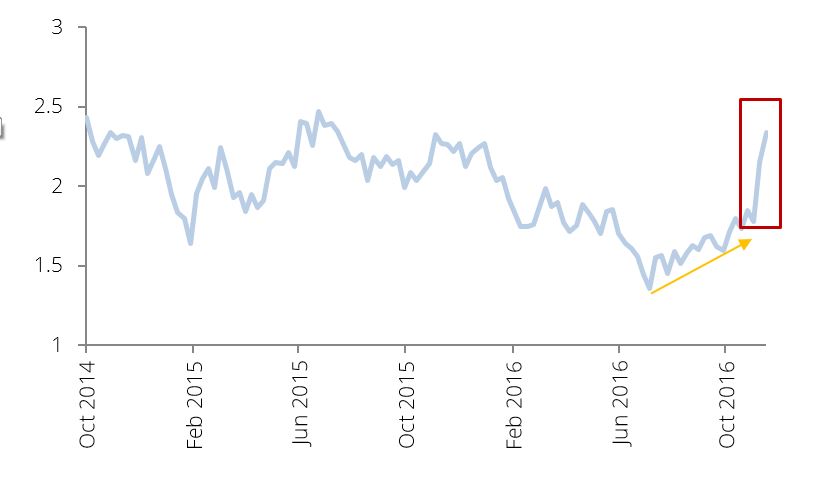 2. Commodities: Good
Like bonds, commodities were already moving in a direction before this week. They were better this year as Chinese demand had improved and the low prices of the last few years had seen a rationalisation of supply.

Whilst the US isn’t the largest consumer of commodities like copper that it used to be before China, at the margin this adds to demand, so it is likely to keep them going in the same direction.

3. US Dollar: Good. For now.
Higher US bond yields is likely to attract capital, particularly from those places like Japan where the Bank of Japan has pegged 10 year yields at 0% (which we think will be a disaster for them some time in the near future).

There is also the large amount of cash held offshore by corporates who are going to be encouraged (via lower tax rate) and then coerced (via including it in their US taxes if they don’t repatriate it), under Trump and Republican tax plans. This is a LOT of bid for US dollars.

Medium-term, there are concerns as to whether this raises questions about the US reserve currency status, if some of the wilder plans get implemented. So, in that light, gold may be a winner then, even if it’s a loser in the short-term.

4. RBA: Rate cuts are done for now. Up Next?
A fascinating little puzzle here. The RBA in 2017 could be facing higher terms of trades (therefore higher real incomes); a lower AUD (due to the above); higher inflation; and better jobs.

At the same time as the cuts of 2016 flow through the real economy (working on the 12-18 month lag principle).  With surging house prices. Is this really the environment of rate cuts? Sounds more like a rate hike.

5. Equities: A mixed bag
Harder to say with certainty on equities. Clearly cyclical sectors should do well out of these changes. They are cheaper and under-owned still. But offsetting this are the “stocks that look like bonds” such as REITs and consumer staples which have done well from low rates who would now seem in trouble.

Some regions could do well (Japan), but other emerging markets struggle from a higher US dollar. Much higher bond yields will also pressure equity valuations. We would say it’s not clear either way, so we don’t hold a strong view here currently.

Of much more interest are the regions and sectors that can do well rather than the overall market call.

*Bigly, the strange adverb that no-one is really sure if he actually said, or what it means: http://www.bbc.com/news/magazine-37483869