This is Big(ly) : Our musings on the Trump victory Part I - Morphic Asset Management

This is Big(ly) : Our musings on the Trump victory Part I

This is Big(ly) : Our musings on the Trump victory Part I

This is Big(ly): Our musings on the Trump victory Part I

Our resident digital marketing expert quietly asked us if we could write a blog on the Trump win. It turns out analysis of the intricacies of the Asian airline industry doesn’t generate the web traffic that is required in the new age of President-elect tweets at 3am!

HOW WAS MORPHIC POSITIONED FOR THE US ELECTIONS?

Completely and utterly wrong on thinking who would win, but perversely, correct on where markets would end up by the end of the week!

We came into the week convinced on two matters. Firstly that the probability of a Brexit happening again was low. Whilst we blogged after Brexit about the continuing rise of populism that has been evident now for at least a few years, the permutations required in this election for a Trump victory made it unlikely to occur. Wrong. Secondly, that with the election gone, markets would rally into year-end due to positioning from funds that had a lot of protection in place.

What did we get wrong? Our starting premise was that, simply, Trump had to win Florida to stand even a remote chance of winning. Find evidence that there isn’t a large enough swing to him there and his chances of winning reduced from possible to implausible. You see if Florida was lost, he had to win all seven remaining swing states.

FIGURE 1 – THE WAYS CLINTON OR TRUMP CAN WIN THE ELECTION 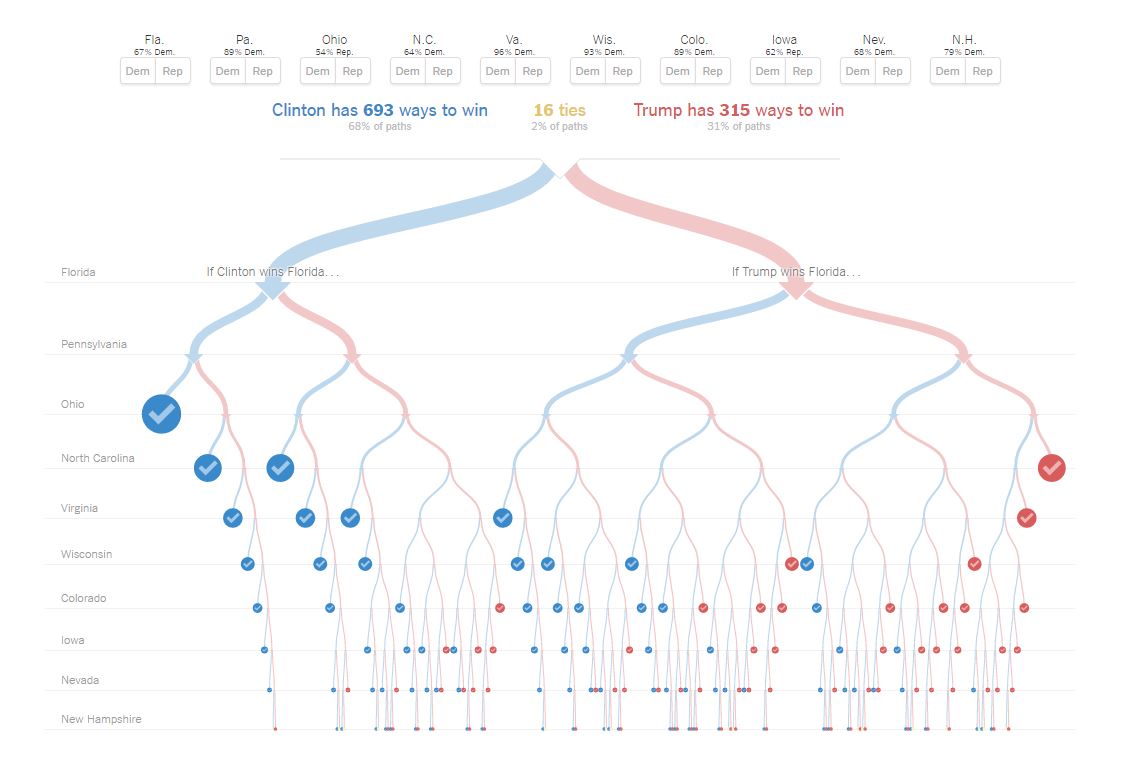 So, we set about finding evidence. Turns out there are people who dedicate themselves to collecting early voter data! The evidence seemed to be that Democrats were polling well where they needed to. Hillsborough County in Florida has picked the presidential winner in 11 of the last 12 contests. Below is an excerpt from his report the weekend before the elections.

Hillsborough had a record day, with Dems leading the day by a 3500 voter plurality. NPA voters made up 30% of the voters yesterday, which is pretty remarkable, out placing NPA registration at 28.

Keep in mind, the reason I use Hillsborough is it is the recent benchmark, as the only county won by Bush twice and Obama twice.

And Hillsborough is doing a nice job of playing its role as the state benchmark. It should be about 6.5% of all state-wide votes, and that is pretty much where it is in early voting (6.51%)

In the end Hillsborough went to the Democrats, but it was the “1 in 12” time it didn’t reflect the state (or the country).

Our second back-up idea was that if the Democrats lost Florida, winning a “new state” of Colorado or North Carolina, given the Obama starting advantage of having a majority, would send them over the line. What we, and most, failed to see was the “flipping” of Michigan and Wisconsin (though Michael Moore did correctly see this) which were not considered battleground states, that offset that loss.

WHAT YOU MAY NOT KNOW ABOUT TRUMP’S VICTORY:

1. The Democrats lost this as much as Trump won this: There is a large school of thought that this was all about the “angry disaffected working class whites” coming out to vote. Yet the aggregate data doesn’t back this up. In the chart below, you can see that Trump got even less votes than Republicans in the last three elections. The really big change is there were 10 million less votes for the Democrats than in 2008. So yes there may be a surge of these vote switchers in the Mid-West, but they are offset in the other direction somewhere else.

There is a path back for the democrats: Get people to vote! Not even new ones, just the ones that voted last time! This is why from a longer term perspective, the picture isn’t as rosy for the Republican party.

FIGURE 2 – NUMBER OF VOTES PER CANDIDATES SINCE 2000 US ELECTIONS

2. Gary Johnson should be given an ambassadorship:
Haven’t heard of Gary Johnson? He was the libertarian candidate that was the deciding factor in the end. He was why Clinton could win the popular vote but lose the election (which has only happened once before in 100 years).

It is difficult to imagine in a preferential voting system that more than 50% of preferences would have flowed to Trump. More likely is that there was a relatively high number of “small l” liberals voting for him.

FIGURE 3 – VOTES PER CANDIDATE IN FLORIDA 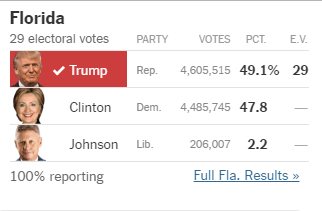 In Wisconsin it was even more pronounced, with a 27,000 vote loss and Johnson with 106,000 votes. This goes on through a number of swing states. Johnson played a “spoiler role” in the result.

FIGURE 4 – VOTES PER CANDIDATE IN WISCONSIN 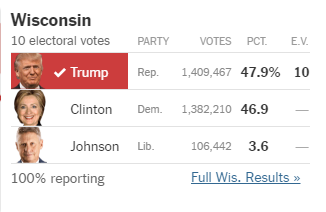 For all those anguished American readers out there, the lesson is simple: get out and vote and don’t “throw” your vote away!
Next up – market implications.