Australians seemingly have a love affair with Australian banks. They get their home loans through them; deposit their money with them; and then plough their superannuation back into them (via both the holdings of Superannuation funds that generally have 30% held in Australian equities of their assets and SMSF’s who like their full franked yields)!

And to be clear, this has served them well: house prices have increased dramatically in the last 39 years and the shares of, say CBA, have gone up at 11% per annum compound since 1991, plus a very handy 5-6% dividend yield along the way.

It has been a lovely symbiotic relationship: Your home loan liability is the bank’s asset and your interest payment is their revenue line, so the increasing house prices have led to large average loan sizes, higher revenue and low default rates (which didn’t matter anyway as the house could be sold without a loss largely) and the homeowner benefits from the leveraged upside of rising prices. Beautiful.

But as we draw towards the end of this great expansion, one of the longest in recorded history in the developed world, this love affair may start to sour. In recent weeks we have seen both Westpac and the NAB tap the market for capital raisings to shore up their balance sheets ahead of changes to global rules governing the amount of capital banks are required to hold. These rules are likely to require at the very least a limit of the payout ratios going forward, as banks are loath to cut their dividends.

Further their revenue line, is coming under pressure from APRA to lend less to investors. And this is all occurring with them trading on some of the highest multiples in the world!

With that in mind, offshore banks compare favourably. One of our favourite picks is Wells Fargo in the United States. Some readers would probably already be aware of this bank, it being a long-time favourite of legendary investor, Warren Buffett (we’d like to think he followed us in after reading about our holdings, alas not!). It is one of the largest full-service banks in the US with over 6200 branches across the country. This large branch network has helped to build an outstanding deposit gather business (this matters as deposits are a ‘cheaper’ source of funds than going into what is called the wholesale market, where Australian banks have traditionally had to raise capital).

As such deposit costs are very low by industry standards and have been growing rapidly over several quarters, enabling it to develop a ‘war chest’ to increase lending when economic activity improves. In the meantime, it enjoys an above average net interest margin.

This also leads to the discussion on capital requirements, the reason for the NAB and Westpac raisings. Wells Fargo through the GFC and afterward has had one of the highest capitalisation ratios in the US and needs no new capital and is a leader in the annual stress tests conducted by the Federal Reserve.

Its mix of businesses is also well diversified, with a substantial portion of the revenue coming from fees on less cyclical businesses, such as mortgage servicing, wealth management, trust and payment processing. If we compare this to Australian banks, our local banks (as discussed) have lower capital levels but also have a heavy exposure to one market: mortgages. Their interest margins are lower here as the growth of mortgage debt has seen deposits unable to keep up.

The below table summarises some of the key differences. 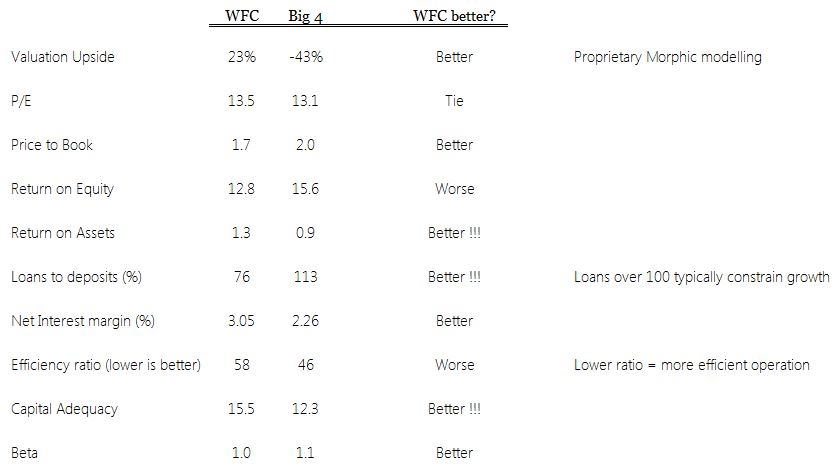 We see these as compelling reasons to diversify out of Australian banks and into holding stocks such as Wells Fargo, where the risks are lower at prices that are better.

To finish this blog we’ll touch on an area, that gets little discussion in mainstream equities in Australia: shorting stocks. One of the benefits of using Morphic is ability to go long or short stocks, which enables us to make money from falling stock prices as well as rising ones. Shorting is more difficult than going long a stock, but if executed successful enhances returns whilst lowering risks for investors.

Most people by now will have seen the fall in the oil price and whilst there has been a recovery from the lows of earlier this year, remain much lower than last year. This is largely being driven by Saudi Arabia not cutting output to try and force some of the new shale oil producers that have emerged in the US and Canada to reduce production.

With prices down here, we are seeing CAPEX plans being scaled back and jobs cut to maintain profitability. In many respects this is not unlike what we are seeing in the Iron Ore market – the low cost producers are trying to drive the higher costs producers out of the market, so they can regain control of the market – control they lost by letting prices stay too high for too long.

Texas is the renowned oil capital of the USA and within that Houston is the centre with many companies based there. So if we have a look at economic conditions in Houston…well frankly they make Perth look good. Businesses are saying that conditions are almost as bad as during the last recession. Ultimately this is not going to be good for banks focused on this region as the effects come through in higher loan losses and lower demand for credit.

So we are short two banks in Texas: Cullen Frost based in San Antonio and Prosperity Bancorp based in Houston itself. We would expect these banks to continue to underperform the broader range of banks in the USA over the next few years.