Anti-predictions for the second half of 2015 – Part II

Anti-predictions for the second half of 2015 – Part II

THE EUROPEAN PERIPHERY WILL NOT BE TESTED AGAIN IN 2015, AS MEASURED BY SPANISH BOND SPREADS.

The escalation of the Greek debt crisis in 2015 acted as the first big test of many firewalls and confidence building measures that have been built by the ECB. These measures were added to mitigate banking or sovereign risk and cross-border contagion. The markets’ recent verdict has been that the ECB has succeeded.

In prior periods of heightened anxiety in Europe between 2010 and 2012, the spread between yields on Spanish ten-year debt and their German equivalent traded in a huge range between 60bps to 600bps. In this recent episode, the spread traded in a much narrower (and lower) range of 100bps to 170bps. 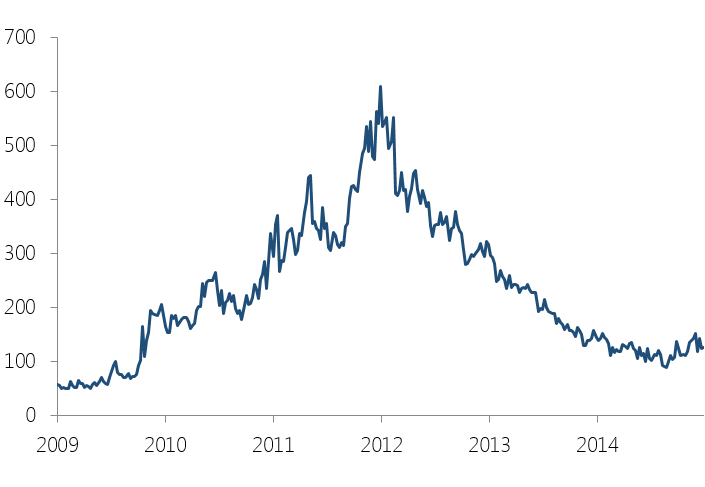 With the can kicked firmly down the road (for now) and Quantitative Easing continuing apace under the ECB for the rest of 2015 and through 2016, we see this spread returning to the lower end of the range, particularly when we combine that monetary easing with improving Spanish data: Spanish Retail sales for example have returned to pre-GFC trend levels.

THE AUSTRALIAN DOLLAR VS THE EURO WILL NOT FINISH THE HALF BELOW THE CURRENT LEVEL OF 0.67

And from the first flows the second: whilst we are long term bears on the Australian dollar, the second half probably won’t be as bad as the first for it, particularly against the Euro. Australia’s rebalancing is going a bit faster than we expected a year ago and we don’t see the local market risks as threatening to turn into a bear market yet. Below is a nice chart produced by PIMCO showing just how quickly the tourism sector has responded with new jobs, thus far offsetting a good portion of mining jobs lost. 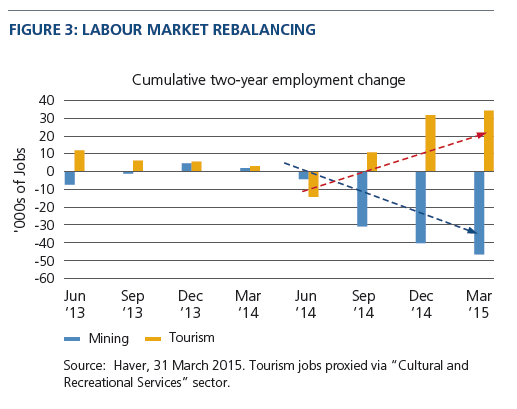 On the other hand, the recent destabilisation to market confidence caused by Greek crisis means the ECB money printing programme, which is already due to run until the end of 2016, may even get extended. If one considers that the Federal Reserve 7 years after starting QE has yet to raise rates and one would argue the US labour market is more dynamic than the European labour markets, you could feasibly still see QE programmes in Europe in 2020!

As such we would suggest on the “loser of the ugly competition” test, the Euro has more downside from here. 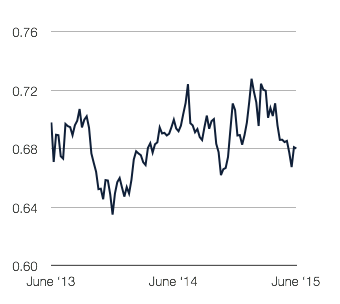 THE KIWI WILL NOT OUTPERFORM THE AUSSIE

We finish with a look at across the ditch at our near neighbour – New Zealand.

Things had been going along well there as milk prices stayed relatively high and housing boomed and so did the economy, with interests having to rise to slow the economy. Australia with it’s falling iron ore prices and interest rate cuts looked more like a basket case. This helped push the AUDNZD exchange rate to near parity for the first time in nearly 30 years.

But in 2015, New Zealand has been pulled into the global commodity sell-off, with its major export, milk, down 30% this year. This has seen the Reserve Bank of New Zealand (RBNZ) move from hawkish to neutral, and more recently to an easing bias, all in the space of six months.

New Zealand is now likely to make more interest rate cuts than Australia over the next year and this will keep up the pressure on the New Zealand dollar. Further into the year, New Zealand’s far greater dependence on agricultural exports than Australia could see it suffer more from the severe drought that will arise if the threatened El Nino effect materialises. This is likely to further exacerbate the currency divergence across the Tasman.

All together this suggests that change in the direction from positive to negative for the Kiwi that begun earlier this year, will continue through to end of the year at least.