Amoral MBAs and the creation of Trump - Morphic Asset Management

Amoral MBAs and the creation of Trump

AMORAL MBAs AND THE CREATION OF TRUMP

MBA elites and the universities that educate them have failed society as a whole.

Writer’s note:
This article was written two months earlier, well before the emergence of the Facebook data scandals. Once you read the article, it becomes obvious how Facebook as a company reached a point where selling your data to anyone who wants it, including sponsoring scammers, was just deemed part of business practice. This lack of morals or sense of what is right is entirely what one would expect from a company founded by a particularly ambitious 21 year old. Of course he went to Harvard.

This is the second part of the series on “Defend the indefensible”, part I being the look at Venture Capital’s role in the fall of innovation.

Now we take on most senior and middle management in large organisations, management consultants, and a large chunk of the investment banking community. We draw again from “The Golden Passport: Harvard Business School, the Limits of Capitalism and the Moral Failure of the MBA Elite”, but this time focus on the major thrust of the book: that the MBA elite and the universities that educate them have failed society as a whole.

There is no denying that today the gulf between the professional class – “the globalisers” – and the working class is as large as it has been in the last 100 years. We have seen that both in Brexit and the election of Trump. Today the professional class has more in common with their peers in say New York and London, than they do with their fellow countrymen living a few kilometres away. I write this, knowing that I am one of them.

One of the many fascinating things about the Trump victory is that this isn’t a poor against rich divide socialist class warfare. Joan Williams in her essay on demographics writes (emphasis added):

One little-known element of that gap is that the white working class (WWC) resents professionals but admires the rich. Class migrants (white-collar professionals born to blue-collar families) report that “professional people were generally suspect” and that managers are college kids “who don’t know shit about how to do anything but are full of ideas about how I have to do my job,” said Alfred Lubrano in Limbo.

Michèle Lamont, in The Dignity of Working Men, also found resentment of professionals — but not of the rich. “[I] can’t knock anyone for succeeding,” a laborer told her. “There’s a lot of people out there who are wealthy and I’m sure they worked darned hard for every cent they have,” chimed in a receiving clerk. Why the difference? For one thing, most blue-collar workers have little direct contact with the rich outside of Lifestyles of the Rich and Famous. But professionals order them around every day.

The concept of managing yet not owning a business – a professional manager – is a relatively recent phenomenon. The idea that college graduates should run businesses wasn’t just new; it ran counter to the way things had always been done.

Up to the 1800s, you either had to apprentice or be a member of the family. And usually not the most impressive member of the family at that: if a rich family had two sons, it was the one who couldn’t get into Cambridge who got to stay home and run the business, not the other way around. But the industrial revolution saw companies becoming large enough to need “middle managers”.

To fill this expanding need for managers, in stepped the Ivy League Universities. As opposed to what many people think, Harvard was not the original business school: Wharton at University of Pennsylvania founded in 1881 was the first and Tuck at Dartmouth founded in 1900 the first graduate school conferring a Master of Science in Commercial Sciences, the predecessor to the MBA. Harvard followed suit in 1908 and whilst it might not have been the first, it quickly became the most dominant, and it has never relinquished that position.

Yet the problem then, and I would argue still today, is the being a professional manager has none of the hallmarks of other professions. There is no Hippocratic Oath equivalent; there is no agreed “body of knowledge”; there is no ideal of service. And I will argue it is this deficiency that has and does continue to cause problems in society.

In his book, McDonald argues that over the past 100 years, HBS has never truly figured out how to integrate ethics into its curriculum – though it’s not for lack of trying. The problem is most MBA courses are functional; ethics is philosophical. The particularly ambitious cohorts that attend the top MBA schools are impatient and would argue they have never committed a meaningful ethical transgression. Duff argues that many simply had neither the need nor the opportunity at age 26 to cross the line.

I am not arguing that doing an MBA will creates unethical professional classes, rather there seems to be an adverse selection problem where a certain type of ruthless and ambitious personality type enrols in a top MBA course.

Stearns and Borna (1998) measured MBA students against felons imprisoned and found the felons in some ways to be more ethical. Another study showed across 200 companies that the likelihood of corporate crime increased when members of the management team had either graduate business education or military experience. McDonald:

The fact that HBS attracts self-styled future leaders also raises the question of whether someone whose goal is to be a leader is actually the right candidate to be leading anything. Deresiewicz recalls an anecdote of one Harvard admissions interview: “Harvard is for leaders,” the interviewer said, “so what do you want to be the leader of?”. The answer: “I don’t know . . . something.” That’s not leadership. That’s aimless and unfocused ambition.

“What they mean is nothing more than getting to the top,” says Deresiewicz. “Making partner at a major law firm, or running a department at a leading hospital, or becoming a senator or chief executive or college president. Being in charge, in other words: climbing the greasy pole of whatever hierarchy you decide to attach yourself to.”

All this dwelling on ethics and MBA matters, because these are the people who are running the largest companies in the world: nearly a third of the world’s largest 500 listed companies by market capitalisation have a chief executive with an MBA and HBS is top with more than twice as many as any other school (Figure 1). And they are paying themselves more and more to do it. Fifty years ago, CEOs were paid roughly 20 times as much as their employees. Today, that ratio stands at a staggering 354-to-1 (McDonald). 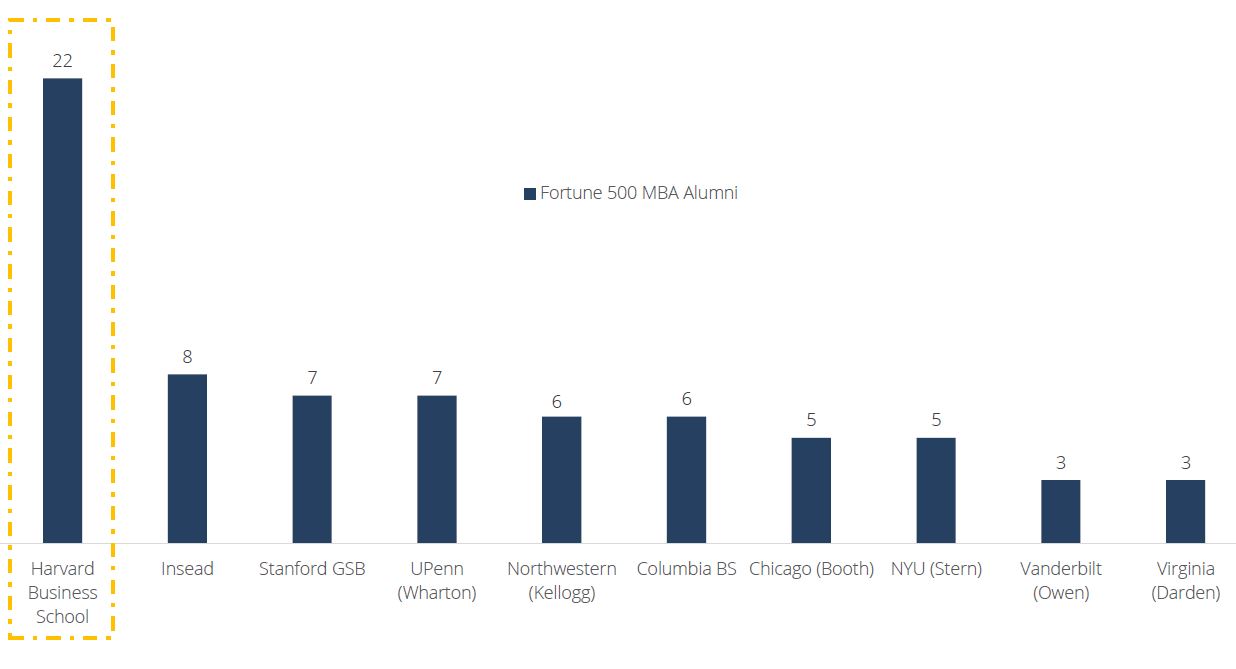 One can see how this is viewed from a blue collar workers perspective: a group of amoral at best 30 year olds are pushing them around, probably working with McKinsey Consulting (who took at one point over 20% of elite MBA graduates) taking away the biscuits at their coffee break, and instructed by a CEO who never worked their way up in the industry and didn’t build the business, that was parachuted in by the Board. Donald Trump, on the other hand, built his business through hard work with his family.

The good news is that there seems to be a shift taking place amongst millennials. The concept of “greed at all costs” may be waning after forty years in the ascendancy. This is needed because the role of a manager isn’t going to go away, so it needs to be rehabilitated. With some luck and probably government intervention, MBA programmes might produce less Enron/Skillings and more people willing to work for NGO’s.

To quote Casey Gerald, HBS’s student speaker for the class of 2014:

… the tragedy of the Business School is that you can use that ability to do two things at once, to build great companies and destroy the planet in the process. Or its people.

Roert S. McNamara was an HBS alum. He helped turn around Ford Motor Company, and then went on to wreak destruction in Vietnam. We have to have a conversation about which one we’re doing—and why we should be doing one and not the other. There’s nothing ambiguous about it.” 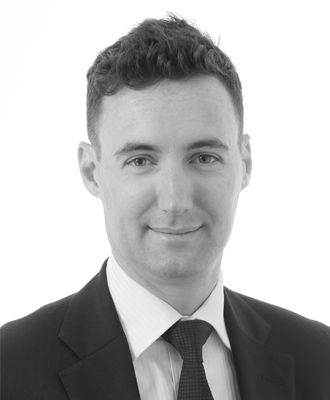 Chad co-founded Morphic Asset Management in 2012. He was previously a Portfolio Manager and Head of Currency and Macroeconomics at Hunter Hall for five years. He has worked at BT Investment Management, Putnam and the Federal Treasury over his 17-year career.