How active management must change to survive in today’s world of rising passive investment strategies.

The debate over active versus passive investing has emerged as one of the hot topics in funds management in the last few years. With 35% of US equities now run via passive strategies and no net flows to active US managers in the last six years (see Figure 1), it would seem the tide of opinion is running in favour of passive currently.

This quarter’s Perspectives series piece has been split into two parts to make the digestion of this large and contentious area somewhat more palatable for the reader. The first part takes the side of passive and argues that active management, particularly in US large caps, have gotten themselves into this situation by failing to adapt their business model to changes in the understanding of the investment process and charging fees on their old legacy structures and incorrect benchmarking. 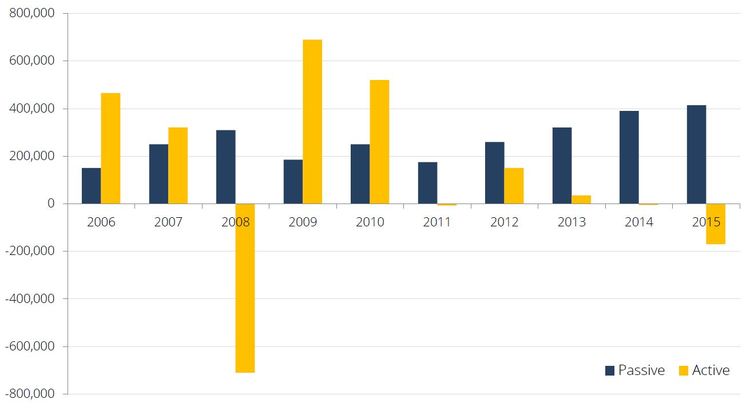 A SHEEP IN WOLF’S CLOTHING?

Figure 2 below is a chart of an active fund sold in Australia. So that we’re not singling them out in particular, I have removed dates and scale and also what the benchmark is, so it could be an international or domestic fund. Looking at the chart, what is quite striking is the outperformance generated over that period. A casual reader could be forgiven for thinking that this is an outstanding manager.

The second chart below (Figure 3) is where I swap out the stated benchmark for a factor/style ETF. What is apparent is that most of the alpha that was generated by this fund was actually what I’d call “style vol” or smart beta as it’s commonly called these days. It’s not to say it’s definitively not alpha, rather it’s just not the alpha the investor signed up for when they bought a “bottom up stock manager” and can instead be replicated cheaply in an ETF.

FIGURE 2 – AN ACTIVE AUSTRALIAN FUND PERFORMANCE VERSUS THEIR BENCHMARK 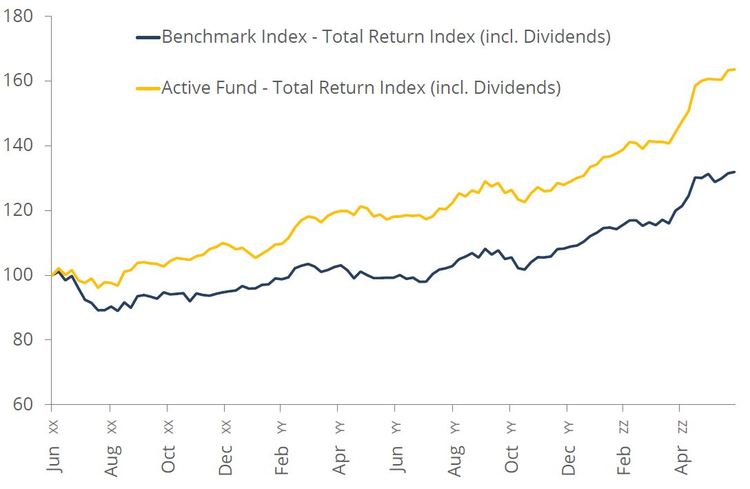 Now this of course can also go the other way – a manager who would appear to be underperforming badly may just be suffering the inverse effect with the factor/style being out of favour. Perhaps at this stage a brief overview of the industry history will help give it some context to how we got to this situation.

From the start in the 1800’s and up to the 1940’s, equities were actually seen as speculative instruments reflected in the saying of the times “gentlemen prefer bonds”. The concept of equities as an investable class arguably begins with the Graham and Dodd text “Security Analysis” which reached the conclusion that if one is relying on the backing of bond collateral, the investment is likely to have been a failure and suggested a more profitable route was to analyse the equity tranche for a better risk adjusted return.

In the 1950’s, this acceptance was built on in the US post war period as people began to save and its coronation as an asset class was arguably the changing of the “prudent man test” to adjust for risk.  Then through the 1980’s, equity ownership surged in the US as the transition to becoming the accepted dominant form of savings.

At first, when looking at an equity manager to assess their skill level, returns greater than the market average were deemed to be skill. The work in the 1960’s in academic studies of finance showed that some of this return could actually be explained by “beta” – that is, the risk or volatility of those stocks were higher on average than the market, or simply the return of the market adjusted for that beta.

From the 1980’s onwards, research of the industry started focusing on style and size. It was shown that on average, small cap stocks outperformed large cap stocks. So the next stage was to assign managers to small cap benchmarks and measure them against that. Conversely value and growth (1) in the style space were also isolated.

More recently in the last 15-20 years, research has identified other style factors such as “momentum”. This is a particularly intriguing factor, as it can occur in any stock (be it value or growth or small cap) and has one of the longest standing records of producing returns greater than the market. The list continues to grow, with Lipper noting that there are now over 300 factors which have been identified!

Knowing what was causing the extra return was one thing, but isolating and selling that was where the ETF innovation enabled this to be sold in a simple form to average investors.

HOW IS SMART BETA DIFFERENT TO PASSIVE?

In some respects, this debate is not new – Vanguard pioneered passive strategies in the 1970’s. The development of Exchange Traded Funds (ETFs), however, were the catalyst for mass adoption of passive strategies as the ability to settle through a brokerage account with daily liquidity vastly simplified the process.

ETFs can replicate these passive funds that always existed, as well as specific sectors inside the index (for example the consumer staples sector or the resources sector). These types of ETFs are classed as passive and have now grown to include debt indices, commodities and even volatility! Figure 4 below shows a summary of the differences.

FIGURE 4 – COMPARISON OF ACTIVE VERSUS PASSIVE STRATEGIES AND IMPLEMENTATION FORM 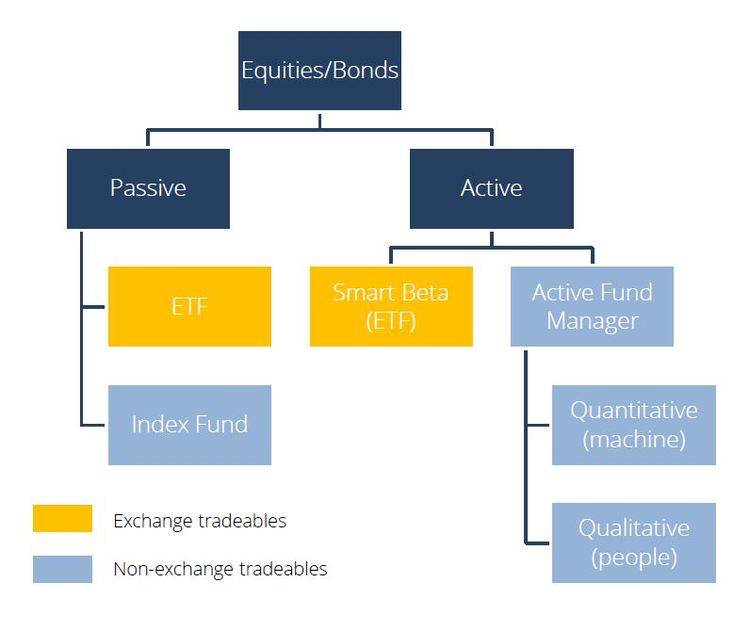 The newer related debate is on “smart beta” – the phrase from which the title of this piece draws its name. These ETFs occupy a grey area somewhere between active and passive. Here the strategies seek to replicate factors and size anomalies discussed above (such as momentum and low volatility) that used to be thought of as active alpha but have now been re-classified as a type of beta.

It is these factors that have come to be known as “smart beta” or variations thereof. In a sense they are active equities and their aim is to be better than the index. This is how they are distinguished from passive ETFs. To make matters worse for the beleaguered fund management industry, the academics working on factor risk analysis reached the simple conclusion that if these factors generate most of the outperformance, why do we need humans?

The growth in computing power over the last 20 years since the mid 1990’s has seen the emergence of new active managers, ones driven solely by computers such as AQR out of the US, founded by Cliff Asness whose firm now runs over $100bn in quantitative based strategies. They seek to use these factors to generate excess returns, much as an advisor would do it now through an ETF, but in their case directly through stocks in a systematic way.

Asset Consultants, who provide advice to large superannuation funds globally on where that money should be invested, have seen their power grow considerably over the last 30 years. Aware of this developing field of research, they reached the conclusion that the best way to create alpha was to “Style box” managers.

What this meant in practice was that each fund manager would be given a subset of equities to focus on, say small cap US value equites, with a hurdle or benchmark being the index of the relevant subset. In this way, managers would not be able to charge fees for one of the factors above. And for a time it seemed to gain popularity, particularly through the 1990’s and early 2000’s.

But what became apparent was that very few managers were able to consistently outperform when the investment range was set so narrow. Further, the “blending” where a consultant took a selection of each of the styles and put it together, when adding in the consultant’s fees and manager selection, didn’t seem to generate excess returns.

And this is where the industry finds itself in 2016: attacked on one side from low cost options which are pushing down fees (see Figure 5 below) and under pressure from consultants to outperform in narrow sub-sets on the other side. 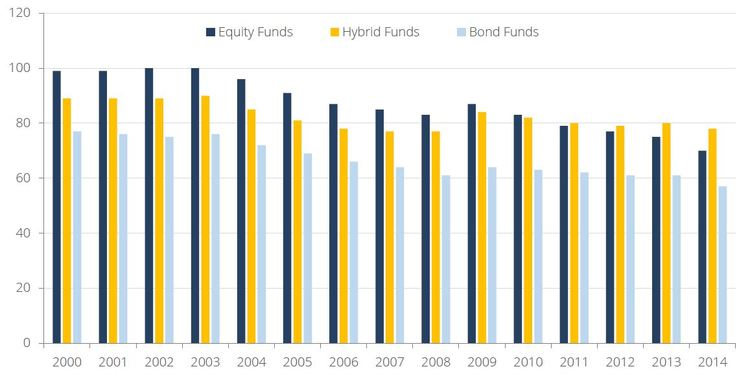 THE INDUSTRY RESPONSE – TILTING AT WINDMILLS?

Thus far the funds management industry has responded rather poorly to these threats. In some respects, this should not be surprising: incumbents over the world seek to protect their position first and foremost as there is a built-in ecosystem with all of its costs to protect.  Change has been most evident in the USA, with pressure on those managers, with Australia still perhaps a few years behind in the growth of ETFs.

With so little alpha to go around, particularly in the US, it is unsurprising that post fee returns for the industry is less than the stock market. (2)

For the moment the industry response in the USA has been to focus on three areas:

It really would seem that all roads lead to ruin for the funds management industry, particularly in the large fund manager space. Narrowly boxed in on their styles; running too much money to generate excess returns and under constant pressure to cut costs. What are the grounds for being optimistic?

Part II of this Perspective Series will look at what a reformation could look like inside the industry and what players may be the winners or losers from this.

(2) I do however disagree with the assertion from one allocator that this is reflective of the low intelligence of fund managers, which seemingly belies a lack of understanding of markets. Excess returns are low for precisely the opposite reason – the level of analysis is so intense today!

(3) One may argue Warren Buffett proves otherwise, though AQR in a thought experiment created a synthetic Buffett (link here), with the conclusion that even those returns can be replicated when allowing for leverage (average leverage of 1.6 to 1) and allocating to Quality and low beta as factors. Stock selection doesn’t add as much value as people think for Buffett.

(4) We would contend it is ‘dirty beta’ that provides style risk as ‘alpha’ as the size of the smaller positions  and law of large numbers would suggest stock selection as a factor is limited.