To look forward to this half, we need to look backwards.

Annie Duke’s “Thinking in Bets”[1] is one of the best books of 2018. Annie was a psychology student who went on to become a world series poker champion and this is her book on how poker can help improve decision making in the real world. One of the key sections is on “resulting” – that being a tendency to judge decisions by their results rather than the process behind the decision. When was the last time you had a bad result yet said it was a good decision?

Our half year report from July 2018 outlined the “bear” case with three points that should work if there were a bearish outcome.

Firstly, the yield curve: our view was that it would continue to flatten and not invert and therefore not signal an imminent recession. The chart on page 15 of that report (also shown in Figure 1) had the market implied spread at 16bps in early 2019. Today it is…16bps. Major US economic data such as job creation didn’t slow over the last half, and the shape of the curve traded with that data. 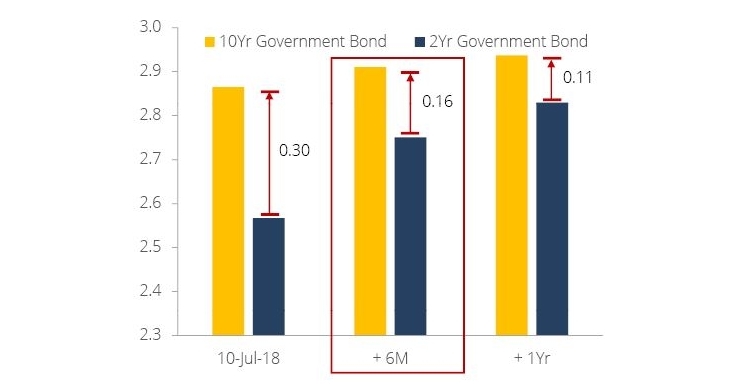 Secondly, “politics now matter”. Yet tariff risk fell, not rose: in December we saw Trump and Xi meet and agree to a tariff cease fire and negotiation. If politics did not matter, a de-escalation should be good.

Thirdly, “the USA is not the world”. This turned out to be the reverse to the bear argument: the US was the worst performing region in December. This is not what one expects in large drawdowns.

Put together, it is hard to escape the conclusion that ex-post reasoning on the year-end falls lack ex-ante justifications. Or more simply “I don’t like Mondays”[2].

Therefore, at this stage, we would conclude that the decision-making process has been sound, but assign a lower confidence to our own forecasts.

What did we learn about other concerns? Are there things we missed?

We would say the shrinking balance sheet of the Federal Reserve is a concern to a lot of participants (Figure 2). Rightly or wrongly, the Federal Reserve themselves have not been overly concerned, but they have come to accept the market is concerned. The shrinking of excess reserves in the US has been accompanied by an acceleration in bank lending which the Federal Reserve sees as a good thing. The large financing needs of the Trump Government seems to be the more likely liquidity candidate. 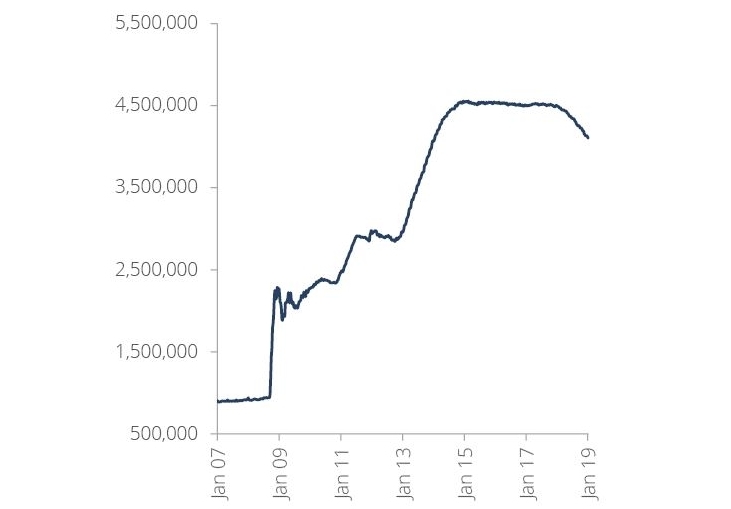 And why should the market rally over the next six months?

There are three axes to making money: fundamentals/valuations, positioning and sentiment.

Firstly, fundamentals: if the argument was that higher rates were a reason to be bearish, the good news is rates are much lower than where they were in October and the market expects no more hikes in 2019 (Figure 3).

On the other side, with oil prices now 30% lower, consumers will benefit from lower interest rates, lower gasoline prices and for the first time in this cycle, accelerating wages with wage growth in the USA now over 3%. Whilst this may be pressuring margins for some companies, it is difficult to see how this is “recession like” and it is recessions that really kill equity returns.

Using forward P/E’s, valuations, whilst not rock bottom, are cheap for many of the world markets. In forward earnings (Figure 4) over the last six months, there are minimal downward revisions, with a P/E de-rating or “fear of the future” being the driver. 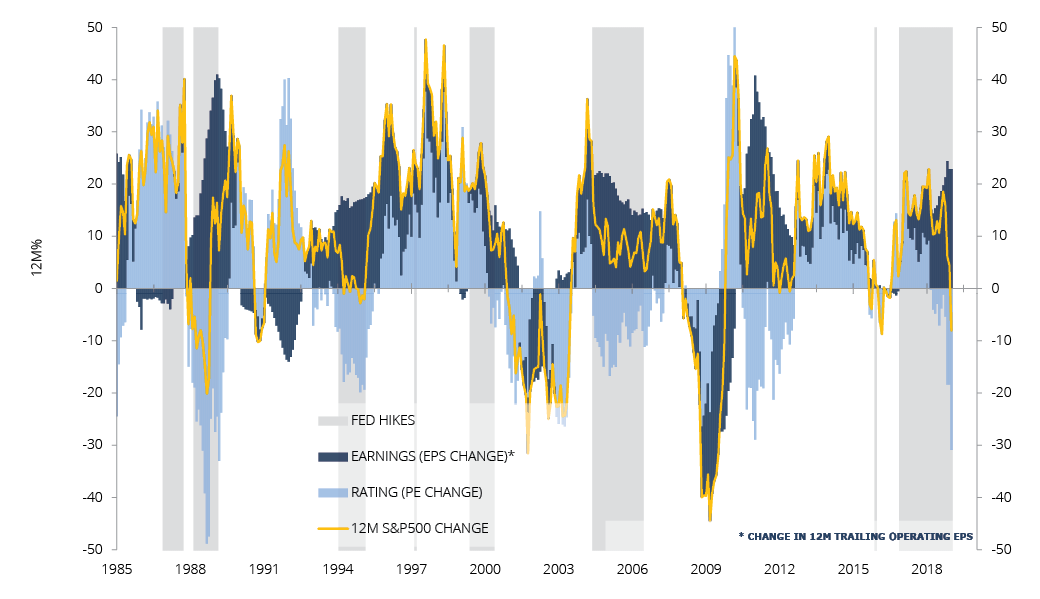 Secondly, sentiment. This refers to what investors say they “feel like”. Bank of America Merrill Lynch publishes an index that measures this from 0-10 with 0 being “fear” and 10 being “greed”. In December it was at 1/10 (in January it was 9/10). Sentiment is not bullish.

Thirdly there is positioning. It is one thing to say you feel worried, it is another to change your portfolio. Morgan Stanley data shows that Hedge Funds started 2019 the least invested in nine years; that redemptions in mutual and ETFs were substantial towards the end of 2018.

Together the three axes would suggest a bullish stance remains appropriate.

So, our base case is that the first half of 2019 sees a deceleration of headline US GDP and data as the one-off effects of the Trump tax cuts disappear, offset by a stronger consumption contribution. If the market thinks this economic slowdown is transitory, it will ignore the slowdown as long as the Federal Reserve is not making a policy mistake and hiking.

The biggest issue that we see is several broader measures of financial conditions are tightening. Credit spreads are wider, raising funding costs for companies and potentially increasing the risks of default in the future which happens before a recession.

It is also well-known that “monetary policy works with long and variable lag”, so the economy will not feel the recent hikes until late 2019 as they work through the system. The US budget deficit this year is expected to expand to 4% of GDP, issuing $1.3trn of net debt, unprecedented in expansionary times.

One potential positive is if the Chinese stimulus starts to have an effect. At this stage, the stimulus has been limited but could expand. The Chinese government appears to be extremely focused on not replicating the infrastructure and debt splurge of 2016. Stimulus this time is focused more on increasing personal consumption, whilst bad for Australian iron ore exporters, should be good for decreasing their trade surplus and the balance of the economy.

One of the most interesting things about the last quarters sell-off was that Emerging Markets outperformed the larger US market, consistent with what we wrote in the half year report in July 2018, despite not being the path we thought it would take to get there. This speaks to the three axes in alignment in this region.

The other quirk to note was the inability of the US dollar to rally in this sell-off. With the market removing rate hikes and equities bouncing, the US dollar might come under further pressure this year, though we would note the consensus view at the start of 2019.

This outlook was part of our Half Year Report published earlier this month.

[1] We’d highly recommend the book to those looking to improve both their investing and more general decision making in their lives.

[2] We all seek narratives to explain things. Often there is no reason, as Bob Geldof wrote in “I don’t like Mondays”.